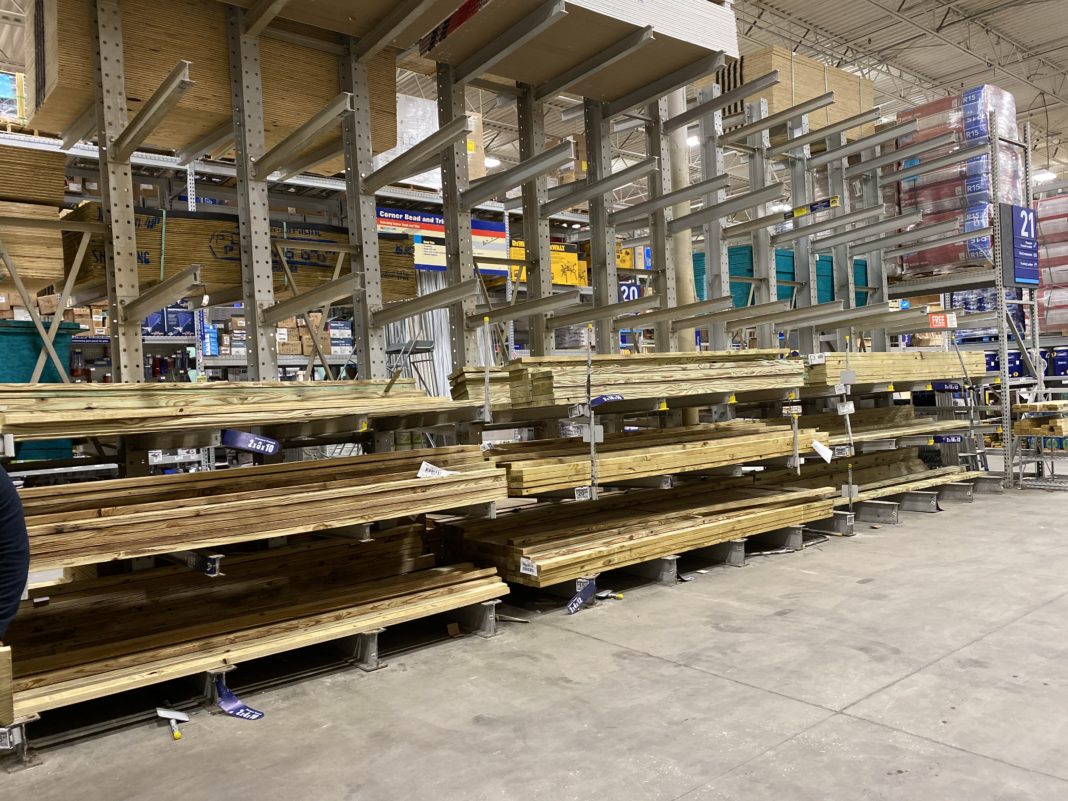 COOKEVILLE – The shortage of building supplies is just another lingering effect of COVID-19, according to one major building materials supplier in Cookeville, who said the shortage had driven some materials prices up over 400% and made others nearly impossible to even get.

“The building material shortage started when plants shut down because of COVID, and since then, it has trickled down to retailers,” confirmed one salesperson who wished to remain anonymous.

The first noticeable shortage wasn’t even in building materials, it was in appliances that are used to complete the new construction.

“A year ago, there was a shortage in appliances. You couldn’t get the appliances because you couldn’t get the parts from overseas,” said the salesperson. Whirlpool started telling retailers they couldn’t sell products in the negative, meaning selling the products pending the ordered shipment arriving.

“If I can’t put my hand on it, I’m not allowed to sell it,” said the retailer. “Appliances are hit and miss right now.”

Building professionals have resorted to renting pods and storing appliances. According to the salesperson, one local builder has 71 sets of washers and dryers in his personal storage, and they are trying to get him 27 sets of the additional 61 he needs for another project.

“It began with pine and spruce. We are fortunate to have contracts with multiple suppliers, and I had noticed we were getting in lumber actually from Sweden. It had a Swedish tag on it,” he said.

As the shortage of lumber escalated, it became difficult for many area retailers to get enough wood for their customers, with some even trying to buy it from other local retailers to meet their demand.

In an attempt to meet the local demand, one local retailer said that for large purchases, such as purchases by building contractors, he often has to make phone calls to “my guy at Quality Lumber, at Blue Linx and at Lumber Mills,” to see the availability, the lead time, what their price is, if spruce or pine is going up and what the panel products are doing. He said they would even call him sometimes and ask to buy it from him, but company policy said they can’t sell it to others if they are going to resell it.

Over the last 12 months, after lumber the next major shortage was in OSB.

OSB is a panel product that builders put on the side of the house and on the roof. Typically, at least 3-4 units are needed to build a small home. This is another product where other local retailers have tried to buy their stock, sometimes even posing as contractors themselves. This resulted in the retailer only selling larger quantities to builders that were purchasing their framing package or their lumber package at the store.

“With panel products, like OSB, everybody was running out, so I would get on the phone to my suppliers and ask them to get some more in here,” said the salesperson, who said that he tries to keep around 100-150 units stocked now to keep a good supply on hand, because a typical house takes 3-4 units.

COVID isn’t the only problem the building materials industry has faced. Just as businesses were getting back to work after COVID, winter weather took its toll. The snowstorms and power outages in Texas affected petrochemical companies creating a supply shortage of epoxy, polyester and vinyl ester resins.

“Recently the subfloor companies ran out of glue,” explained the salesperson. “Nobody could get the subfloor, not even my guys in Nashville, Knoxville.

“There’s a product called Advantech,” he said. “It’s a high-end subfloor that can take rain. You can even submerse it in water. And right now, there’s a major shortage of subfloors. If you build homes, you need at least 1.5 units to build a subfloor to build a house, and you can’t get it right now.”

Since subflooring is so critical to his top builders, the salesperson said that the minute he gets some in, he will call my top builders and say, “I got a unit in, do you want it?” and they will say “yes.”

“It won’t even make it to the sales floor,” he said. “I’ll tag it and put it sold out back and hang onto it for them. We do this for our top five to 10 pros.”

The shortage of resins has also led to shortages in plumber’s putty and drywall mud.

Shortages are now hitting items that most would think plentiful.

“It’s more of a challenge now, you come in the door wondering what you can get and what you can’t get here right now,” the salesperson said wryly.

Shingles are starting to become an issue with certain colors, specifically the HD which is a high-end GAF shingle. The HD charcoal shingle is becoming hard to get.

“Plumbing and electrical have been tough to get, electrical boxes and electrical outlets especially,” said the retailer. “Contractors are storing those ahead for the next two or three houses. Electrical wire has been scarce with prices going up at least 50%.”

Certain lighting and flooring are becoming difficult to get. Windows are between six and 12 weeks to get. Louvered doors can be up to 12 weeks. Fortunately, these shortages haven’t impacted costs as drastically as it did the lumber and panel products.

“Windows and Interior doors have gone up 20% over the last year,” said the salesperson. “Paint has remained relatively steady with prices increasing only about 5%.”

And some building products were affected positively in the short term by COVID.

“When everybody got their COVID stimulus money last year, everybody built a deck, so the TREX building materials sold down and haven’t caught up,” the retailer confirmed.

This is part four of a six-part series on real estate in the Upper Cumberland.