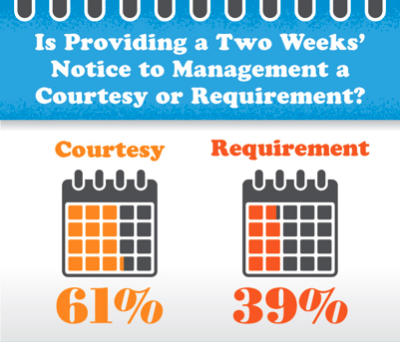 OKLAHOMA CITY —The majority of U.S. adults (87%) say employees are familiar with the concept of providing a two weeks’ notice to employers upon leaving. However, despite stating this advance notice is merely a courtesy (61%) as opposed to a requirement (39%), 53% believe companies would never rehire someone without it.

This is according to a new survey from The Harris Poll commissioned by Express Employment Professionals.

When thinking about the last job they resigned from, only 55% of adults gave their former employers two weeks’ notice, while another 18% did not. The proportion that didn’t give their last employer two weeks’ notice increases to nearly 1 in 4 among Gen Z (ages 18-26, 23%) and millennials (ages 27-40, 22%).

Four in five adults (80%) add that employees who do not provide adequate time for transition are viewed negatively by the company, and 77% worry the company would provide a bad recommendation. Still, 75% believe there are times when it’s appropriate to quit a job without providing a two weeks’ notice.

“Giving a two weeks’ notice is a requirement and it falls on the employee and the new employer,” said Greg Sulentic, Express franchise owner in Nebraska. “The need to find workers is a difficult process right now. Two weeks is not close to enough time. If employers are just dropping offers on new employees and not giving them time to grant notice to the current employer, then it’s unethical, unprofessional and sets the whole process off.”

Over the past few years, Sulentic says the number of employees providing two weeks’ notice before leaving has, without a doubt, decreased.

In Washington, Express franchise owner Stacey Snodgrass says that while companies may let employees go immediately after these workers give their notice, providing that two-week cushion is a professional expectation.

“Employees know the market is hot, and there are a lot of jobs,” she said. “They are afraid of letting their current employer and coworkers down by giving notice because of the labor shortage, which is why some avoid the conversation all together.”

While opinions vary, due to the hot job market, Sulentic says he would consider rehiring a strong employee who failed to give two weeks’ notice but would educate them on why it’s necessary. Snodgrass, however, feels differently.

“We have professional positions in my business, and our team members expect professional behavior from one another,” Sulentic said. “It’s part of our culture, and I would not rehire an employee who didn’t extend the courtesy from a turnover standpoint.”

“When there isn’t proper notice, a replacement employee must be found quickly, so the full interview and qualification process is shorted,” she said. “The new employee may not be as qualified or be as strong of a fit for the company culture. The tension that can result from this situation results in lower morale and further turnover.

“The employee who bails without giving appropriate notice also typically communicates with the existing team regarding the new job they left so quickly to fill and convinces their former coworkers to look at other options. More turnover follows, which results in ever-deepening morale issues for the remaining team.”

Although it may be tempting to quickly leave your old job behind, you could risk garnering a negative professional reputation if you don’t at least offer to wrap up loose ends.

The survey was conducted online within the United States by The Harris Poll on behalf of Express Employment Professionals between April 11 and 13, 2022, among 2,061 U.S. adults ages 18+. Data were weighted where necessary by company size to bring them into line with their actual proportions in the population.