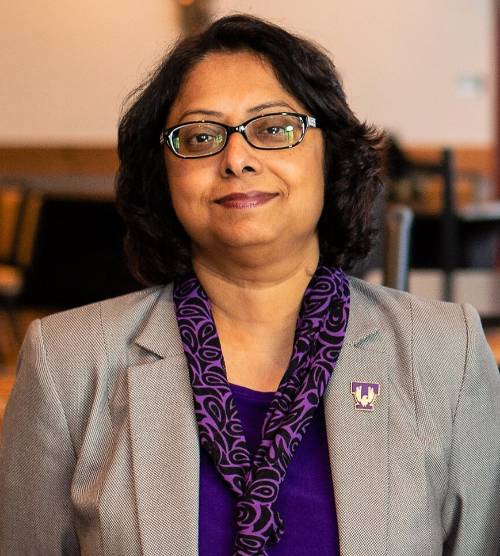 But on April 29, the celebrated computer science professor – widely known for her passion and contributions in the field of cybersecurity – is slated to deliver parting words before well-wishers as she nears the conclusion of her 16-year career with Tennessee Tech. In early June, she’ll be leaving the university for a new position with the National Science Foundation.

The farewell event begins at 3:30 p.m. on campus at Stonecipher Lecture Hall. Everyone is welcome, especially computer science students and alumni. Attendees should RSVP by April 25 by emailing csc@tntech.edu. Virtual attendance is an option.

“Cybersecurity is such a vast, fascinating field,” Siraj said. “There are so many ways to contribute.”

And that’s exactly what Siraj has done during her tenure at Tech – always pushing forward with innovative ideas, projects and research, always striving to break barriers and create new learning opportunities for students.

Among her many accomplishments was the founding of the College of Engineering’s Cybersecurity Education, Research and Outreach Center in 2016 and serving as its director. Better known as CEROC, it outlines the pillars by which all its activities are aligned to increase the capacity and diversity of the cybersecurity workforce pipeline. Along with two federal cybersecurity scholarship programs, CEROC is a National Security Agency-designated Center of Academic Excellence in Cyber Defense Education funded by state and federal grants.

And that’s just for starters.

Siraj, who also serves as a member of Tennessee’s Advisory Council on Cybersecurity, has orchestrated a host of National Science Foundation-sponsored cyber and STEM events, workshops, panels, security awareness and training sessions, conferences and youth camps, both within and outside of Tennessee Tech.

In 2011, she was instrumental in starting the Middle and East Tennessee affiliate of Aspirations in Computing along with her colleague, now Emeritus faculty Dr. Martha Kosa, and, in doing so, established Tennessee Tech as the destination for an annual award celebration that highlights achievements of young women interested in computer science careers. The two were also responsible for the Engineering, Computing and Technology Spectrum Awards, hosted by the university since 2013.

The Women in Cybersecurity, or WiCyS, initiative, which orchestrates a variety of career advancement opportunities and events for women in the field of cybersecurity, came about in 2014, having been funded by the National Science Foundation. Now it’s a global non-profit organization with more than 6,000 members in 70 countries.

“I started it here as a small project,” Siraj said. “It is almost unreal to me that it grew into the largest community of women in cybersecurity around the world.”

Her motivation for starting WiCyS was the low percentage of women in the cyber workforce – just 11% in 2012. She wanted to change that.

And then there are the student-led CEROC interest groups (one focused on defense, another on offense, and a “capture the flag” group that engages students in various cyber challenges) as well as a CyberEagles Student Club. Workshops, competitions, simulated tests and cyber games through these groups and others are plentiful for students.

Outside of the university, Siraj’s work has been serving students and faculty from local and regional colleges, community colleges, minority-serving institutions and veterans.

When asked about herself, Siraj is quick to turn the conversation from “me” to “we,” preferring not to be the center of attention. She felt that way in the classroom too.

“I don’t enjoy standing in front of students or any other group of people, honestly,” she said. “I’m always very introverted by nature.”

But one thing has kept her motivated to do so.

“I feel joy when I can see that somebody has really learned something, and I can see it in their eyes that they got it,” she said.

Thinking back to 2006, when she began her career at Tennessee Tech, Siraj recalled that no cybersecurity program existed at the university. In her first semester, she started teaching a course in Cryptography and Network Security, which she described as “learning techniques behind obscuring sensitive information from unauthorized eyes.” Although more courses came later, it has been her favorite class to teach.

It was a time of significant transition in her life. She came to Tennessee Tech having just completed her Ph.D. in computer science at Mississippi State University. She and her family – husband (and colleague) Dr. Sheikh Ghafoor and their young son, Reetesh – moved to Tennessee the same day she turned in her dissertation.

“I literally submitted the final copy in the library, got into our van and drove to Cookeville,” she said.

Two weeks later, she gave birth to her daughter, Reethee. Two weeks after that, she started her faculty position at Tennessee Tech.

A new home, a new baby and a new career.

Lots of new students too.

“I told myself I would never miss a class just because I am a new mother,” she said. “So, I never did.”

Prior to coming to the United States to pursue higher studies in 1998, Siraj graduated in applied physics and electronics from the University of Dkaka in her native country, Bangladesh. After graduation, she worked for two years as a software engineer in Dhaka.

What drew her to cybersecurity? A good teacher – Rayford B. Vaughn.

“My professor at Mississippi State made me fall in love with the subject matter,” she said. “Learning about cybersecurity left me wanting to learn more.”

“Today’s world is all technology, right?” she said. “And you can’t have technology without ensuring that technology works properly. That’s what cybersecurity does. It’s not when you hear about attacks. It’s when you don’t. That means people are working to keep you safe.”

But more of those skilled people are needed, she said, noting that for every three cyber jobs, one is unfilled – as in around 600,000 unfilled jobs in the U.S. The demand is continually on the rise.

Thinking back to her time at Tennessee Tech, what stands out most for Siraj?

“My students,” she said. “All the wonderful students I had the opportunity to meet.”

The pride she feels for all her students is strong.

“Everyone has their own measurement of success, right?” she said. “For me, I feel the most accomplished when I see a student, especially a struggling student, who turns his or her life around, bounces back, takes control of his or her destiny, and becomes successful in their own ways. I think that’s the best part of my job.”

Tennessee Tech was Siraj’s first, only and last faculty position.

Through her new job with the National Science Foundation, she will continue to have opportunities to feed her passion for cybersecurity and make a nationwide impact on cybersecurity education and workforce development programs.

“My job is going to be empowering others,” she said. “That has been my ‘superpower.’”

Just one more lecture to go.