COOKEVILLE – It’s been than 20 years since talks of constructing a new interstate interchange for the city first began. On Wednesday, local, state, and federal officials gathered atop the newly-completed overpass that now provides a direct connection from the Highlands Industrial Business Park to Interstate 40.

“We’re celebrating a vision that started many, many years ago,” Putnam County Executive Randy Porter said.

That vision, a collaborative effort between city and county governments to build the fifth interchange, has opened the doors for future economic development within the Highlands Industrial Business Park and the western-most edge of Cookeville’s boundaries.

“When you look at the farmland, both to your left and to your right that, basically, had very little infrastructure going into it that now has a great road, (the interchange) has opened up a lot of that land for future development,” Porter said. “I think if (we) take a picture and look down both ends now, let’s come back in five years from now and take another picture. I think it’s going to be amazing what we see as far as growth.”

Despite navigating a series of small delays along the way, the Exit 283 interchange is now complete; coming in just under $24 million. Completion of the interchange, and Tennessee Avenue which spans the entire length of the business park, will likely further boost interest in the park – which is already home to Ficosa, Highlands Solar Park and, soon, Colorobbia as well as nearby Academy Sports + Outdoors’ distribution center.

Completion of the I-40 access point could also spur an increased interest in potential retail development nearby. In March, we spoke with Colliers International who said they are actively promoting 119 acres of undeveloped land, divvied up into six separate parcels, that immediately surround the interchange. 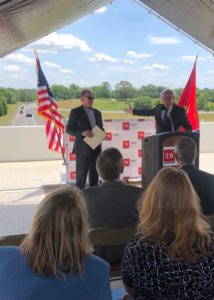 Much of the area’s recent successes, local and state leaders confess, is a result of the continued partnerships and teamwork between the entities.

“I tell folks as I speak in the other counties that I represent that if every community in the state of Tennessee could get along like the city of Cookeville and Putnam County, as well with their other state partners and federal partners, look what Tennessee could fully and truly accomplish,” said Senator Paul Bailey.

“This is a unique thing that happens here in the Upper Cumberland and we’re really blessed to have that,” Representative Ryan Williams echoed as he addressed the crowd.

Over the years, dozens of city council members and county commissioners have, at one point or another, been involved with one of the many stages of the planning and construction of the interchange since the first resolution was passed nearly two decades ago.

“When we looked back into the timeline of this project, we found the first city council resolution regarding this project was adopted on Dec. 17, 1998 – almost 20 years ago,” Cookeville Mayor Ricky Shelton said. “It’s impossible to pinpoint the moment this project came into being … this project has been the result of decades of perseverance and, whenever it started, I’m proud to stand before you as mayor when it’s finished.”

Since 2011, more than $127 million has been invested in roads in Putnam County. The joint city and county transportation committee is currently seeking public input on a survey intended to gauge the interest and level of prioritization of some of Putnam County’s state-involved road improvement projects.