CUMBERLAND COUNTY – Downtown Crossville seems to be moving toward a Renaissance. Numerous small businesses are seeing success in a part of town that – up until just a few years ago – had seemed largely abandoned.

A group of entrepreneurs and small business owners have slowly filled empty buildings with boutiques and restaurants; there’s even a coffeehouse and bar that specializes in craft and area brewed beers. In addition, a small community of downtown supporters continue to proselytize its benefits.

It’s a far cry from the 1990s, when the area seemed destined to slowly fade away, that is until the restoration of Palace Theatre and its reopening in 2001. As the Palace came back to life, a number of downtown property owners began improving the looks of their buildings, too.

Prior to the real estate problems of 2008, there were also plans for new construction, and in 2009, the city of Crossville looked at a multi-million dollar improvement project that included new sidewalks, street lighting, amenities, waterline and storm-water system improvements. The city had acquired a number of grants to help with the funding but struggled with reduced tax revenue and prioritizing other projects. In 2014, the plan was shelved and grant funds returned.

The city has since completed waterline improvements in the downtown area and is still looking at smaller sidewalk improvements stretched out over a multi-year timeline.

But while elected officials have largely stepped back – at least in a headline sense – others have come in. Stores like Dogwood Exchange, Cahoots Two Gals General Store, Posh Clicks, Grinder House Coffee Shop and Pearls, Lace and Southern Grace are all recent additions. In addition, groups like the non-profit Downtown Crossville Inc. (DCI), in a partnership with local businesses and with the help of the Rotary Club, have put together a series of increasingly successful events.

Every other first Friday evening, residents and families come downtown for a festival-like atmosphere called Friday at the Crossroads. Businesses stay open late, and there’s activities for kids and adults, live music and food. During summer months, the city and DCI sponsor music events at the Spirit Broadband amphitheater behind the courthouse; there are monthly cars shows spring though fall; and other events using the downtown area as well.

We spoke to several downtown Crossville business owners to get their take on the growth and their respective unique niches.

The Dogwood Exchange
The Dogwood Exchange, located a block off Main Street behind Military Memorial Park, has a unique concept. The store reuses and salvages items that might otherwise end up in the dump. Owner Angela Witzel came to Crossville after retiring from law enforcement and turned her hobby into a business.

Witzel shops thrift stores, yard sales and auctions looking for old and quality items that inspire her, like an old wooden television cabinet that she’s converted to a custom dog bed. She also does custom commission work and is currently working on an entertainment system for a woman’s house that must fit a specific space and is converting an old piano into a designer desk for an architect.

“Disposable things made today just don’t have the quality of older items that, once re-purposed can be passed down to future generations,” Witzel said.

Some of her ideas are inspired by finds on Pinterest.  Witzel enjoys that there are more businesses downtown and said the Friday at the Crossroads events help bring out new customers.

“We knew we wanted to be in downtown, and we wouldn’t want to be in a mall,” Legare said. “We love being able to walk down the block for coffee or to go get lunch.”

They described their partnership as “quirky.” Their lines often come from smaller companies, and while the products they carry have to be useful, they also have to be fun.

Cahoots also stocks home-brew products for beer and wine, a niche in big demand, according to the two gals. In addition, they have clothing for kids and adults, kitchen items, garden goodies, jewelry and gifts. Legare said they had expanded their retail space three times and could use more, but that will have to wait until next year.

Posh Clicks
One of the newest retail presences in downtown Crossville is Posh Clicks, a clothing boutique that started online in 2014 and doing trunk and party shows but has now leased space in the Fifth Street Market on West Avenue.

Wanda Reid, one of the businesses’ four co-owners, said their business grew out of these friends discussing the need for more shopping opportunities for young professionals for nice business attire and casual wear.

The brick and mortar portion of their business opened in September and gives customers a chance touch and try on the clothes plus it has given them a new audience where much of their previous business came from online Facebook and Instagram.

Reid said they’ve already expanded after customers pointed out they did not have men’s clothes. The men’s apparel line is called Fifth Chapter for the Fifth Street Market, and between the four owners, they have a total of five sons.

Grinder House Coffee
David and Stacia Willier own the popular Grinder House Coffee; David loves coffee shops, himself, and said there had been some coffee shops in Crossville before, but they struggled. He felt they needed to have food to make it successful financially. He said was looking for atmosphere and found that in an older building downtown.

“Downtowns have a unique environment that exudes community and brings people together,” Willier said. “Our goal is to bring people together and to nurture community. We encourage the arts. That’s why there is a guitar in the corner, an artists easel where someone can sketch or paint, a strong Wi-Fi and a comfortable space that includes tables and couches.”

Open since the end of May, Grinder House has been what Willier called “a leap of faith” with the investment of money, time and energy. The business has hosted a number of special events since it opened including some political events, musicians and open mic nights, and they hope to do more.

With Grinder House’s new head chef Ryan Serine on board, some revisions to the menu are underway.

Burke said they loved the location of their store – which boasts a view of the courthouse lawn. They enjoyed watching people walk around the square to do business.

“The environment is so nice,” Burke said, “and you can hear the chimes from the church three blocks away. Friday at the Crossroads has helped so much by getting the businesses together and bringing the community through here and many return in the days after one of the events to do more serious shopping, too.”

Many of these small downtown businesses are using social media – especially Facebook – to promote their business and to promote Friday at the Crossroads and other downtown events. The businesses cross promote other area shops to keep visitors in the area, suggest places to see or enjoy lunch or coffee and generally encourage exploration of downtown.

Burke summed up what others have said: “The downtown Crossville businesses are doing better than just a year ago, and it proves that just a small group can start something big.” 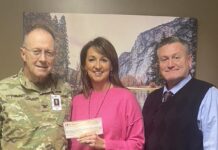 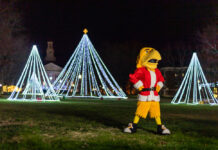