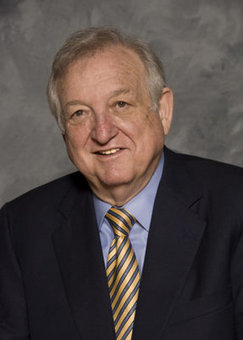 LIVINGSTON – Millard Vaughn Oakley, a Livingston attorney and businessman well known for his dedication to the region and education, has died. He was 91.

Throughout his life, Oakley was a leader in business specializing in property and economic development in the Upper Cumberland. He was also a founder and board member of First National Bank of Tennessee.

A tireless advocate for education, Oakley was a leader in recruiting a satellite campus of Vol State Community College to Livingston. And recently, he gave Cumberland University the largest donation in the school’s history. The $5 million gift includes the naming of the School of Humanities, Education and the Arts.

With financial gifts and gifts of service, he and his wife, J.J., have transformed Tennessee Tech’s campus for the betterment of students. In 2010, the university opened the Millard Oakley Center for the Teaching and Learning of Science, Technology, Engineering and Mathematics (STEM Center).

Oakley Hall, located on the Quad, houses offices and classrooms for the School of Agriculture and the School of Human Ecology as well as the Friday Café, and the J.J. Oakley Health Services is located at the corner of 7th St. and Mahler Avenue, on the east side of Bell Hall.

In 2015, Oakley donated Hartsaw Cove Farm, one of the state’s Pioneer Century Farms, along with the livestock and equipment on the property, to Tennessee Tech — a donation worth more than $9 million. This gift increased the size of TTU’s campus by 1,400 acres.

Tennessee Tech President Phil Oldham once remarked, “Millard is committed to making a better world for all. His service to the university has been great, but he also is dedicated to community building and education efforts throughout the region.”

Examples of his service to his home community include the Millard V. Oakley County Services Building that opened in Fall 2020 in Livingston and the public library in Overton County that bears his name.

Oakley never forgot his humble beginning and often told how he acquired and operated a shoeshine stand at age 15 in his hometown in order to pay for his room, board and tuition at Cumberland.

He was elected as a delegate to the Constitutional Convention the following year in 1952 and thereafter served four terms in the State Legislature ending in 1963.

His expertise in law took him to the U.S. House of Representatives where he served as General Counsel to the Select Committee on Small Business from 1971-1973.

Moving back to Tennessee, he served as Insurance Commissioner for the State of Tennessee from 1975-1979. Since 1980, Oakley has been engaged in business investments and real estate ventures. He also served on the Board of Directors and Executive Committee for Thomas Nelson Publishers, the world’s largest Bible publishing company.

Oakley is survived by his wife, J. Annette “J.J.,” whom he married in 1986, daughter Melissa Oakley Smith and granddaughter Kendall Vaughn Smith.