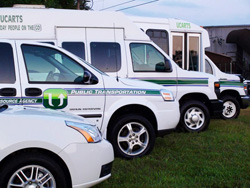 COOKEVILLE – Officials with the Upper Cumberland Human Resource Agency (UCHRA) say they will have to eliminate up to four programs – that served nearly 15,000 people last year – under the Trump administration’s recently proposed federal budget.

The agency compiled the list of cuts after receiving “a lot of local questions” since the budget was announced in March. UCHRA says four programs are currently scheduled for elimination, including:

The proposal also eliminates CSBG (Community Service Block Grant), an anti-poverty program, which contributes significant funding to commodities, Meals on Wheels of the Cumberlands, and the STAR program, which works to lessen dependence on public assistance. Those programs touched 18,638 people last year.

Some other programs scheduled for cuts include:

Potentially, Head Start may be cut, too; it is not confirmed, but Health and Human Services is scheduled for cuts (for UCHRA, that means a reduction of 18 percent, so possibly nine children affect).

“UCHRA has worked through nine Presidential administrations since it was first established in 1973,” officials wrote in a release. It is encouraging supporters to contact their respective representatives.

Trump’s budget says hundreds of programs and agencies would be eliminated.