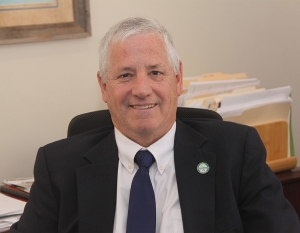 JACKSON – Tennessee Wildlife Resources Agency Executive Director Bobby Wilson announced his retirement at the conclusion of the Tennessee Fish and Wildlife Commission’s April meeting. Prior to the announcement, the TWRA presented its recommendations for the 2022-23 and 2023-24 hunting and trapping seasons at the two-day meeting which concluded Friday.

Wilson was named to lead the Agency in May 2020 following a unanimous vote of the 13-member TFWC to replace the retiring Ed Carter. The TFWC voted to name Deputy Executive Director Jason Maxedon as interim executive director. Director Wilson will continue to serve in an advisory role until his retirement becomes effective Sept. 1.

Wilson began his TWRA career in 1979 as a part-time fisheries technician. He became manager of Lake Graham in Madison County in 1980 before becoming a fisheries biologist in TWRA Region I from 1984-97. He served as assistant chief of fisheries beginning in 1997 before being named chief in the spring of 2010. He was named deputy executive director in September 2015.

The preview included harvest estimates for deer, bear and elk and included an expansion in bear hunt zones and requirement for tooth submission. There are no proposed changes to deer or elk seasons. An update on management of chronic wasting disease (CWD) was provided. The TWRA is following all current best management practices.

Previous and ongoing actions taken by the Agency and Commission to address turkey concerns were reviewed and changes were proposed for turkey seasons on several WMAs.  Several changes were proposed for WMAs throughout the state. Proposals were shared to change the requirements of Type 94 permits, the definition of muzzleloaders and to prohibit fanning for turkeys on WMAs.

A public comment period on the proposals is open and will continue until May 23. Information on the hunting season proposals will soon be posted on the TWRA website, www.tnwildlife.org. Comments may be submitted to TN.huntingcomments@tn.gov.  The TFWC will vote on the hunting and trapping proposals at its June 2-3 meeting in Nashville.