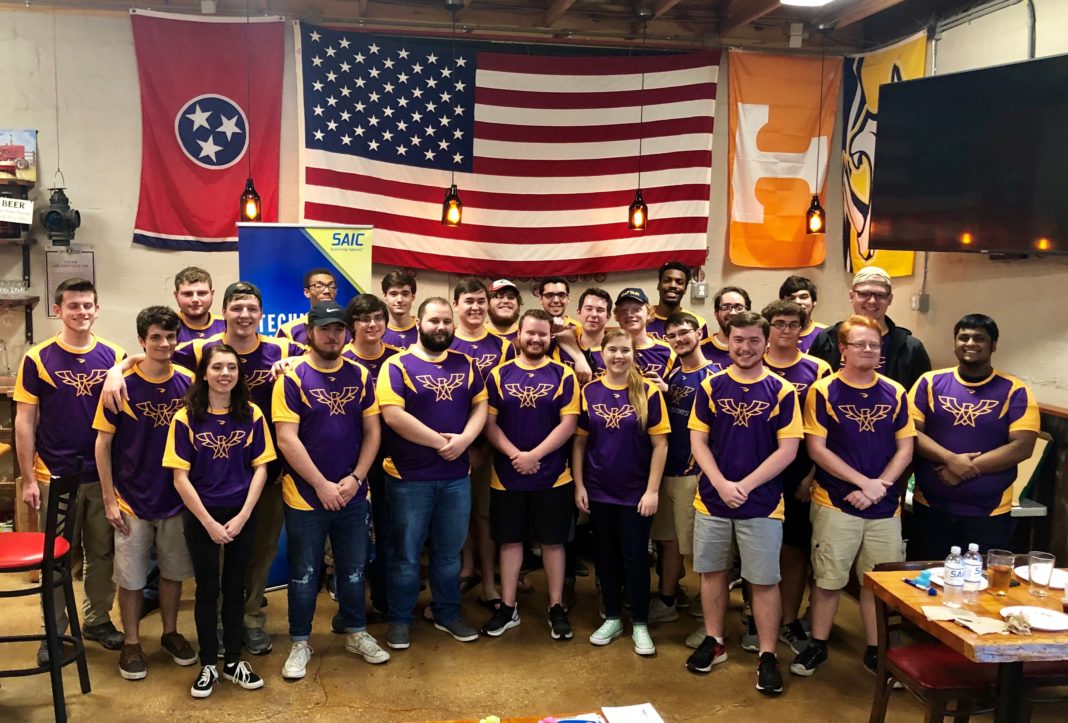 COOKEVILLE – Over the last few years, SAIC has brought a new awareness of computer intelligence and cybersecurity to Cookeville and the surrounding region, often partnering with Tennessee Tech to spread this message. Now SAIC is partnering with Tech to support a new modern addition to Tech sports by sponsoring the Tech eSports Team.

“I’m SAIC’s vice president for modernization, so the IT stuff falls into my world,” said Coby Holloway. “We’ve been working with the Cookeville community for a long time now and Tennessee Tech in particular. I’m a passionate gamer so when the opportunity came up for us to sponsor the eSports team, we jumped all over it.”

SAIC introduced themselves to the team by hosting a welcome party at Red Silo on Monday evening to give the gamers an opportunity to network with SAIC team members.

“SAIC is excited about extending our partnership with TTU beyond just the curriculum,” said Jill Patrick, SAIC site manager. “We’re just super excited to be able to sponsor this team because it’s going to be really fun. And, it’s a way for people that work in our office to also be engaged with the university even though they have already graduated. They get to go and watch the kids game. There’s just a good opportunity there for good collaboration.”

So just what is the eSports team, and how is it different from football or basketball? The eSports team is a team focused around playing video games, and the main muscle utilized is the player’s brain. There is even a professional league of eSports players who participate in contests for prize money. Kuro Takhasomi, the world’s highest-earning player, has earned over $4.1 million in his professional career to date.

“We host multiple teams that compete in different games on a collegiate level, sometimes at a national level,” said Justin Richard, captain of the Tech eSports Team. “We host about six to seven games right now. We have up to two teams in any given game. We have a total of about 85 to 90 competitive players right now. The club as a whole has just shy of 400 members, so it’s one of the biggest clubs on campus right now and it’s been a lot of fun.”

Although over 60 universities, such as Miami University and Western Kentucky University, have varsity teams, currently eSports is not considered part of the athletics department at Tech.

Scholarships are something that could be possible with the expansion of the team. There are no scholarships currently but it’s something they are talking to the university administration about.

The eSports Team welcomes those who would like to know more about gaming. The club has a viewing party scheduled for Nov. 10 from 9 a.m. to noon in Derryberry Auditorium to watch the League of Legends Worlds Finals. They also have competitions that are available to watch.

“We have an event at Tech in November called ‘TECH LAN’ on Nov 2-3, where we’ll have live competition with a bunch of different universities in the southeast region including ourselves,” said Richard. “Apart from that, most of the games are held online and there’s no live viewing. But we do have an event called the Team Showcase that we have every semester, where each of our team captains will come up and show a video, whether it’s a montage or they will do a speech with a presentation of some sort, on their team and their game they play to explain that game to people who don’t know the game or haven’t played it. It shows what their team has accomplished, what they are looking for in the future and talk to everybody who might be interested in playing.”

SAIC looks forward to working with the Tech eSports Team. They have provided all competitive gamers with team shirts that feature their gamer name and their real name. The uniforms have created a sense of pride and comradery within the team.

“Jerseys get expensive, especially for college students, but we want everybody to be uniform when we go to events and stuff like that,” Richard added. “We will go to competitions and live events and there are kids there in shorts and tee shirts, and it looks a whole lot more professional to be in at least a jersey so everyone on the team looks the same. This semester there has been a much better sense of team and family. Everybody is excited to get together and hang out with each other which is awesome. I love seeing that.”

The Tech eSports Team may not be as well known as the football and basketball teams, but they are quickly making a name for themselves in the gaming circuit.