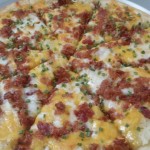 Allison Haney always wanted to run her own pizza joint – or at least ever since her high school days. This December, she fulfilled that dream with the debut of CG’s Pizza, where an ever-expanding menu features traditional staples along with some selections that are, as customers say, “a little weird.”

Best sellers include the “Hot Chick,” a pizza topped with ranch, buffalo sauce, grilled chicken, jalapenos and cheese, and the taco pizza, which comes with pizza sauce, meat, mozzarella, and after cooked, a layer of crushed tortilla chips, lettuce, shredded cheddar and tomatoes on top. Haney’s husband acts as pitmaster, and she says they can barely keep up with demand for wings, smoked butts and the shoulder they only sell on Fridays and Saturdays. The restaurant, located on South Grundy Quarles Highway in between Cookeville and Gainesboro, also serves up sandwiches, burgers, salads and desserts, highlighted by a homemade peanut butter pie.

“We do it the hard way,” she said. “Everything is scratch made.”

CG’s started small but turned a profit in its second month, “which is crazy for a restaurant,” Haney said. It’s certainly built up some loyal fans.

“It’s a very nice, family friendly restaurant and the food is always cooked to perfection,” one reader said. “The service is great, and it’s an all around great place to go have fun.”

This is Foglight Foodhouse’s seventh consecutive Ovation Award – the restaurant, 19 years old, has been a staple on the list since its inception. And if you’ve yet to visit, expect a hidden gem, tucked away on the confines of the Caney Fork River on the border of White and Van Buren counties, and eclectic menus and decorum.

Owner Edward Philpot says they’ve made some small tweaks in 2016 to bolster customer experience. The restaurant is expanding its available outdoor seating, boosting capacity by almost 20 percent. The busy summer season started earlier this year – he started noticing an uptick at the end of February versus mid-June – so he’s roughly doubled his staff. And he’s streamlined several processes – focusing on better internal systems, better food preparation, etc. – all of which Philpot says has had an impact.

“Because I have a larger kitchen staff, we can more evenly distribute the workload,” he said. “We’re really focusing on the dynamic between the front of the house and the back of the house. That’s just sped things up.”

And while the current menu combines the most popular selections from the last half- dozen menus combined, some lighter/fresher fares are possible this summer.

“We are really focusing on ‘business as usual,’ because things have been especially strong,” Philpot said. “We’ve been around forever, and our most effective exposure is word of mouth.”

The Butcher’s Block is another newcomer to the Upper Cumberland dining scene, but the steak and seafood eatery, located next to Stonehaus Winery in Crossville, has certainly risen in the ranks.

The restaurant’s owners say that’s because dishes are carefully prepared and presented. Table linens help give
the casual fine diner a boost. Meats are all hand-cut in house, and most everything is prepared on site. The
crab cakes, smoked salmon and stuffed portabellas are popular pre-course options, and the lobster bisque – made from scratch – is sometimes sold by the gallon.

In just 17 months in business, Butcher’s Block has cracked TripAdvisor’s list of top five restaurants in Crossville. Not bad for a start-up. And leadership is hopeful their interstate proximity – along with future development potential on Genesis Road – will pay off in the long haul.

The pub has started a “dinner with chef” event twice a month, where patrons – up to 16 – are treated to a six-course menu prepared exclusively by the pub’s Chef Barry O’Connor. Bull & Thistle will also soon launch a mystery dinner theater in July. Both are reservation only.

“Folks come to the restaurant for different reasons,” owner Diana Mandli said. “Some because they’re out-and-out foodies, and they come for the culinary excellence. Some people just love historic buildings, and they love historic renovations and want to see what we’ve done inside the pub. But then there’s this whole other world of diners who are seeking entertainment or an experience that’s different from anything else in the area. So we’re trying to build this into a place that appeals to even more folks.”

But, of course, the food still steals the show. Mandli said they recently rolled out a new dinner menu, and a new lunch menu will debut this month. Popular orders, like the filet, which is pan-seared and rolled in peppercorn, rock salt and herb sauce, and the porterhouse, which weights in at 22 ounces, however, will always remain fan favorites.

“Some of the pub staples that people also expect, like the fish and chips,” she said, “that’s not going to go anywhere.”

Center Hill is a seasonal summer destination for many, but the smells of good eats coming from Blue Water Grille, anchored at Hurricane Marina, seem to be bringing in visitors in its own right. Executive Chef Stephanie Falk heads up one of the region’s more unique dining arenas, and menu items like BBQ shrimp and grits, fish tacos and black angus steak prove it’s got more to offer than just lake food.

Blue Water Grille is open Wednesday-Sunday (the weekend menu also includes breakfast). In 2009, Nashville Lifestyles Magazine raved that it was “our absolute favorite waterfront restaurant in the area.”

Location may be the big adage in the real estate business, but for a restaurant like The Back Room Bistro, it’s been both a blessing and a curse.

Tucked away inside a Broad Street facing West Side building, the Bistro is admittedly a hidden gem. But that’s slowly become part of its allure, says owner Rodney Laulo.

“We are really hidden where we’re at, and that’s been a bit of a challenge in building up the business, but it’s now becoming an attraction,” he said. “I think people really enjoy that it’s this little niche place that they know about that maybe somebody else doesn’t. It’s that best-kept secret in Cookeville. They like to bring someone else in and let them experience something that they’ve found. There’s something about that that’s pretty special.”

Back Room Bistro prides itself on its service, too. Coupled with a “make your own drink bar” and food – some of which comes fresh from the Cookeville Downtown Green Market — the restaurant has seen slow and steady growth over its last four years. An organic, grass-fed burger tops the menu (it’s the special on Mondays and Fridays), while tacos and well-known salads are also solid selections.

“We’re just a mom-and-pop place,” Laulo said. “People know they’re going to get great food. They know that we’re a family organization, we care about them, and we make those connections. And it makes people want to come back. That’s the main thing. We always want to make sure we put out our best.”