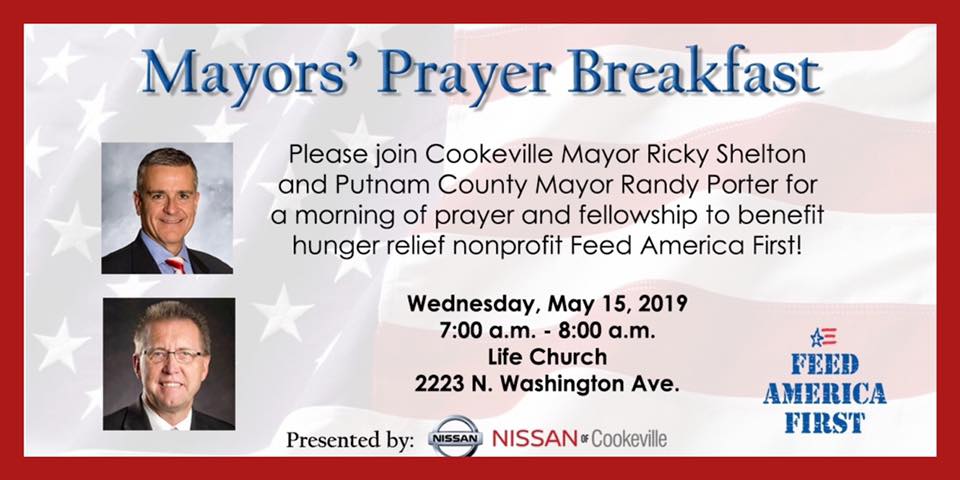 COOKEVILLE – Cookeville Mayor Rick Shelton and Putnam County Mayor Randy Porter have joined together with Feed America First in an effort to open a food bank in Cookeville. Their efforts have culminated in a Mayor’s Prayer Breakfast designed to educate the public on Feed America First and to give the public an opportunity to contribution to the effort if so moved.

“Mayor Porter and I have been wanting to do this for a while,” said Shelton. “We’re calling it the Mayor’s Prayer Breakfast. He (Porter) and I are the hosts. We will be meeting at Life Church at 7 a.m. on Wednesday morning (May 15) and it will last one hour, from 7 – 8 a.m.”

“We will have a keynote speaker, Lt. Gov. Randy McNally,” said Shelton. “We’re also wanting to raise awareness and raise some funds for Feed America First. They have a food bank/food distribution in Murfreesboro and their executive director (Mike Womack) lives here.”

Although based in Murfreesboro, Feed America First has already reached out to residents of the Upper Cumberland. On April 20 the organization, with some local assistance, brought a trailer to the Putnam County Fairgrounds and was able to provide 540 families (over 2,100 individuals) with food.

“We’ve been in conversations and they want to open a food bank here in Cookeville to serve Putnam County and the whole Upper Cumberland region,” Shelton added. “We’re going to have a message from them that morning too to share what that’s about and what that could mean for our entire region.”

The event is being held at Life Church, 2223 N. Washington Ave., Cookeville. The doors open at 6:30. A Chick-fil-A breakfast will be provided with coffee from BROAST.

The event is free but donations to Feed America First will be accepted.