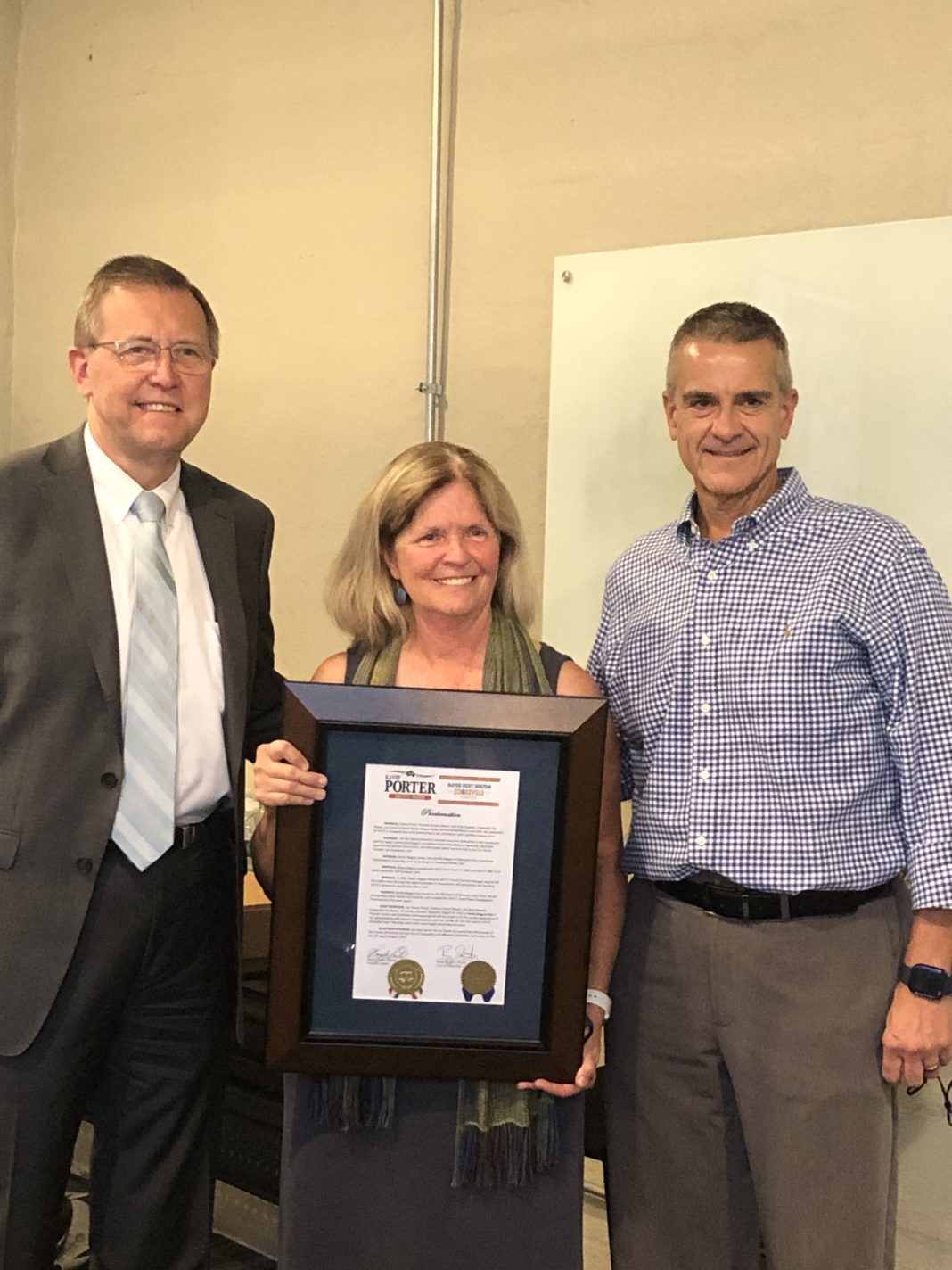 COOKEVILLE – Community members joined WCTE PBS in celebrating Becky Magura’s 40+ years of service to the Upper Cumberland and Middle Tennessee during an appreciation event on Friday, Aug. 20. at the WCTE offices located at 229 E. Broad Street.

The event was the capstone of several events honoring Magura, including the proclamation by Putnam County Mayor Randy Porter and Cookeville Mayor Ricky Shelton of Aug. 19 as Becky Magura Day in Putnam County and the city of Cookeville.

In honor of Magura’s retirement and the many years she dedicated to the Upper Cumberland, WCTE held a Day of Support with donated funds going to the WCTE Education Endowment fund. The Day of Support has raised $34,000 to date.

Magura started her career at WCTE as an intern in 1980 and worked as an audio technician and producer before becoming the station’s fourth General Manager/CEO in 2006.

During her career with WCTE, Magura has been called upon to serve in many capacities both locally and nationally.  She has held positions on several boards including two terms on the PBS Board where she served as Chair of the PBS Interconnection Committee and on the PBS Station Services, Interconnection and Strategic Planning committees. She has also contributed to the NETA Board of Directors where she held a chair position.

Magura has hosted national pledge efforts, pitched future television broadcasting technologies, and interviewed numerous guests on her show One on One with Becky Magura.  Magura was named the new President and CEO of Nashville Public Television in July but will leave a legacy of public media in the Upper Cumberland that inspires collaboration, vision, and connection.

The full wording of the Proclamation for Becky Magura Day is as follows:

WHEREAS, Randy Porter, Putnam County Mayor, and Ricky Shelton, Cookeville City Mayor, are proud to honor Becky Magura today for her extraordinary work ethic and dedication at WCTE in changing lives and contributing to our community with a positive impact; and

WHEREAS,  she has demonstrated in countless ways her dedication to this community and the Upper Cumberland Region, providing trusted educational programing, important regional and national information, and vital public safety services such as the Ice Storms Tornado, and Pandemic; and

WHEREAS, Becky Magura holds a BS and MA Degree in Education from Tennessee Technological University, with an emphasis in Communications; and

WHEREAS, Becky Magura started with WCTE as an intern in 1980 and then in 1982 as an audio technician and producer; and

WHEREAS, in 2006, Becky Magura became WCTE’s fourth General Manager and has led the station team through the digital transition in transmission and production, and securing WCTE’s downtown studio and offices; and

WHEREAS, Becky Magura has served on the PBS Board of Directors since 2014, served on countless other boards and councils, and received the 2021 C. Scott Elliott Development Professional of the Year award.

NOW THEREFORE, we, Randy Porter, Putnam County Mayor, and Ricky Shelton, Cookeville City Mayor, do hereby proclaim Thursday, August 19, 2021 as Becky Magura Day in Putnam County and Cookeville and encourage all citizens to join us in this worthy observance of her achievements with sincere congratulations and best wishes for her new role as CEO of Nashville Public Television with many more happy and productive years.

IN WITNESS WHEREOF, we have hereto set our hands and caused the official seals of the County of Putnam and the City of Cookeville to be affixed at Cookeville, Tennessee, on this the 19th day of August, 2021.