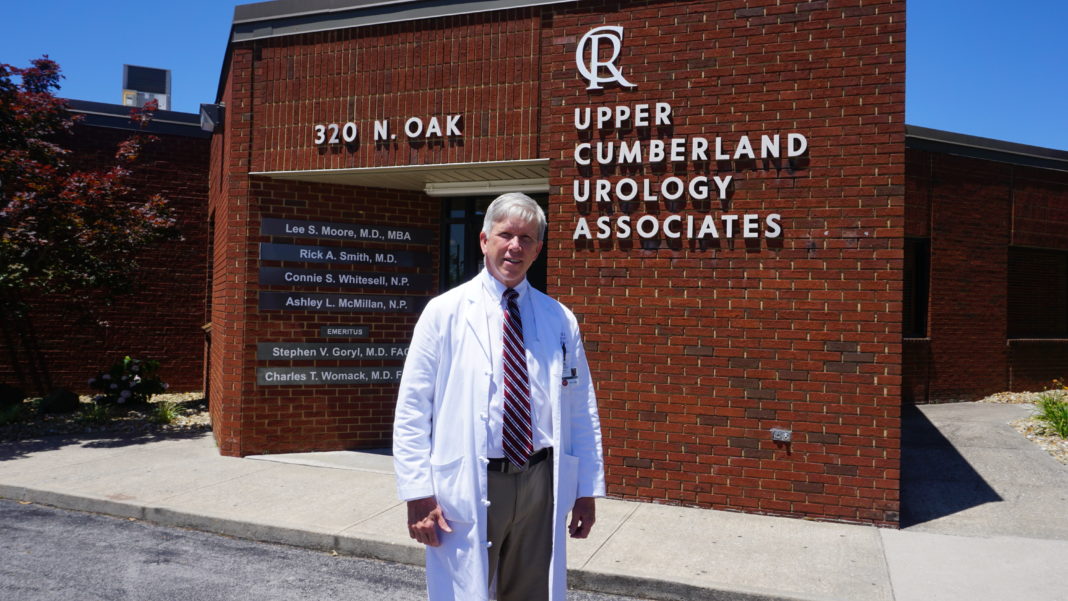 “I’m a third generation physician in my family,” he said.

He is also a third generation physician who has had an impact in CRMC’s growth over the century.

His father, J.T. “Jack” Moore Jr., was one of the first members of medical staff at then-Cookeville General Hospital. His grandfather, Dr. J.T. Moore Sr., known affectionately around town as Dr. Tom, had a well-established medical practice in Algood that he opened in 1899.

Between the two of them, they treated thousands of patients in the area in a different era of healthcare. His grandfather conducted house calls and rode all over the region on horseback. His father was one of the first 10 physicians to join the hospital medical staff and delivered his last baby April 16, 1991, before passing away in 1999.

Lee joined the urology practice in 1989 and has been here ever since, seeing the hospital grow, through many boards and administrators.

“It’s nice to know that the administration and board are behind us (physicians),” he said. “Whether it’s Cookeville, Nashville, Chattanooga or Knoxville, we have to have the technology and the willingness to acquire the equipment that is needed to be able to attract surgeons here.”

That type of support is ultimately the factor that helps patients and that kind of attitude is what a lot of recruits are looking at.

“Everything made at Cookeville Regional goes back into it,” he said. “None of the profits go to shareholders. It goes to the citizens of Cookeville and the surrounding areas in the form of growth.”

Just in the last 25 years, the hospital has grown tremendously, not only in the number of employees, but the services offered.

Jeff, Lee’s Nephew and the son of Jim Moore, is the fourth generation physician to join CRMC’s ranks. He is a general surgeon who joined the staff in 2008, working with Drs. Scott Copeland, Brian Gernt and Jeff McCarter at Middle Tennessee Surgical Specialists.

“The Moore family has had a great impact on the healthcare of the region and how this hospital has grown over the past century,” said Paul Korth, CRMC CEO. “I’ve seen this area and our facility grow to well over 2,400 employees on staff. And that growth is due to the physicians, the board and every single employee supporting this operation. It takes a team to run this facility as efficiently as it is.”

CRMC has no corporate or taxpayer backing, as it is a stand-alone, financially secure operation, which is unique for a rural hospital of its size.

The profits generated at CRMC are 100% reinvested in the medical center through technological advancements, operations and hiring of the best staff, including physicians, nurses and other team members. Without that reinvestment, CRMC is not a relevant, competitive or profitable facility.

CRMC’s presence also attracts industry to the area and is a large factor in new companies and jobs locating here.

Cookeville Regional Medical Center is celebrating 100 years in 2021. It began as a 15-bed private clinic built by a local surgeon and has grown to a 269 bed Regional Center on a 55-acre campus featuring state-of-the-art Cardiac care, Orthopedic care, Cancer Center, Robotic surgery and much more.