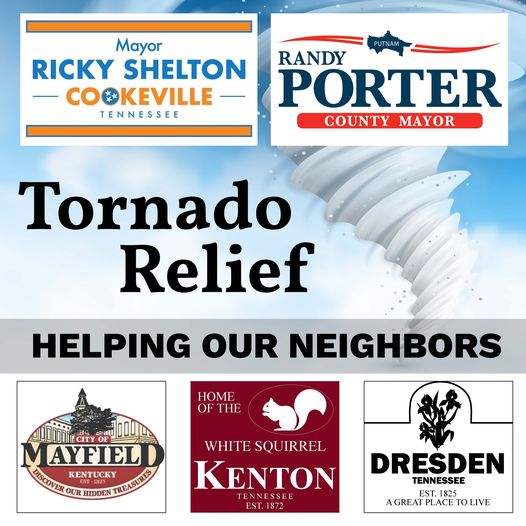 COOKEVILLE – During Thursday evening’s city council meeting, Cookeville Mayor Ricky Shelton announced that earlier in the day he and Putnam County Mayor Randy Porter had participated in a Zoom call with Mayor Kathy Onan of Mayfield, Ky.; Mayor Jeff Washburn of Dresden, Tenn.; and Mayor Danny Jowers of Kenton, Tenn., notifying them that they would be mailing checks to them in the total of $240,000. The money was collected as part of our Tornado Relief Fund and designated for them.

The timing of the call was made to coincide with the second anniversary of the EF-4 tornado that forever changed Putnam County. Shelton and Porter said in a statement that they wanted to do something positive in honor of the victims, survivors, volunteers, and responders that were affected by our tragedy.

After the early December tornados ravaged the Dresden, Kenton and Mayfield areas, Shelton and Porter re-activated the tornado relief fund on Dec. 13 and announced that donations would be received to help others whose communities suffered a similar tragedy like ours did two years ago.

“Today, we are honored and humbled, due to your generosity, to announce that we are sending $240,000 that was collected the past 2 months to the Mayors of Mayfield, Ky., Dresden, Tenn. and Kenton, Tenn.,” said Shelton. “100% of the funds will go directly to the victims and survivor’s families just like we did here in our community. Our heartfelt thanks to each of you that donated to the fund, as well as our tornado relief committee that helped facilitate the disbursement. This proves once again what a great community we live in! May God bless each of you.”

A recording of the Zoom call can be seen at