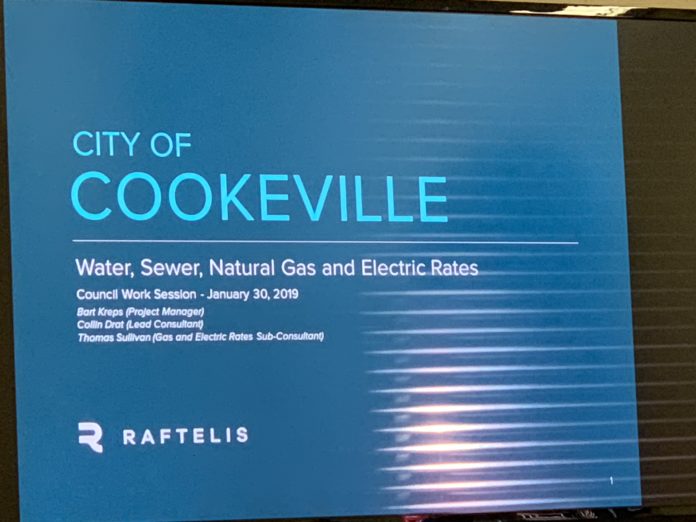 Utility consultants presented their findings to the councilmen and city officials at a work session held at the Cookeville Gas Department.

Warmer winters, planned capital projects and the nationwide trend in declining consumption are all factors that have a direct impact on utility revenue. Consultant’s advised that the city’s current rate structure needs to be adjusted to reflect these factors.

Water and sewer rates are most affected by planned capital improvement projects (CIP). These CIPs are projects that are necessary infrastructure needs. These include a water plant expansion, a sewer plant rehabilitation, the Capshaw sewer rehab, the Double Springs customer acquisition and routine water and sewer rehabs.

Other projects, such as the proposed widening of South Jefferson from I-40 to Highway 111, also have utility costs that must be passed along to all customers.  TDOT is requiring the city to contribute $1 million for relocating the utilities for this project due in the next fiscal year.

Consultants suggested rate adjustments that included slight increases from year to year through the 2023 fiscal year.

For water customers, the average customer who uses 5,000 gallons of water per month would see their bill increase slightly each year, rising from $20.40 to $29.14 per month over the six-year period.

Sewer customers would see a slightly larger increase due to the increasing costs of treating wastewater. The customer using 5,000 gallons would see an increase from $28.05 to $40.89 per month over six years.

Consultants suggested that the current gas rate structure be adjusted to a more “revenue neutral” structure that would increase the stability of gas revenues.

The changes that the consultants suggested involve changing the volume rates that gas customers pay. The end result for a typical user would be less than a $2 increase in the summer months with an over $3 decrease during the winter months.

The gas department, under the current rate structure, has actually lost money for the past two years because of the mild winter weather. This change would help balance revenues and make them less dependent on winter temperatures.

The current electric utility cost structure is very similar to the gas departments rate structure. Increasing the fixed volume cost and lowering the variable cost for higher volumes of consumption was suggested to make this rate structure revenue neutral also.

These proposed rate structure changes were presented to the council members for their evaluation.  No rate changes will go into effect until they are discussed and voted on in a formal council meeting.  Officials have indicated that a decision on these changes could be made this spring or summer.