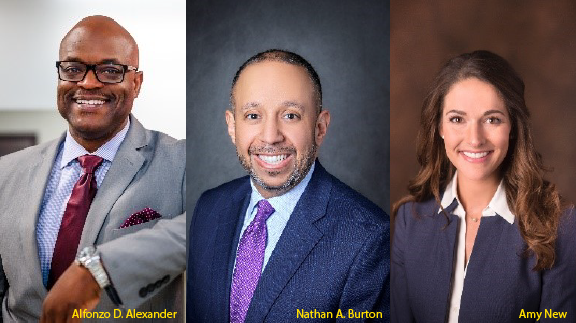 “The Foundation Board is comprised of distinguished Tech alumni and friends who have shown a continued interest in the university and the advancement of higher education,” said Kevin Braswell, Vice President for University Advancement and Executive Director and Secretary of the Foundation Board of Directors. “All three new board members are deeply committed to the university’s success and are illustrative of the quality education Tech provides.”

Alfonzo Alexander graduated from Tech in 1991 with a degree in business management with an emphasis in human resource management. He also earned an MBA from Lipscomb University and completed an Executive Leadership Program at the Wharton School of the University of Pennsylvania.

Alexander is the chief ethics and diversity officer for the National Association of State Boards of Accountancy and president of NASBA’s Center for the Public Trust. As chief ethics and diversity officer, he oversees strategic diversity initiatives and ethics compliance for the organization. Alexander has served as president of CPT since 2012, and under his leadership, the CPT has cultivated new partnerships and built programs on nearly 100 colleges and university campuses across the United States. Alexander also leads the Alexander Success Group, Inc. where he and his team provide leadership and strategic business consulting and training services.

“I’ve been fortunate to accomplish certain things in life, and the development of my leadership skills really began when I was at Tennessee Tech,” said Alexander. “I had experiences that created opportunities for me to become the person that I am today. I see the Foundation Board as a vehicle for me to help young African American men and other members of the student body develop the skills that I gained during my time at Tech.”

A former Golden Eagle football player, Alexander has pledged his support for the Football Operations Center and helps champion fundraising efforts for the facility.

“I’m excited to see that Tech has been able to garner the support needed to embark on some new capital projects on campus,” he said. “This will help pave the way for the university to attract talented students.”

Nathan Burton graduated from Tech in 1993 with a degree in business management with a concentration in management information systems and earned an MBA from Lipscomb University.

Burton is the director of business applications support for Pinnacle Financial Partners. Prior to his employment with Pinnacle, he served as the senior project manager and director of business services for the Tennessee Secretary of State. He also spent five years with First American National Bank and laid the groundwork as a fiscal analyst for the Tennessee General Assembly’s Fiscal Review Committee.

“Throughout my time as a student at Tennessee Tech, as well as in my career, I have been the beneficiary of the education, network and opportunities provided to me through Tech,” said Burton. “It is a pleasure to serve on the Foundation Board in order to give back and help the university fulfill its mission while helping students reach their full potential.”

Amy New graduated from Tech in 2008 with a degree in marketing, received a master’s degree in leadership and public services from Lipscomb University and was awarded the Tennessee Certified Economic Developer certification.

New previously served as the director of programs in the Government and Community Affairs Office at Vanderbilt University Medical Center, and she spent nearly a decade in state government including a four-year appointment as the first-ever assistant commissioner of rural and community development for the state of Tennessee. Within the Upper Cumberland, she has worked for MMA Creative, the Upper Cumberland Business Journal and WCTE, as well as in the Putnam County Executive’s office.

“Tennessee Tech is the Upper Cumberland’s largest asset, by far,” said New. “If Tech does well, the entire region does well. I look forward to increasing industry connections, and I want to show how much corporate connections mean to the university and future Tech graduates. The growth that’s happening at Tech is growth for our entire state.”

New says she hopes to encourage young alumni to give back to their alma mater.

“You don’t have to be affluent to give back to a place that means something to you,” she said. “Professionally, I feel that it’s really important for the Chamber and Highlands Economic Partnership to serve in this capacity for my alma mater. On a personal level, it’s important to give back to the university that helped build the person I am.”

Braswell says he is excited about the leadership and energy Alexander, Burton and New bring to the board.

“We are honored that these exceptional individuals have agreed to lend their time and knowledge to Tennessee Tech,” he said. “Each is knowledgeable in her or his industry and brings a unique, meaningful perspective to the board. I am confident their expertise will lead to exciting new initiatives for the university.” 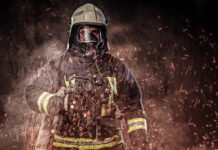 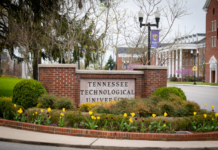