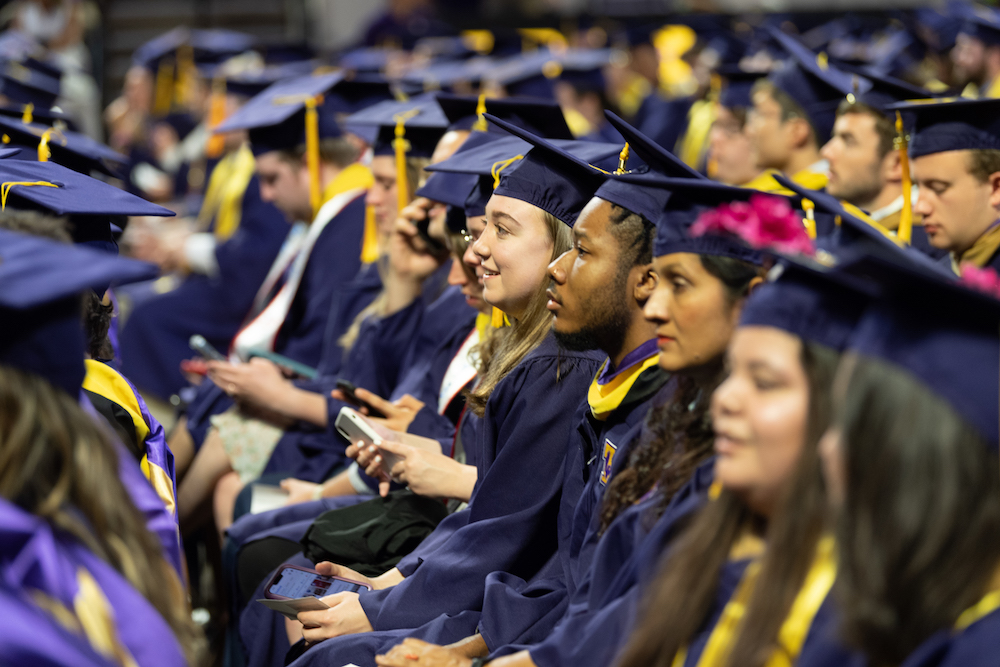 More than 865 degrees are expected to be awarded

Cookeville – Tennessee Tech University will celebrate its fall commencement ceremonies on Friday, Dec. 9, in the Hooper Eblen Center. The morning ceremony, which starts at 9 a.m., will include the following colleges and schools: graduate studies, arts and sciences, engineering, fine arts and the Whitson-Hester School of Nursing.

The afternoon ceremony, which starts at 1 p.m., will include the following colleges: graduate studies, agriculture and human ecology, business, education and interdisciplinary studies. More than 865 degrees are expected to be awarded to women and men who came to Tech from 72 counties throughout Tennessee, 18 states and 20 other countries. Those earning undergraduate degrees represent 39 fields of study, and those receiving graduate degrees represent 30 fields of study.

The birth dates of students from the class of 2022 range from 1957 to 2003, evidence that an education at Tech can be for everyone, regardless of age.

“Tech’s graduation rates have hit a new high, with the six-year rate hitting 60.2% for students who started in fall 2016,” noted Tech President Phil Oldham in October. “This bested last year’s record of 59.9% and demonstrates a continued dedication to graduating students on time.”

Retired Dean of the Angelo and Jennette Volpe Library and Learning Assistance Doug Bates will serve as the official macebearer for both ceremonies. Bates recently retired from the university this past fall with 12 years of service. Bates had previously served as the university librarian at Brigham Young University-Hawaii and chair of access services at Hale Library at Kansas State University. He received his bachelor’s and master’s of library and information science at Brigham Young University and his Ed.D. in educational administration from Kansas State University.

The university will posthumously award a bachelor of science degree in interdisciplinary studies to Michael Wesley Flatt during the afternoon ceremony. Flatt passed away in 2019 at the age of 70 and had earned more than 200 college credit hours, but never completed a degree. He was a graduate of the class of 1966 from Central High School and served in the military. He did two tours in Vietnam with the U.S. Army. He received a purple heart and a bronze star. Flatt’s son William Wesley Flatt will accept the degree on behalf of the family.

Tech alum David Johnson says in his remarks, “I was once in your seat, earning both my civil engineering and mechanical engineering degrees as a Golden Eagle myself. While I sat in your seat, this class walked through a little bit of a different journey. You began your college experience as normal. Well, then bam, a global pandemic hit. Your college years may be marked with different memories of quarantines, virtual classes, masks – you name it. But, despite those factors, I’m certain of one thing. You have received one of the finest educations in the country.

“That speaks volumes of your resilience, ambition and talent,” continued Johnson. “Wherever you land, you will find the key to success is working well within a team and placing your value on people. Success will be measured by the performance of a team and your collective output, and you just thought you were done with those group projects. But jokes aside, I am confident that Tech has prepared you well to solve any challenges you and your teams will face.”

Tech will also recognize four students who will be commissioned to serve in the armed forces as second lieutenants: Joshua I. George, Silas G. Lamb, Jacob R. Nelson and Alexander J. Verdi. Nelson is also honored as a distinguished military graduate.

To watch the livestream of the commencement ceremonies, visit tntech.edu/commencement.