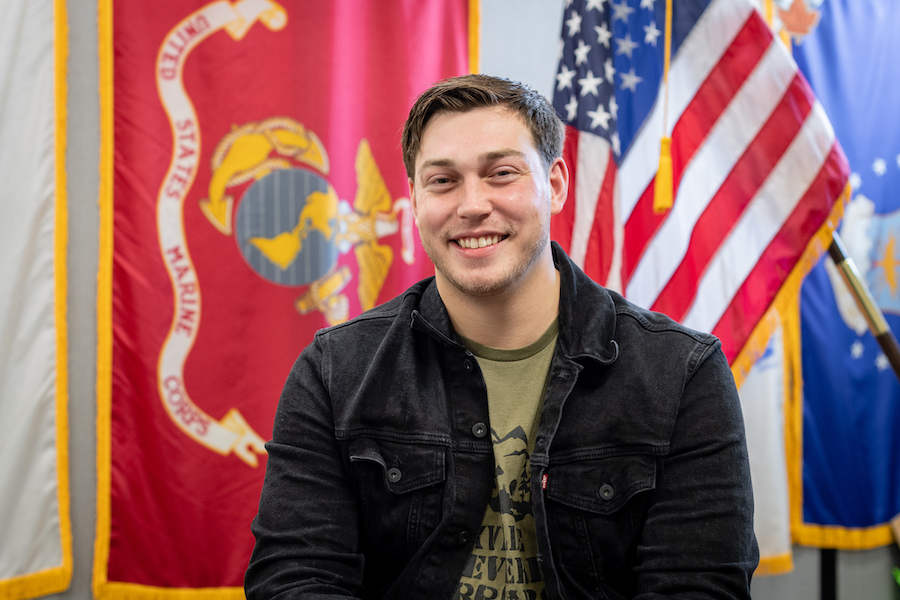 COOKEVILLE – When Benjamin Iles graduated from high school in Wilson County, he decided to follow his family’s footsteps and serve his country in the United States Marine Corps instead of going to college. Six years later, Iles has the opportunity to pursue a college degree.

Iles is a freshman at Tennessee Tech, majoring in wildlife and fisheries in hopes of becoming a park ranger one day.

“Tech was familiar to me because my sister went here, and I knew that they had a good wildlife program that would help me pursue a different career,” he said.

Iles is one of the many veterans on Tech’s campus who will be honored during a Veterans Day ceremony on Thursday at 11 a.m. in front of the Jere Whitson Building. Sponsored by the Office of Military and Veterans Affairs, the ceremony will be a part of a week of events which include Veteran appreciation day on Monday, a student veteran organization versus ROTC kickball tournament on Tuesday, celebration of the Marine Corps 245 birthday on Wednesday and a R.E.D out day on Friday.

Iles spent his active duty in the Marines as a sergeant assigned to be an Embassy Guard for three years. Where he was stationed in Austria, Myanmar and Zimbabwe.

“It was a very eye-opening experience,” Iles continued. “I had the opportunity to travel a lot and experience different cultures that are very different from the United States.”

After active duty, Iles began preparing for life after the military, he was accepted to Tech and immediately started corresponding with Tech’s Military and Veteran Affairs Office on how he could get connected.

“The office was very helpful, and they had everything in a concise format for me. They helped me be set up for success and not mess anything up.”

Setting veterans up for success is what Mary McCaskey, Director of Financial Aid and Veterans Affairs and her staff do on a regular basis.

“The success of our student veterans is important to me because they have sacrificed so much and were willing to do the job that so few Americans choose,” McCaskey said. “To give them a sense of comfort and advocacy as they begin this new chapter in their lives helps ease their mind and provides a solid foundation and connection knowing they have someone in their corner truly wanting to help them succeed.”

Iles said that making the transition from military life to college life was difficult at first after having been out of school for a while. He said that the military has helped him have the self-discipline he needs to be successful in college. He encourages other veterans to pursue a college degree at Tech after leaving the military.

“I definitely recommend coming to Tech because it is small enough to where you feel very close to everything, and it is a place that has helped me make the transition to this next stage of life,” Iles said.

For more information on the Veterans Day ceremony and activities during Veterans Week, go tohttps://www.tntech.edu/veterans/veterans-week.php.

For more information about Tech’s military and veteran affairs office, go to https://www.tntech.edu/veterans/index.php.