While the measure still requires approval by the Cookeville city council, the city’s planning commission weighed in on the rezoning request during it’s regular monthly meeting Monday evening.

With only two members casting a “no” vote, the majority of commission members voted in favor of rezoning the 11-acre property eyed for the proposed development – located on W. 9th Street and N. Franklin Avenue – from RS10 single-family residential to planned residential development (PRD) – a level of zoning that would strictly limit the development to remain almost identical to the plans presented to the commission for review a month ago and approved during the meeting. 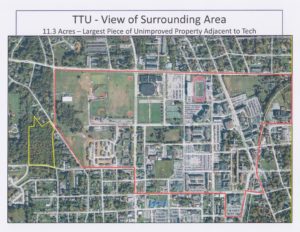 Commission chair Jim Stafne told the standing-room-only audience that the commission hadn’t approved a PRD request in the 19 years he’s served on the commission. However, Monday night’s decision broke that streak, much to the dismay of several residents of the Mount Vernon community in attendance; many of whom were on-hand to voice their opposition of the student-focused development.

The commission listened to nearly two dozen comments, mostly from residents in opposition of rezoning the property. Residents cited concerns of potential increases in traffic and crime and fear of decreased property values.

“This may be a good thing but we don’t want it,” said Jerry McCulley, who owns six acres that join the proposed project site.

The development, known as The Aerie, is designed specifically with the students of Tennessee Tech in mind and is designed to be “complimentary to TTU’s current and future student housing,” the project proposal says. However, the project is not sponsored or funded by the university.

“We went directly to Tennessee Tech who also confirmed for us that the need was there,” Wayne Cravens, a member of the Titan Development team, told members of the audience and the commission. “They have supported this proposal with letters from the university president and the athletic director.

“We have tried to be thoughtful in the way we designed this,” Cravens added. “As Mr. (James) Mills noted, PRD has a higher density. We actually started at 205 (units), I believe, and then after further review on how the topography of the land laid, we felt like we could reduce the number and still make it economically feasible while preserving the entirety of the wetland and much more green space. In fact, almost half of the property is preserved as green space.”

Some members of the audience spoke in favor of the development, noting such a residential development could help the university attract more students and remain competitive among other universities.

“If Tennessee Tech is going to continue to move to the forefront as a school the Browns, the Prescotts, and the Derryberrys developed when I was in school here in the sixties, I think this is an opportunity for you to provide something for the students that attracts them and gives the parents something to think about when their kid comes to school here,” said Phil Wilbourn.

Amid the recent boom of new multi-family residential construction in the city, this student-focused residential facility brushes the western fringe of Tennessee Tech’s campus – prime real estate for those looking to appeal to those university students searching for nearby off-campus housing.

The concept of all-inclusive, student-focused housing isn’t new to Cookeville. Another well-known community-style, premier residential facility is about two miles – or a six-minute car trip – away from the heart of Tech’s campus, according to Google Maps. Conversely, The Aerie would be a little closer; about a three-minute car trip or 0.8 miles away.

Many of the Mount Vernon residents who spoke out against the proposed development at Monday night’s meeting cited concerns of increased traffic – a problem they say they are already experiencing; especially when trying to exit from 9th Street onto Willow Avenue.

“My primary concern is the traffic,” said Michael Dwyer, a Mount Vernon resident for approximately four years. “We already know how the traffic is trying to get out of 9th Street onto Willow (Avenue). You can’t even make a left-hand turn. I think we really need to consider that. I’m all pro-growth and pro-community but what about the roadways that have to support this type of development.”

A third-party traffic study conducted by J.M. Teague Engineering & Planning indicated that any additional traffic associated with the proposed development “will have minimal impact on the surrounding roadway network” adding the city should consider an assessment of their multi-modal  – think bicycling and walking – accommodations and make improvements as necessary.

Instead of being rented per unit, space would be leased by the bed and would be fully furnished, each with it’s own private bath and walk-in closet, and rent would be all-inclusive – with all related utilities and services bundled in the rent amount.

In a letter provided to the commission, Cumby and Cravens explain the site’s natural topography will provide screening against nuisances such as sounds and light.

“In addition, we have designed our site to incorporate a large retaining wall barrier with planting on top on the western side by lowering the parking and buildings by as much as 12 feet,” the letter explains. “Not only will this block all view of cars, it will also block the entire first floor of our three-story building.”

Designed to further reduce sound pollution, interior courtyards have been lowered an additional 11 feet and are surrounded by four-story buildings.

According to the developers, The Aerie “should help with on-campus parking deficiencies and help to promote utilization of (the) new west campus parking.”

With site access limited at two gate-controlled entries and a facility that will be staffed 24/7, developers tout The Aerie will offer a controlled and secure environment, not only for residents of The Aerie community but for the surrounding neighborhood as well.

According to Cravens, the university is in favor of the potential development and the development team has been advised Tennessee Tech will provide written support for the proposed project.

At Tech Village, there are 227 apartments with an occupancy rate of 98.7 percent at the time of the September report – 356 students were listed in those units. At that time, there were three apartments that were not rented, but those have since been filled.

There are currently just over 10,500 students enrolled at the university this semester and university policy requires all freshmen students – a class comprised of more than 1,775 students this semester – to live in student housing.

The UCBJ reached out to the university for comments but had not received an official comment by deadline.

Clarification: According to Cookeville planning director James Mills, the planning commission has approved planned residential developments in the past. However, he noted, for various reasons none of those previously approved developments have ever been completed.