RHEA COUNTY – Part of a state industrial access road connecting Cumberland and Rhea counties has been closed until further notice following a treacherous mud and rockslide earlier this week. Roughly half of the roadway, approximately one lane, along State Route 68, between Hwy. 127 in Crossville and Hwy. 27 in Spring City, broke away and slid down the mountainside Tuesday.

Heavy, persistent rains are suspected of causing the slide and resulting roadway closure, which will impact an estimated 3,600 daily drivers of Wassom Memorial Highway; specifically the segment of roadway between Firetower Road and Gilliam Road in Rhea County.

According to Jennifer Flynn, regional communications coordinator for the Tennessee Department of Transportation, SR-68 is not stable at this time and both eastbound and westbound lanes are closed to traffic.

“It continues to move,” she told the UCBJ. “We are working on a repair plan but don’t have it in place yet.”

With the roadway and surrounding soil still unstable, TDOT engineers are unable to conduct a thorough study of the site and create a plan of action at this time.

The TDOT SmartWay app lists a target completion date for repairs of May 31. However, Flynn points out that date is simply an estimate.

“The slope is still moving so we can’t get our people beneath it until it stops,” she said. “We are mobilizing equipment so we can be ready but we can’t do anything yet.” 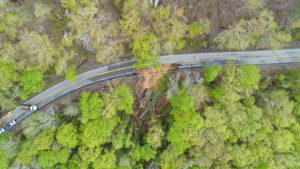 The situation took an even more dangerous turn Tuesday as crews were forced to run for cover as a large crack on the other side of the roadway opened up.

“They were on site checking out the large crack that eventually opened up,” Flynn said. “They heard trees popping and they ran. The big takeaway here is that no one was hurt. We can replace a road but not our people.”

Traffic is being diverted to alternate routes as engineering crews await a safe opportunity to survey the damage. The area is one that TDOT has kept a close watch on, Flynn says.

“We were, are, and will be aware of the potential for roadway settlement in this area,” she said. “It is the nature of mountain roads. We have done several soil nailing projects along that stretch of roadway, but not one in this particular place.”

While rare, slide events are still occur throughout the Upper Cumberland and the state. In recent years, Polk County experienced a small rockslide. Grundy County had a large sinkhole suddenly open up in the road, nearly swallowing vehicles, Flynn said.