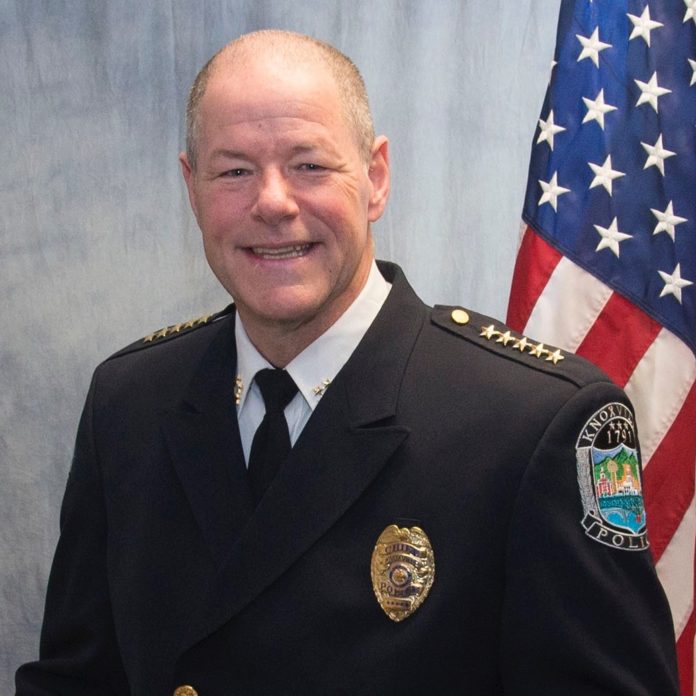 NASHVILLE – Tennessee Gov. Bill Haslam today announced the appointment of David B. Rausch as director of the Tennessee Bureau of Investigation (TBI).

Rausch, 55, has served as chief of police for the Knoxville Police Department (KPD) since 2011, overseeing an agency of more than 500 employees, including some 400 sworn police officers. Rausch joined the KPD in 1993 and rose through the ranks, serving in several different roles, including as deputy chief and a member of the special operations squad. Throughout his 25 years with the KPD, Rausch has focused on community policing and building relationships with local, state and federal agencies.

“David brings a wealth of experience to the TBI and the proven leadership to continue the great progress the agency has made in making Tennessee safer. As police chief in Knoxville, he took on both urban and rural public safety issues and collaborated with local, state and federal partners to help address some of the region’s most pressing crimes, such as gang activity and human trafficking,” Haslam said.

“I am honored and humbled the governor has selected me for this position. The TBI is an excellent organization with amazing employees dedicated to serving the great state of Tennessee. I look forward to working alongside them to lead the agency into the next chapter and am excited to bring my vision and energy to serve in this capacity,” Rausch said.

Rausch is a veteran of the U.S. Army, serving in the Military Police Corps from 1986-1990. He earned a master of science degree in justice administration and a bachelor of arts degree in political science from the University of Louisville. Rausch will become director effective Monday, June 25, 2018.

The announcement came on the heels of reports accusing acting agency director Jason Locke of misconduct. Locke, TBI’s deputy director since 2016 has logged more than two decades with the agency and has been serving as acting director for approximately one month; following the retirement of longtime TBI Director Mark Gwyn. Locke, Rausch and former Bradley County Sheriff Tim Gobble were among the top three candidates vying for the TBI’s top spot.