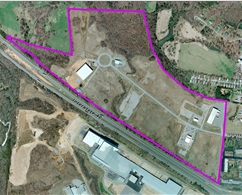 NASHVILLE –The Tennessee Department of Economic and Community Development announced yesterday that three new sites had received the state’s highest designation of being prepared to accommodate an industrial project. The 20-acre pad-site in the Interchange Business Park is one of those and is now a “Select Tennessee Certified Site.”

All of Interchange Business Park was reviewed back in 2015/2016 as a part of the Select Tennessee Property Evaluation Program – a mandatory first-step in applying for the designation as a Select Certified Site. This application was prepared at the chamber and awarded at no cost to the city. Then in April 2017, the city’s successful application for a Site Development Grant brought the community the $500,000 grant to commence the prep work on the 20-acre site in the park. The city committed $250,000 to complete an industrial pad which was matched by Cumberland County government (another $250,000).  That project is wrapping up this month.

“This is a great example of how working together can benefit our area,” commented Cumberland County Mayor Allen Foster. “When Cumberland County, the city of Crossville and the chamber cooperate, our community prospers.  This is a result of years of work and is a step toward bringing in more good jobs to Cumberland County.”

“This announcement is not the end of the Interchange Business Park’s story, but is only the beginning,” said James Mayberry, mayor of Crossville. Until there is a business (maybe two) that occupies this 20-acre site, this remains an option to help us to attract new industry to our community. Now we must market the pad to a company looking to employ at least 100 individuals at competitive wages.”

Now the work begins to use the site as a tool to attract a new company to Crossville.  The city, on recommendation from the Cumberland County Joint Economic and Community Development Board, has set some basic standards on what project can land there.  Those standards require a minimum of 100 new jobs that pay at least 10 percent more than the local manufacturing median wage which is currently $12.79 per hour.  The purchase price of the land will be up to $100,000 per acre on the site. In the past the city has offered offsets to the purchase of city-owed land that would bring the price down, but the new company must meet these minimum jobs/wage targets.

“Some wondered why we were investing over $100,000 in the Target Industry/Workforce Study” back in May 2017 and now we have the answer,” indicated Brad Allamong, Crossville-Cumberland County Chamber Director. “The pad-site, now a premier site in the state of Tennessee, will be marketed by us to the targeted companies identified in the study and also marketed on the state of Tennessee’s site.”

“Interchange Business Park has seen two significant developments within the last year, the expansion of the SKF building-a partner in the CoLinx family of companies and the location of Maverik Oils out of California,” noted Mayberry. “Once again, this success proves – if you have the site which is ready for development, you are going to have industrial expansion and relocation. Sitting right beside Interstate 40, we are in a prime location for growth. This is good for everyone.”

“During my campaign, I talked a lot about working together,” commented Foster. “We haven’t skipped a beat. Great things are ahead for our community if we will just commit to working in partnership for Cumberland County.”