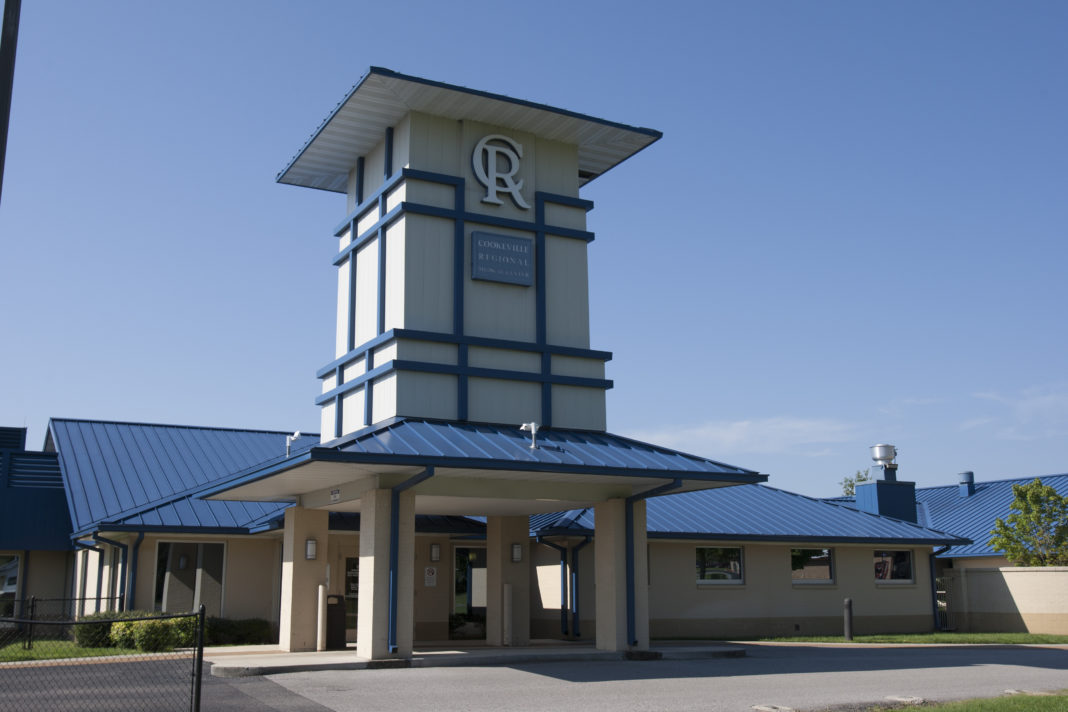 COOKEVILLE –Accidents and illnesses are never planned. You can’t schedule them, and they usually occur at what seems like the worst possible time.

What happens when you are well enough to leave the hospital but unable to function at home with limited care? This is where CRMC’s inpatient rehabilitation experts step in. For the past 15 years, Upper Cumberland residents have been able to receive transitional care that is rated among the best in the country. 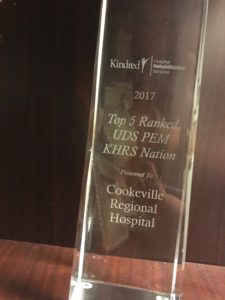 CRMC’s inpatient rehabilitation center expands on its outpatient rehab services. It is equipped to work with the sickest patients that are allowed outside of an acute hospital and their goal is to help the patient return home as quickly and safely as possible.

Both inpatient and outpatient rehabilitation services are located under the blue roof on sixth street. This helps maintain a comfort level for the patient as they transition from the hospital to the home.

“This used to be an old nursing home,” said Paul Korth, CRMC Administrator. “They built a new one and this came up for sale. We took a look at the opportunity here and said that would be a good place for both an inpatient rehab center and our outpatient rehab. We refurbished this and built on to the other side, the outpatient side, and put all of our services under one roof over here.”

The center’s success rate speaks for itself. Nationally, 70 percent of the patients receiving inpatient rehabilitation are able to return home. At CRMC, 85 percent successfully return home, a statistic well above the norm.

That success rate is why people are coming from states away to rehab at CRMC.

“We have patients all the way from Kentucky, Nashville, Knoxville, Atlanta. We had one from Ohio. Cookeville is the hub for a very large area, so they come from 100 miles away,” said Dr. Thomas Gannon, who has been with the center for 10 years.

Often area residents who have accidents away from here can’t wait to get back to Cookeville for their rehab.

“We had one lady that fell in the cabin they had rented while vacationing in Gatlinburg,” said Rosemary Downs, Program Director. “She wouldn’t allow them to do anything until we told her that she could come back home. This is where they want to be and that is a testament to our staff and Dr. Gannon.”

Staff consistency is a key to the center’s success. In addition to Gannon’s long tenure, Gina Babcock, Warren Johnson and Deb Scott have been with the center since it opened.

The center has 20 beds but rarely has less than 15 patients. There are two private rooms available but most patients, especially elderly patients, request a shared room.

When patients are referred to the center, the team reviews the patient records before sending a nurse out to evaluate the patient. Patients accepted have to be medically stable and physically able to begin a comprehensive rehabilitation program consisting of at least three hours of therapy a day, five days a week.

There’s always a flurry of activity when a new patient arrives at the center. Within two hours of arrival, the patient has been thoroughly evaluated and the staff begins to develop a plan of treatment.

Within the first 72 hours, a plan and goals will be developed centering on the patient needs. A patient’s family is very important to this process. Families help give an honest assessment of the patient’s home and any issues that could arise when the patient returns there.

Weekly, the therapy team will meet to evaluate the patient and to revise his/her goals.

No two days or patients are the same at the center.

“Each patient is so different,” Gannon explained. “It’s all very individualized. Our therapists, when they work with people with strokes or the acute post-surgical patient, there’s not a lot of gimmicks or toys to go along with that. It’s just good old-fashioned work and know-how, teaching a patient how to balance themselves, how to bear weight on a post-op leg, how to use a device correctly like a walker or something like that, even how to get up out of bed or take a shower. It’s functional. We’re goal driven.”

Sometimes it’s as simple as putting a mirror in front of the patient and showing them that they do still have a left side of their body because they can’t remember that it’s there anymore.

Sometimes, for an elderly person who has dementia but suffered a hip fracture and is only allowed to put half the weight on one side, it can be the whole staff working with them to not put too much weight on that leg, so it doesn’t re-fracture.

“For amputations it’s specialized,” Gannon added. “Medical brings over prosthetics to find the type of limb they need while we’re working on wound care of that leg. We’re shrinking down that residual leg preparing it for the leg that’s to come.

“For people that can’t swallow, it’s vital to start strengthening the muscles in their throat teaching them techniques. Just the speech therapist sitting there putting a spoonful of food into their mouths saying, tuck your chin in and pull back. It’s so varied what we do with each patient. We just never know from week to week what we are going to have. We have a staff that can do all of it, and we adapt to whoever is here at that time and go with it.”

Even nursing is different at the center.

“It’s not your standard nursing care, it’s rehab nursing,’” explained Downs. “Transferring a patient, not necessarily in a lift system. It’s nurses teaching independence too. Nurse’s aides doing the same thing. It’s very specialized. It’s very individualized. It’s a team sitting down trying and saying, ‘What can I do to maximize what this person needs?’ It’s fun to watch some days their brainstorming about how they are going to get there.”

It’s not uncommon for many of the providers, especially Gannon, to walk through a store in Cookeville without someone coming up and saying, “You took care of my mom or my dad or my uncle or something else.”

The Inpatient Rehabilitation Center of Cookeville Regional Medical Center is located at 215 W. Sixth St. To learn more about the center, call (931) 783-2800 or visit www.crmchealth.org.