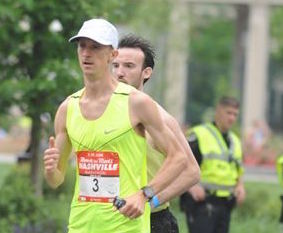 COOKEVILLE – It’s hard to imagine 10 years ago Brian Shelton stood on the sidelines.

The Cookeville runner and business owner has completed – and won – countless road races in the time since, from 5Ks to full marathons. On Saturday, he certainly captured the town’s attention, placing second at the Nashville Rock ‘n’ Roll Marathon, in his first attempt at the hill-laden, 26.2-mile course.

But a decade earlier, Shelton was simply a spectator there. He was fairly “inactive” at the time, he said (he was, however, a competitive cyclist in his college years), but after watching his now-wife, Lori, in the half marathon, it inspired him to lace up himself.

And the rest is history.

Shelton today owns Foothills Running Co., a WestSide retail business since 2011, an offshoot built from his running expertise. He’s done countless races – finishing first at the St. Jude Marathon in Memphis in 2011, and locally, winner of the most recent Upper Cumberland Haunted Half. But this past weekend, it was his performance in the Music City that seemed trending.

Shelton said he typically steers clear of Nashville – at least the full 26.2-mile distance – because of its daunting hills. Inclines don’t traditionally translate to fast finish times, something Shelton said he pursued relentlessly in 2015, but without good results. This year, he’s switched focus, and is competing more for place. He decided to give the Rock ‘n’ Roll a shot.

“It’s a totally different mindset, when you’re purely racing against the clock versus going in with an actual chance to win,” he said. “Last year, I was really obsessed with chasing times. I got really fit; I was in the best shape of my life in 2015. There’s zero doubt about it. I was doing races that were really big. For me, (Nashville) wasn’t so much about trying to run a specific time. It was more about placing as high as I could.”

He finished second, with a time 2 hours, 34 minutes, 43 seconds. That’s under a 6-minute mile and 9 minutes behind four-time race winner Scott Wietecha, who he knew would be his main competitor going in.

While the time was far from a personal best – Shelton said ran a marathon 18 months prior 10 minutes faster – it was significant in a number of other ways.

“This one’s special because it did get the attention of people at home, and that feels good,” Shelton said. “And it’s actually a race that inspired me to be curious enough to start running. For me, 10 years ago, it blew my mind that people would go and run event 13 miles. I can now go from that to lining up and competing and placing second. All that progression I’ve made in 10 years and all the life (my wife and I have) lived since. From dating to now being married with kids. It was a neat way to commemorate that as well.

“I’m happy with the way I ran,” he added. “The hills still really surprised me in the second half. I really do think second is as high as I could have finished that day.”

While Shelton has spent 10 years on the running circuit, he recently celebrated five as a business owner. Foothills Running Co. celebrated that milestone in March. The store quickly outgrew its original digs at 155 W. Broad St. and has called neighboring 25 W. Broad St. home since.

Shelton, a 2011 Ovation Award winner for Spirit of Entrepreneurship, says business is good. He recently launched an online store, and although web sales still account for a very small percentage of sales, it’s one way to attract and retain customers, especially in a market that might see increasing competition if Academy Sports + Outdoors opens a retail store in the proposed Shoppes at Eagle Point development on Interstate Drive.

“Small town retail is hard,” Shelton said. “You can’t just open a business and sit around and wait for people to walk through your doors. That’s not how it works. You have to give people a compelling reason to come shop, and there’s a lot of qualitative ways to do that. I feel like people think Foothills is a very authentic brand, because I’m a runner and the people who work there are runners. They appreciate that.”

As far as what’s next, Shelton says he plans to stick close to home this summer – although he’ll still be training. He’s eying the Anthem Richmond Marathon in November as his next milestone race. He and his wife lived in the Virginia capital city when they first married.

“That’s where my running really blossomed initially, so that’s a pretty tempting target,” he said. “The neat thing for me, especially over the last three years, my improvement has just been exponential. I guess that’s what draws everybody to running. A personal journey of improvement. It’s sort of the same in business, you’re always pursuing improvement; there’s always something you can do better.”