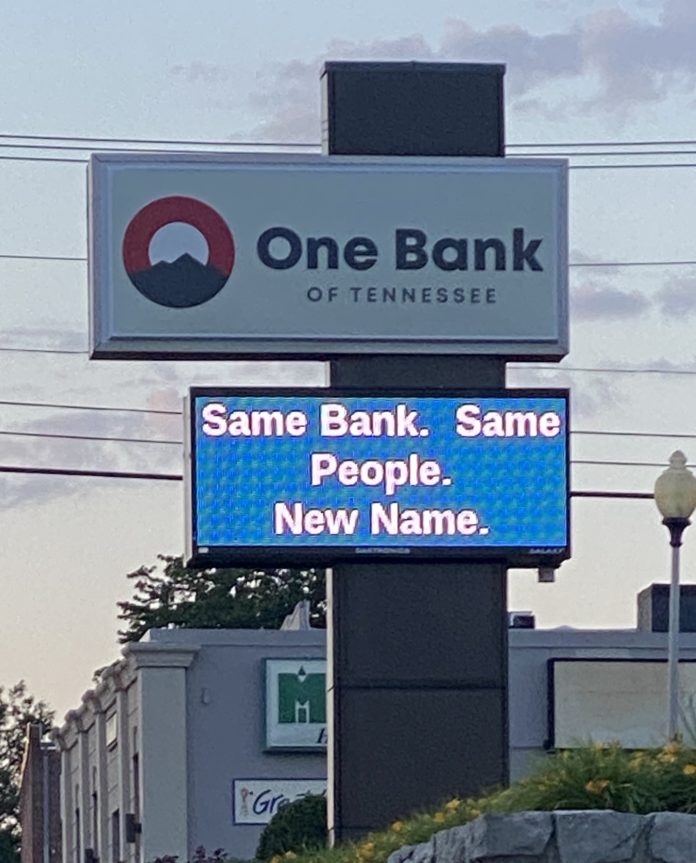 New name with same community-based mission from past leadership – “Is Jack Happy?”

COOKEVILLE – On Saturday at noon, Bank of Putnam County closed its doors for the last time in its nearly 120-year existence. Less than 48 hours later, the doors reopened as One Bank, the bank’s new unifying identity.

Employees switched over all forms, documents, business cards and even their name tags. In less than 48 hours, signs were even changed at each of the 20 branches.

Bank of Putnam County has been around since 1901. The company, founded in Monterey, has expanded to 20 bank offices, serving over 100,000 customers in nine counties, and in every county, the bank was operating under a different name.

“I’d like our customers to know how big we are, but I don’t want them to feel how big we are,” said Chairman of the Board and fifth-generation banker Elizabeth Ray Fournet, who stepped into the role following the death of her father, Jack Ray.

After hearing multiple stories, such as one about a Cookeville Regional Medical Center employee that rushed home to White County to deposit her paycheck without realizing that she could use one of the branches in Cookeville, bank leaders decided it was time for a change.

It was time for six brands to become one.

On finding a new name

“The one thing that was a challenge was finding something that…we wanted to be humble and true to ourselves and the roots of what the family brought to us,” said Executive Vice President David Kinchler. “When ‘One’ came up, it was such a unifying word. We had gone through hundreds of names, and no one could get on board. But once the ‘One’ happened – it was like we knew it when we heard it.”

History played a big part in the choice of the new name.

Founded in 1901, it was one family with one mission and one purpose. One Bank.

“For six generations, our family has worked to build a business which will serve every financial need of the folks in our market,” said Vice Chairman of the Board and sixth-generation banker Ammon Ray Hitchcock. “Our customers and their financial needs are our top priority. One Bank. One philosophy. It’s who we are. For generations to come, it’s who we will always be.”

The change in branding wasn’t done overnight. There were considerations on how to unify the new branches acquired in 2019 when BPC bought an East Tennessee bank, Citizens First. A new logo was designed combining aspects from both banks that feature the mountains of eastern Tennessee with the circle and colors from BPC’s familiar logo.

Focus on the community

“The last 90 days have probably been the craziest in my career – from the tornado hitting Baxter, and we had four employees who got destroyed over there, from that we went right into Liz’s father passing away, as soon as Jack passed away, COVID hit, and we made a decision on Friday to do the SBA loans,” shared President and CEO, David Williamson.

After working diligently throughout the weekend to create a new SBA loan department and develop procedures to assist customers with loans, the bank opened up the following Monday with a purpose and a plan.

“We got every one of them done, and you didn’t have to be our customer to get it,” said Williamson. “It’s not about being our customer, it’s about helping our communities.

“What’s the option? If we didn’t, are we going to end up as a ghost town? If none of these businesses had any money and couldn’t stay open, where would we be?” added Williamson.

Stewards of the community’s money

The bank’s current leadership relied heavily on its early leaders’ principles in uniting the BPC family and its newly acquired customers and branches.

“As a community bank – and this doesn’t come from us, it comes from Jack Ray and Gene Hooper – we view ourselves as a steward of the communities’ money,” said Williamson. “When people put their money on deposit with us, our obligation is to deploy that money back into the community and make it a better place to live. And that’s truly what we do.”

Fournet added that the bank was initially started by “five dudes” in Monterey that decided the town needed a bank, so they just opened one. They each had other careers and family obligations but just wanted to serve their community.

On the bank’s new website, there is a video showcasing the change to One Bank. One key phrase is a quote from former Chairman of the Board Jack Ray, “It’s not about the money.”

“I’ve heard it said that there are no more country bankers left, but we are, and we don’t want to change,” said Williamson.

One Bank can best be described as an “Upper Cumberland East” bank. Their branches stretch from Baxter to Oak Ridge, focusing on the rural areas and avoiding the metropolitan cities.

“Our banking works best in Clarkrange and Wartburg. We really have a call to provide a service in communities that can’t be reached,” Fournet added.

Fournet noted that the Wall Street Journal had run a story last year that the U.S. was developing financial deserts, with some businesses reporting that their business lender was at an office 90 miles away. It’s a goal of One Bank to prevent that from happening in its market area.

“Having interaction with your business banker is important,” expressed Fournet describing their local focus on lending. “We still lend a lot on that ‘C’ of credit called character. We want to foster that relationship.

“We want somebody in Jamestown to have every bit as much access to every financial service that somebody living in Belle Meade has.”

Throughout the years, the bank – specifically, Jack Ray – actually went out and made house calls, knocking door-to-door, to determine what the needs of its customers were.

“We’ve quadrupled in size in the last 18 years, and that’s how it was done…knocking on doors and asking, ‘what can we do for you, what do you need,'” said Williamson. “We’re a little different in that regard. Bankers are typically order takers – we’re not.”

Not only has the bank rebranded as One Bank, but it has also rebranded its insurance as One Insurance TN and its investment division as One Investment TN.

Fournet is the fifth-generation of the Ray family to work at One Bank. According to Fournet, her three sons, Ammon, Will and Johnny Hitchcock, all have worked there since they were old enough to work.

“This doesn’t happen in America,” reflected Williamson. “The fifth and sixth generation of one family. I think after the third generation guys usually go loopy, but we’re on the sixth, and they’re doing as good as they’ve ever done.”

So, the question everyone keeps asking about the rebrand is, “Is Jack happy?”

“Dad had seen all of this before he passed,” said Fournet. “He’s seen the brochure. He’d seen the logo. He’d seen what the letterhead was going to look like. He’s even seen most of the videos. He was tickled with it. That was important.”