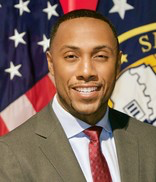 WASHINGTON – Ashley D. Bell was recently appointed as a Policy Advisor for Entrepreneurship and Innovation by the White House Office of American Innovation. Mr. Bell will also remain as the SBA Region IV Administrator overseeing the southern region including Tennessee.

The announcement was made in Atlanta on Oct. 16 at the Russell Center for Innovation and Entrepreneurship (RCIE) in front of a standing room only crowd.

“This is not a celebration, this is a groundbreaking,” Bell said as he described the work he has already begun to assist all entrepreneurs in creating businesses that may passed along to future generations. “You can’t pass a job along to your children, but you can pass a business on to them to run.”