Tennessee Tech Miracle, as the event was called, started with a goal of raising $20,000 for Monroe Carell Jr. Children’s Hospital at Vanderbilt, a local Children’s Miracle Network hospital. They more than tripled their goal, raising more than $64,000.

“None of us expected the response that we got,” said event organizer Mackenzie Goodwin, a junior psychology major from Memphis. “It was amazing.”

Tennessee Tech Miracle was the spotlight philanthropic event for student organizations participating in 2017 homecoming activities. Organizations began fundraising a little more than a month before the event and before the event day arrived, they had already surpassed the organizing committee’s $20,000 goal with $39,000 raised to start the night.

“The response we saw from the students about helping their community has been astounding,” Goodwin said. 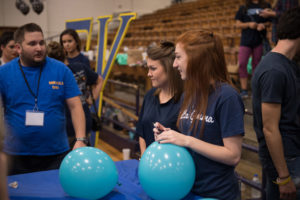 That Friday, students filled Memorial Gym where they participated in various activities and games and met eight families who had been helped by the work of the Children’s Miracle Network. Each family served as a team captain and the students were able to connect with some of the children their efforts would help.

“The teams were using social media and sending emails and so donors were seeing pictures of these students connecting with the kids and interacting with them,” Goodwin explained.

Seeing that students truly cared about the cause and that they knew exactly what they were working for kept the donors coming in. Since all of the fundraising was done through an online platform, donation links were making their way around social media and more than $20,000 was raised during the four-hour event, most of which came in $5 or $10 at a time, according to Goodwin.

“It is probably one of the coolest things we will ever do,” Goodwin said.

Goodwin and an event committee made up of students Mason Johnson, Jordan Turnage, Shayla Bradley and Brookland Gordan had the support of the Tech Activities Board and Dean of Students Katie Williams to make the event, which was part of a national network of programs raising money for the Children’s Miracle Network called Dance Marathon, happen.

“To see those families overcome with emotion, to see that number on the board over $60,000 was probably the proudest I have ever been to be a part of Tech’s campus,” Goodwin said. “It was a surreal moment.”

For their work, the organizing committee is up for two awards and they have set an even bigger goal for next year: $100,000.