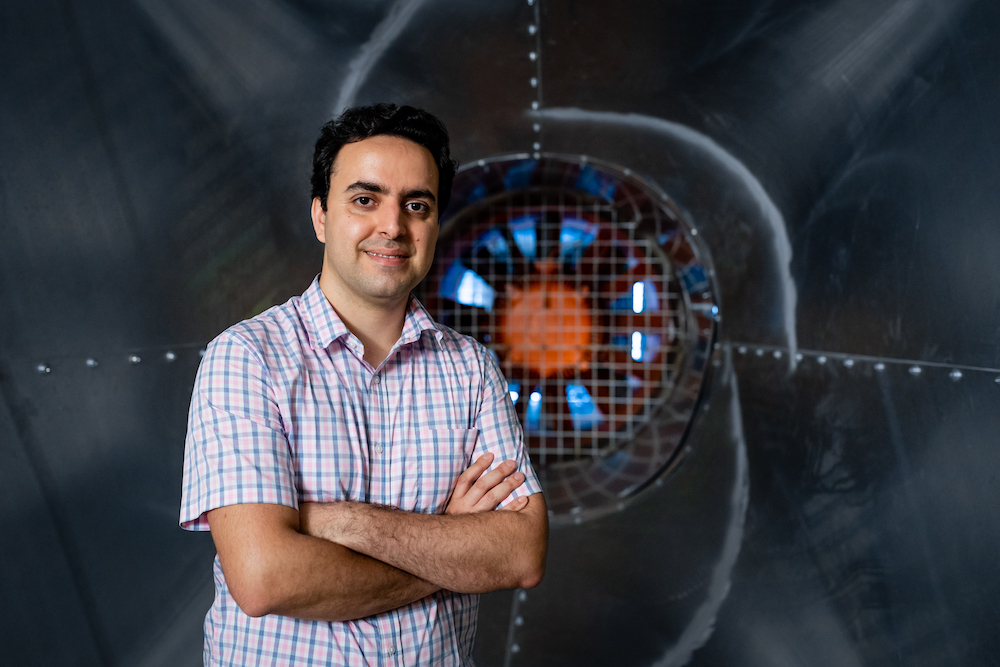 COOKEVILLE—As the world moves to generate power from renewable sources of energy to shift away from fossil fuels, large-scale solar photovoltaic plants—more commonly known as solar farms—are spreading across the Earth’s surface, thousands of acres at a time. But as governments, scientists and companies pursue these renewable-energy solutions to climate change, no one has considered their potential effects on the atmosphere and climate itself.

Ahmad Vaselbehagh, a mechanical engineering assistant professor at Tennessee Tech, recently received a $500,000 National Science Foundation CAREER Award to do just that. Over the next five years, Vaselbehagh and a team of student researchers in the College of Engineering’s Fluid Mechanics Research Lab will be studying how canopies made of millions of dark, tall, and hot photovoltaic panels in these enormous solar farms that extract huge amounts of energy from the Earth’s surface might alter local climates and potentially lead to new climate change problems.

“A substantial majority of the scientific community and policymakers pursue two goals: electrifying everything and generating the required electricity via renewable resources. That means we will need several hundred trillion kilowatts of energy, primarily extracted from the atmosphere as the most significant source of renewable energy,” Vaselbehagh said. “The neglected but crucial question is whether extracting hundreds of trillions of kilowatt-hours of energy from the atmosphere would alter the atmosphere’s physics, leading to a new weather and climate change era for another reason other than air pollutants.”

Using a two-stage field campaign and computational fluid dynamics simulations, Vaselbehagh will study the thermal transport dynamics within the atmospheric boundary layer above these utility-scale solar plants. The equations and parameters generated from the research can then allow meteorologists and environmental engineers to incorporate the effects of solar plants into climate change models.

“Mechanical engineering relates objects’ motion to the forces that drive the motion, which we call ‘dynamics,’” Vaselbehagh explained. “The moving matter could be air, and the driving force could be the pressure difference caused by the sun’s uneven heating of the Earth’s surface. Atmospheric airflow, or wind, is still a force-motion issue. A great deal of engineering structures and mechanisms constantly interact with the atmosphere and understanding these dynamics is vital in engineering education to developing more efficient designs and more effective strategies to operate them.”

The courses will pave the way for undergraduate students in middle Tennessee to become engaged in climate change education and discussion, as well as understand the impact of engineering solutions in global, environmental and societal contexts.

The Faculty Early Career Development (CAREER) Program offers the National Science Foundation’s most prestigious awards in support of early-career faculty who have the potential to serve as academic role models in research and education and to lead advances in the mission of their department or organization.

“Faculty who receive NSF CAREER awards have demonstrated that they are likely to lead major advances in their fields, as well as have a profound effect on STEM education,” said Joseph C. Slater, Dean of the College of Engineering. “Dr. Vaselbehagh’s research will not only lead to new innovations, but also provide Tech’s students the unique opportunity to learn how mechanical engineering skills can have a global impact on something like the climate.”

Vaselbehagh is determined to devote his career to understanding how the atmosphere responds to the major renewable-energy solutions the world is adopting as it addresses climate change—as well as inspire a new generation of mechanical engineers dedicated to addressing a dearth of scientific knowledge and leadership in the field.

“Failing to address this concern on time could result in making the same mistake that was made with fossil fuels, when the obsession with inventing more powerful engines saturated the scientific and engineering community to such an extent that their potential environmental impacts were overlooked,” Vaselbehagh said. “Had such studies been conducted on the direct effects of fossil fuels on the atmosphere, and consequently, the weather and climate during the industrial revolution… the current climate change issue could have been avoided or, at least, be less severe. Someone must ask this question about renewable power plants and develop a plan to respond to it.”