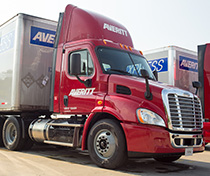 KNOXVILLE –Cookeville’s Averitt Express has been selected as a winner of the 2018 Tennessee Sustainable Transportation Award.  Averitt was honored because of its initiative to modify and retrofit thousands of its vehicles with new fuel efficiency equipment that resulted in 47,000 tons of reduced greenhouse gas emissions in 2017 alone.

“Sustainable transportation is an important factor in public health and the quality of our environment,” said TDEC Commissioner Dr. Shari Meghreblian. “The following award winners are being recognized for their innovative ideas to improve the health and well-being of Tennesseans, provide for a strong economy and protect our state’s natural resources.”

The Tennessee Sustainable Transportation Awards recognize outstanding initiatives to improve the efficiency, accessibility, affordability, and sustainability of transportation systems in the state. A panel of judges selected the following entities as the 2018 winners. A full description of the winning initiatives follows.

Averitt Express
In the pursuit of increasing its fleet’s fuel economy, Averitt Express, a transportation and supply chain management company based in Cookeville, has modified and retrofitted thousands of its vehicles with new fuel efficiency equipment. Major changes to Averitt’s vehicles include the utilization of auxiliary power units (APUs), three-minute idle shutdown technology, and aerodynamic side skirts. With these features, Averitt Express successfully improved the fuel economy and reduced idle engine time of its fleet, resulting in 47,000 tons of reduced greenhouse gas emissions in 2017 alone. Additionally, Averitt Express possesses 920 propane-powered forklifts, which produce less greenhouse gas emissions than their diesel counterparts, resulting in improved air quality at its shipping and packing locations.

City of Chattanooga Department of Transportation
In 2018, the Chattanooga Department of Transportation (CDOT) completed a $1 million Martin Luther King Boulevard (MLK Blvd.) Paving and Safety Improvement Project. CDOT performed street safety analysis on MLK Blvd. and requested public input on how to improve the area for multi-modal citizen access. As a result of this process, CDOT determined that the section of MLK Blvd. in Chattanooga between Georgia Avenue and Central Avenue required the addition of striped bike lanes and revitalized sidewalk access. Additionally, CDOT implemented road right-sizing and vehicle speed reduction techniques, decreasing the number of traffic lanes in the area and then building a new center lane to accommodate turning traffic. These features contribute to the safety of the road as well as to the feasibility of multi-modal transportation.

City of Kingsport
Since 2008, the City of Kingsport has undertaken impressive efforts to convert its vehicle fleet to propane autogas. As a result, the City now has one of the largest alternative fueled fleets in the state. The City’s fleet manager, Steve Hightower, originally took on the project to both make the fleet more environmentally sustainable and to save the city money in fuel costs. As of May 2018, the City’s fleet included 96 propane-powered vehicles, ranging from lawn mowers to police cars. The City also has 21 hybrid and electric vehicles currently in use. Through the use of these vehicles, the City has been able to displace usage of over 197,000 gallons of gasoline from 2013-2017. As a result of their leadership in the alternative fuel space, the City has also become an educational resource on propane-powered fleet adoption for other Tennessee entities, such as NET Trans in Johnson City. With Kingsport’s help and guidance, NET Trans implemented 14 propane-powered vehicles of its own in 2017. The City continues to provide best practices and other key information to other fleets transitioning to alternative fuels.

Cumberland International
Cumberland International, a sales, parts and service provider for trucks and trailers, recently launched and funded the “C10 Project: Keeping Tennessee Beautiful” in order to reduce the company’s impact on greenhouse gas emissions. The project was designed to increase the fuel economy of Cumberland’s Class 8 long-haul diesel trucks from 6-8 mpg to upwards of 10 mpg. The strategy for meeting this goal included an improvement to vehicle aerodynamics to reduce wind resistance, the utilization of auxiliary power units to reduce diesel idle times, and driver training on optimization of fuel efficiency. The modified C10 semi-truck routinely outperforms generic semi-trucks of the same size by around 2-3 mpg. These savings equate to approximately 30 fewer tons of CO2 emissions per truck per year, or 3,000-5,000 gallons of diesel fuel. One thousand of these C10 trucks were launched and sold in 2017, bringing the total fuel savings to 3-5 million gallons of diesel fuel per year and total CO2 emissions reductions to 30,000 tons per year.

Hamilton County Parks and Recreation
Hamilton County Parks and Recreation recently completed a project to extend the Tennessee Riverpark by three miles along the Tennessee River in Chattanooga. Through this extension, Hamilton County Parks and Recreation has expanded a significant alternative transportation corridor by creating a multi-use path and safe pedestrian/bike connection through a previously inaccessible gauntlet of active industrial properties, three railroads, an interstate, city streets and brownfields. The 12-foot-wide pathway features traditional trailheads, shelters, benches, lighting, restrooms, plantings and other amenities that make the walk a welcoming experience. The pathway also highlights Chattanooga’s river port heritage and revitalizes the area through the creation of public art gallery spaces. To make the experience truly immersive, the landscape architects developed a mobile app for the Tennessee Riverpark, which includes georeferenced maps, videos and augmented reality features.

Hytch, LLC
Nashville-based Hytch Rewards has created a smartphone app that provides a monetary incentive for ridesharing – encouraging users to carpool, take public transit, or use ride-hailing services like Uber and Lyft. Since its launch in February 2018, Hytch has sponsored more than 43,000 rides, resulting in 1.6 million vehicle miles avoided and 494 fewer tons of carbon in the atmosphere. Through the Hytch app, Apple and Android smartphones are able to connect to the platform, which enables companies and communities to sponsor customized incentives in order to achieve specific objectives such as shifting to off-peak commuting. The Hytch Rewards app is funded by community grants, brand partnerships and sponsorships from local companies including Nissan, Sprint, Lipscomb University, Reliant Bank and Goodwill Industries of Middle Tennessee. Users see in the app “trees saved” as they share rides, and the company buys and retires carbon-credits to certify the carbon savings. Recognized as a pioneering platform, Hytch has earned the Nashville Technology Council’s Emerging Company of the Year Award as well as TDEC’s Governor’s Environmental Stewardship Award.

Tennessee State Parks
Tennessee State Parks (TSP) recently completed the transition of all 650 golf carts at its nine courses from gas to electric. The switch will result in an estimated savings of $80,000 per year and will prevent the release of approximately 350,000 pounds of carbon dioxide emissions annually. The first 222 electric carts used at TSP courses were originally procured in 1996 for use at Harrison Bay, Cumberland Mountain, and Tims Ford State Parks. A second batch of 218 gas-powered golf carts were exchanged for all-electric models at courses within Henry Horton, Montgomery Bell and Fall Creek Falls State Parks in 2014. In 2017, the remaining 210 gas-powered carts in the state’s fleet were swapped for electric-powered carts at Pickwick Landing, Paris Landing and Warriors’ Path State Parks. Harrison Bay State Park has gone even further by replacing a number of other vehicles/devices on-site with electric alternatives, including lawnmowers, bunker rakes, green rollers and utility vehicles.

Vanderbilt University
Earlier this year, Vanderbilt University introduced a dockless bikesharing system, supported by ofo, to its campus community. A total of 120 bikes are currently available for use within the established bikesharing area, and users can pick up and park the bikes on Vanderbilt’s campus and in nearby neighborhoods. Users must download the ofo app to use the bikes, and ofo then synthesizes trip data to provide Vanderbilt with maintenance and parking reports, health and emissions data, and more. In just the first month, the pilot resulted in over 64,000 bike trips taken. During that time, 4,919 people registered to use the ofo app. The evident popularity of the bikesharing system implemented at Vanderbilt benefits the community by reducing carbon emissions, providing a cost-effective mode of transportation and encouraging physical activity.

More information on the Tennessee Sustainable Transportation Awards can be found at https://www.tn.gov/environment/program-areas/energy/state-energy-office–seo-/programs-projects/programs-and-projects/tennessee-sustainable-transportation-awards-forum.html.