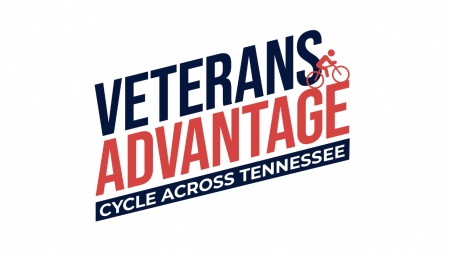 MEMPHIS – Cyclists taking part in the first-ever “Veterans Advantage: Cycle Across Tennessee” event began their statewide awareness ride on April 4 in Memphis. The cyclists are pedaling from the Bluff City to Kingsport in East Tennessee to bring attention to the benefits of hiring veterans and to highlight the services available to veterans at the state’s American Job Centers.

The American Job Center on Angelus Street in Memphis was the starting point for “Veterans Advantage: Cycle Across Tennessee” The city has the second-largest veteran population in the state of Tennessee.

“Veterans Advantage: Cycle Across Tennessee” has 17 stops along its route, and cyclists may choose from one to all 17 legs of the nearly 580-mile ride. Each leg has an assigned day from April 4 to April 21, 2022.

“As veterans transitioning into the civilian workforce, most of us really don’t know the American Job Centers exist. That means veterans aren’t getting career advice and assistance that is available once we leave military service,” said Eric Horton, the Veteran Services Director for the Tennessee Department of Labor and Workforce Development (TDLWD). “The Department’s Veteran Services team wanted to raise awareness about those services, and the benefits of hiring veterans, by taking our message across the state.”

While riding between Memphis and Kingsport, the cyclists will stop at American Job Centers and Chambers of Commerce along the route. This will put a spotlight on Tennessee’s rural communities, the veteran-friendly employers in those areas, and the free services available to veterans who are looking for a job.

A TDLWD mobile American Job Center will lead the cyclists as they make their journey from West to East Tennessee. Each day they will ride approximately 30 miles to the next stopping point. Each day will begin at approximately 8 a.m. and end at noon local time.

Several Tennessee businesses in communities along the event route have sponsored meals for the riders as they make their way across the state.

Interested cyclists and supporters can still take part in any one of the legs of the event. More information about “Veterans Advantage: Cycle Across Tennessee” and how to register to participate or become a sponsor, is available here.