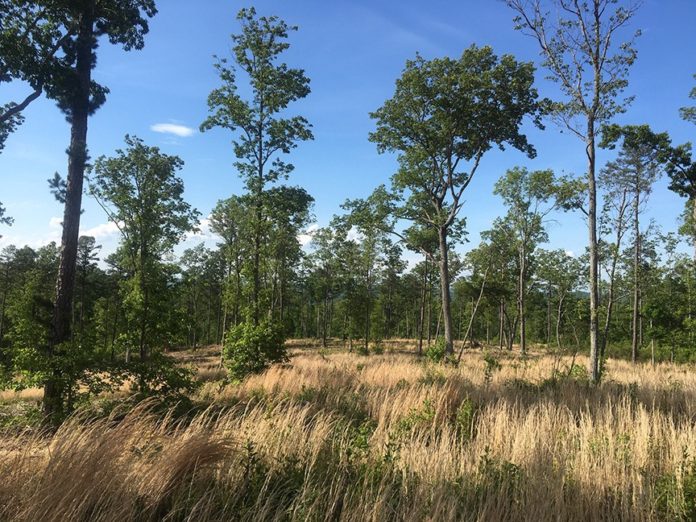 SPARTA – Tennessee Wildlife Resources Agency (TWRA) officials, along with leading agencies in habitat restoration efforts, met with concerned residents from White County and beyond on Monday, Oct. 4 at the Sparta Civic Center. More than 200 were in attendance, taking part in an agenda that included public comments and questions as well as a presentation on the management proposal to the Bridgestone Firestone Centennial Wilderness Area, a Wildlife Management Area (WMA), from Assistant Chief of TWRA Wildlife and Forestry Division Wally Akins.

While the surrounding plant communities will change, no trails will be removed from the WMA. Proposed changes will not impact the watershed and harvest operations will meet all requirements specified in The Guide to Forestry Best Management Practices in Tennessee. The area was chosen for restorative work due to its size and proximity to previous reclaimed habitat. This work directly correlates with the mission of the TWRA, which is to preserve, conserve, manage, protect and enhance the fish and wildlife of the state and their habitats for the use, benefit, and enjoyment of the citizens of Tennessee and its visitors. Restoration has been proven on other projects across the state including Catoosa, Yuchi, Foothills, Cheatham, Wolf River, Bark Camp and White Oak WMAs.  Additionally, in the past 200 years, over 90% of this endangered ecosystem has been lost on the southern landscape. This translates to over 110 million acres in the southeast and over 1.9 million acres on the Cumberland Plateau.

The first phase of habitat management was completed on the WMA in 2020 where approximately 380 acres were converted from loblolly pine forest to grassland/shrubland habitat. The proposed project will create an additional 230 acres of pine/oak savannas. This initial 230-acre project is the first effort to connect existing and already completed habitat work in order to reach a suitable sized area of early successional plant communities necessary to sustain grassland/shrubland dependent species.

Many associated grassland/shrubland dependent species (quail, dickcissel, prairie warbler, field sparrow, loggerhead shrike, yellow-breasted chat, indigo bunting, blue grosbeak, eastern cottontail, etc.) have been in decline for decades due to significant habitat loss. The northern bobwhite is an imperiled species in most of the eastern U.S. Management proposals will provide for these wildlife species while increasing imperiled habitat.

Resulting plant communities from the proposed management will also enhance habitat for popular game species, especially white-tailed deer and wild turkey. Within recently created savannas, deer forage availability increased an average of 90 percent and will likely lead to increased antler growth, as the responding plants provide the nutrition deer require for antler growth and development during the spring and summer months. With the vast acreage of oaks (current and remaining), acorn production as a fall food source would not be limited. Furthermore, restoration of the pine/oak savanna ecosystem will greatly enhance nesting and brooding cover for wild turkeys. Hunters should expect increases in harvests. Foothills WMA in Blount County saw extreme increases. Deer harvest increased by 250%, turkey harvest by 445% and bear harvest by 680%.