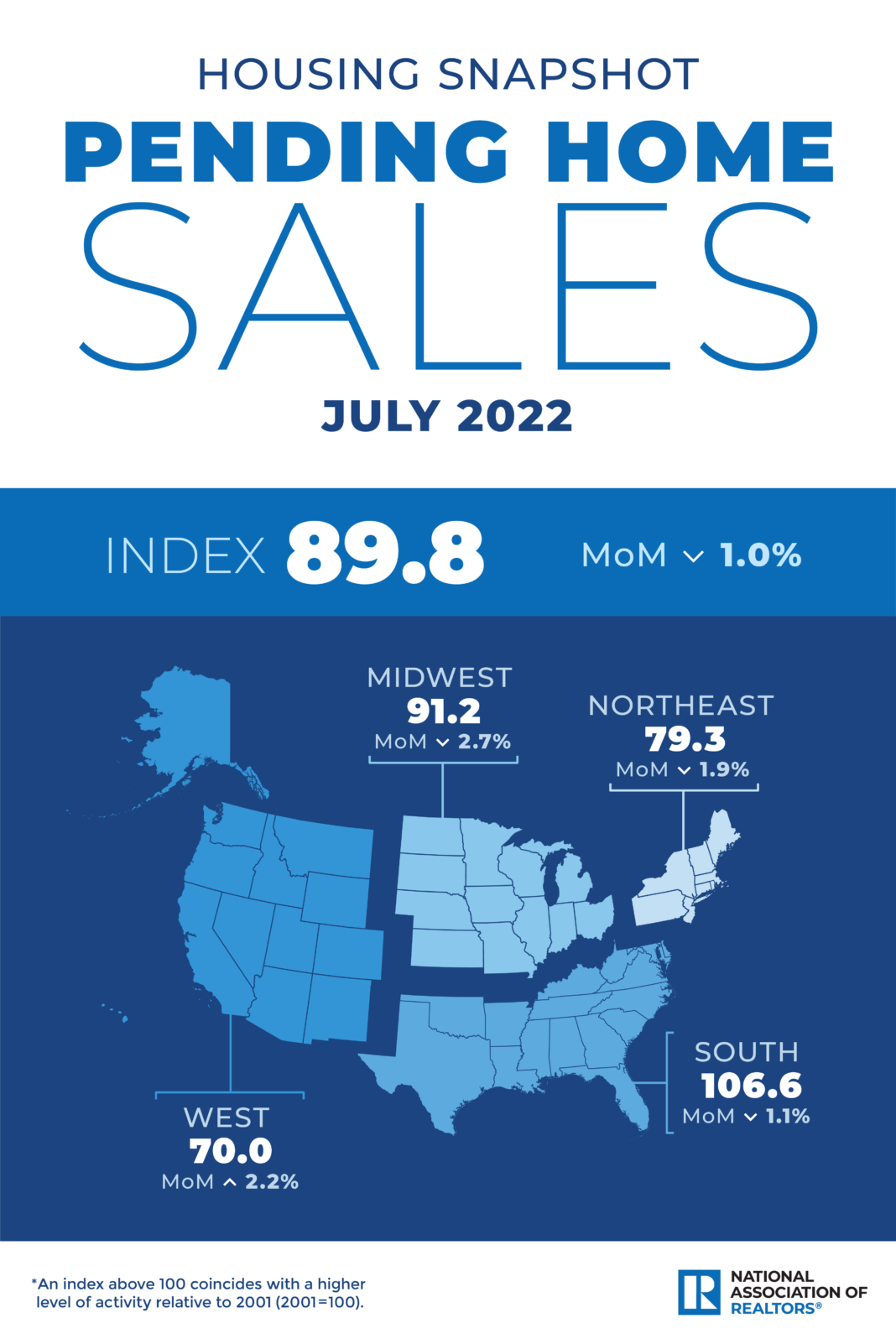 WASHINGTON – Pending home sales declined for the second consecutive month in July, and for the eighth time in the last nine months, according to the National Association of RealtorsÒ. Three out of four major regions registered month-over-month decreases, though the West notched a minor gain. Year-over-year, all four regions saw double-digit percentage slides, the largest of which occurred in the West.

The Pending Home Sales Index (PHSI),* www.nar.realtor/pending-home-sales, a forward-looking indicator of home sales based on contract signings, slid 1.0% to 89.8 in July. Year-over-year, pending transactions sank 19.9%. An index of 100 is equal to the level of contract activity in 2001.

“In terms of the current housing cycle, we may be at or close to the bottom in contract signings,” said NAR Chief Economist Lawrence Yun. “This month’s very modest decline reflects the recent retreat in mortgage rates. Inventories are growing for homes in the upper price ranges, but limited supply at lower price points is hindering transaction activity.”

In June, housing affordability plummeted to its lowest level since 1989, according to NAR. Accounting for a 30-year fixed-rate mortgage and a 20% down payment, the monthly mortgage payment on a typical home jumped to $1,944, an increase of 54%, or $679, from one year ago.

“Home prices are still rising by double-digit percentages year-over-year, but annual price appreciation should moderate to the typical rate of 5% by the end of this year and into 2023,” Yun added. “With mortgage rates expected to stabilize near 6% alongside steady job creation, home sales should start to rise by early next year.”

Pending contracts are good early indicators of upcoming sales closings. However, the amount of time between pending contracts and completed sales is not identical for all home sales. Variations in the length of the process from pending contract to closed sale can be caused by issues such as buyer difficulties with obtaining mortgage financing, home inspection problems, or appraisal issues.

The index is based on a sample that covers about 40% of multiple listing service data each month. In developing the model for the index, it was demonstrated that the level of monthly sales-contract activity parallels the level of closed existing-home sales in the following two months.

NOTE: Existing-Home Sales for August will be reported on Sept. 21. The next Pending Home Sales Index will be on Sept. 28. All release times are 10 a.m. Eastern.