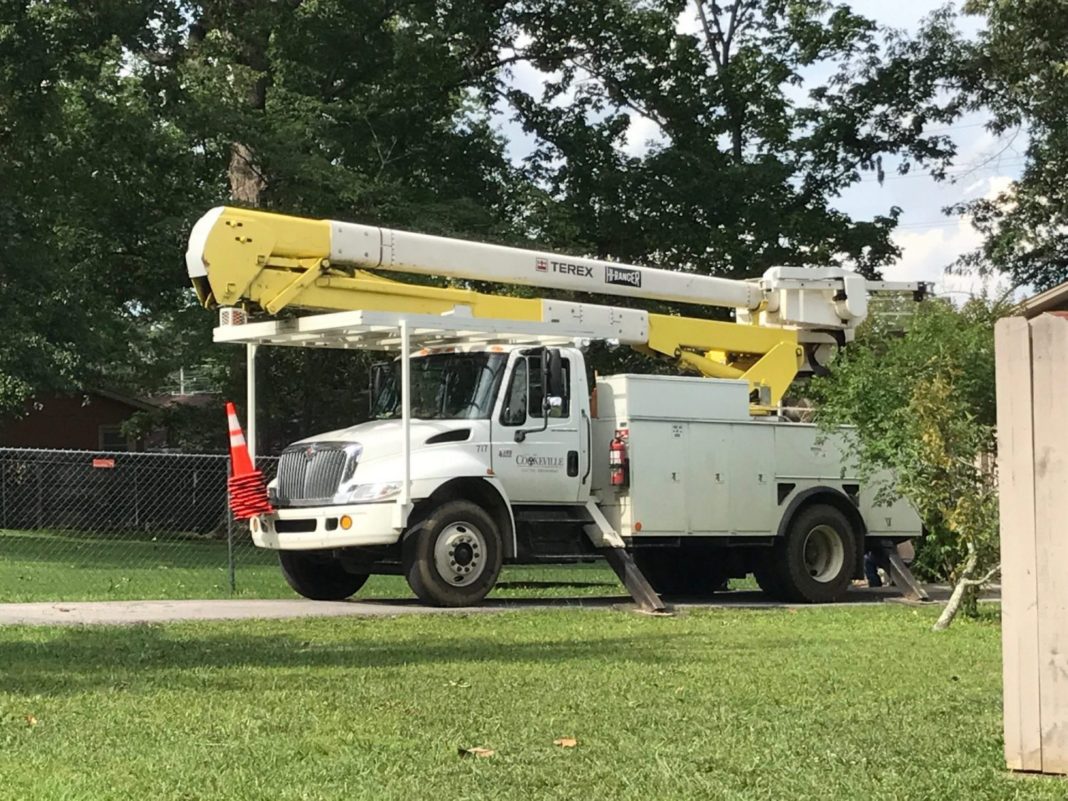 Nearly half of Putnam County — 15,000 customers to be exact — were without power at some point over Memorial Day weekend, according to Karen Brown of Energy Services at the Cookeville Electric Department.

As of Tuesday afternoon, approximately 50 customers were still without power and 40-plus customers would require electricians to repair damages at their home or business before service could be restored.

The Cookeville Electric Department has and will continue to work with others in the community to bring aid to those who need it.

“We’ve been teaming up with community services and food banks, because there are some who have no more money for the month and all their food is ruined,” Brown said. “We know how devastating it is. A lot of customers have lost food. There are some on oxygen — they have to have electricity.”

Not only has the city of Cookeville and Putnam County pulled together in wake of the storm, but crews from outside communities, including Murfreesboro, Gallatin and McMinnville, have answered the call to help restore power.

“Our biggest concern is to get everybody back on. We have worked around the clock to try and restore everybody’s power,” Brown said. “We have an emergency plan in place and responded as quickly as we could.”

Despite the community’s efforts several businesses faced more than 40-plus hours without power and were forced to remain closed even after the holiday.

Builder’s Supply Company and Seven Senses were two local establishments that experienced major delays after power went out during the last heavy wave of storms on Saturday night. The extended power outage was related to a partial roof displacement at Builder’s Supply, which landed on power lines and severely damaged lines and poles in the immediate area.

“The timing, as much as anything, was bad for us,” said Clark Simpson, General Manager of Builder’s Supply Company. “It’s a bad time to need people to clean up – with the construction going on and roads being built – it’s a bad time to find people who can put a roof back on.”

“Other than the roof and trying to get it rebuilt, we aren’t out of business,” Simpson said. “Matter of fact, on Tuesday, we probably did more business that day than we’ve done all year.”

“In business, losing power is tough anytime it happens,” said Jay Albrecht, owner of Seven Senses. “But in the restaurant business, losing power for over 46 hours is simply something we cannot easily recover from. We had to throw out well over a thousand dollars in spoiled food and incur the cost of remaking all of that food just to be able to reopen.”

“Seven Senses is on the same line as Builders Supply,” Brown explained. “Electricians started there Monday night and it took them three or four hours to get the line back on. It’s time consuming. When you get into the third and fourth day, it is frustrating for business owners.”

Fortunately, the only day of regular business Seven Senses lost was Tuesday, May 30, as the crew had to have that time to restock the kitchen with fresh food and evaluate inventory.

“Instead of being open for regular business on Tuesday, we spent the day getting everything re-prepped and restocked – basically starting over in our kitchen. That’s a lost day of revenue that I’m hopeful my insurance policy will help with,” Albrecht said. “Needless to say, we hope to never have to endure that kind of storm and its impact again.”

“I can’t thank the city and county crews enough for their efforts in trying to restore power and keep everyone safe in these trying times,” Albrecht said. “They risked their life for us, not to mention gave up their holiday weekend. As frustrated as I was about my situation, I always knew they were working tirelessly to make everything right again.”

Simpson estimated it could be three months before the roof of Builder’s Supply is completely repaired. With the emergencies to deal with around the city, Simpson understands there are more pressing matters and only so many companies qualified to get everything back on.

“We’ve got what we need,” Simpson said. “We can survive two days and are able take care of the people – it’s going to work out in the end.”