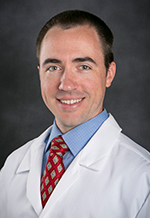 “With the brain, we just have minimal treatment for so many things,” Tedford said. “There’s so much left to do and to understand. There’s more that’s unknown than known still.”

While there may still be many unknowns yet to be discovered and cured within the field of neurology, Tedford, who has additional fellowship training in vascular neurology and stroke, is hoping to make a difference – starting with ensuring residents of the Upper Cumberland know and recognize the symptoms of stroke.

“My first two weeks here, I think I had 18 patients I saw in the emergency department with a stroke,” he said. “Only one got here within the three-hour window that we could really treat effectively. We’ve got a lot of work to do.”

“That was probably the better part of five years of constant medical appointments,” Tedford said.

During that time, seeing the impact that doctors could have in the lives of others was what initially interested him in medicine.

“It still seemed like a terribly long way to make a career,” he said. “So, I tried to do a bunch of other things but just kept coming back to it (medicine).”

Tedford, an Ohio native, attended medical school at the University of Cincinnati and completed his residency at Vanderbilt.

Even though Tedford has been at Cookeville Regional Medical Center for only two months, he has big goals for patient outreach and care.

“The biggest thing I can add here is like one nursing home visit at a time trying to convince people these are stroke symptoms, you call 911 if these happen,” Tedford said. “It’s going to take years to accomplish what I hope to accomplish here.”

CRMC is looking to offer a primary stroke center one day. Tedford says he hopes CRMC will receive accreditation in the next year.

An accreditation, he said, would likely catapult CRMC to become the third-busiest, in terms of patient volume, in the state; adding that, as of 2015, Cookeville was seeing more stroke patients per year than Vanderbilt.

“There’s just nothing in the 14-county area around us,” he said. “A big lure in my wanting to be here is this huge need.”

Originally from Cincinnati, Ohio, Tedford attended the University of Cincinnati before attending the Fellowship/Vanderbilt.

Outside of work, he and his wife stay busy with their children – two small boys, just shy of 3 years old and 1 year old, respectively.

After five years of living in apartments in Nashville, the family traded city living for country living; complete with a creek nearby for the boys to play in.

“We’re outside five-plus hours a day,” he said.

“We had every intention of finishing training and going back to Ohio,” Tedford said. “But, with every winter, as we would be out doing stuff and talk to family back home in Ohio, they would be talking about their 16 inches of snow. We though, you know, it’s not so bad here.”

Tedford, who loves being on the water when he isn’t at work, says he feels right at home here.

“I love fishing and anything by boat – sailing, kayaking, canoeing, flatwater, whitewater,” he said. “It makes no difference.