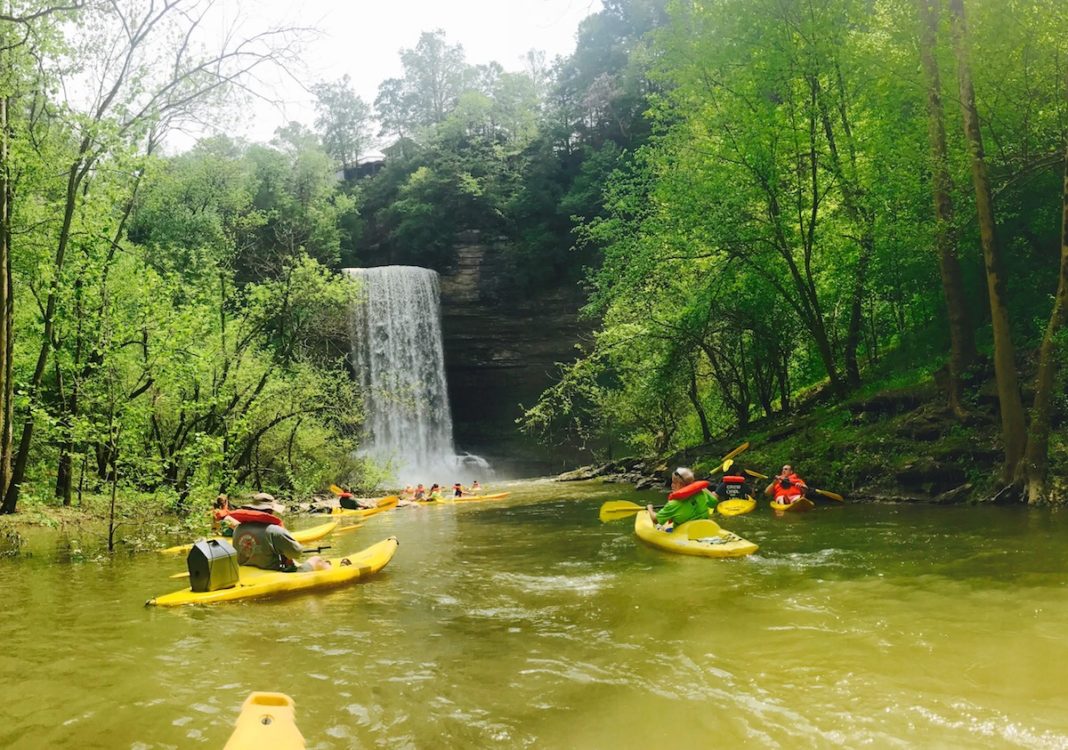 Canoe the Caney and Fancher Falls will be featured in an episode of Travel Channel’s Top Secret Swimming Holes this August.

Canoe the Caney started as primarily a jet ski and boat rental company in 1999. Then, in the wake of the economic collapse of 2008, the company began offering guided canoe and kayak excursions down the Caney Fork River.

The trips have become a big component of the business, but with the large amount of rainfall during the months of April and May, there are times when the water levels reach the point where guests could not safely make guided excursions to the lower river attractions.

But that simply wasn’t an acceptable answer for Jason Carver, owner of Canoe the Caney at JBeez WaterCraft in Silver Point.

Carver, along with a group of his crew members, rode jet skis right up to the falls, and after learning the trip was safe enough, Carver, instead of closing and cancelling the trips to the public, seized advantage of the raised water levels and created the Hidden Falls Excursion – a six-mile guided tour on Center Hill Lake that takes paddlers and canoers to Fancher Falls.

“If the water level was high enough and the falls were reachable by canoe, why not?” Carver said.

The Hidden Falls Excursion ran for two weeks and during that time scouts at the Travel Channel caught wind of the promotion and contacted Carver, letting him know they were interested in filming the trip to the swimming hole.

The trip was quickly booked.

Leaving from the Cookeville Boat Dock just before 6 am on the first Tuesday in June, Carver, several members of the Canoe the Caney crew and a Travel Channel producer and cameraman made a day of the six-mile excursion to Fancher Falls, spending 6 am to 5 pm on (and in) the waters of Center Hill Lake to film for an upcoming feature on Top Secret Swimming Holes.

“It was the best time I’ve had in years,” Carver said. “I was like a little kid. It was a great experience all the way around.”

Carver joked, referring to the physical “criteria” asked by the Travel Channel, he could have used a few more months of preparation for the show.

“They wanted us to swim – get in the water and climb up on the waterfall,” Carver said.

With the right water level, guided canoers of the Hidden Falls Excursion can see more than 10 waterfalls, including Fancher Falls. And luckily, “Around every turn, there’s a waterfall,” Carver said. “It’s really an awesome place.” 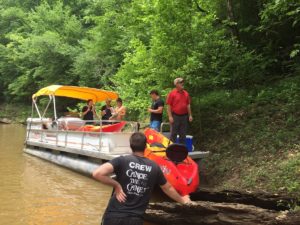 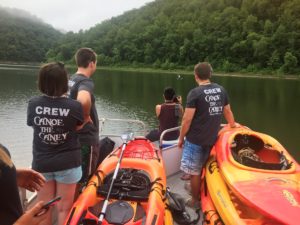 While the Hidden Falls Excursion is suspended for now, the water level is supposed to be moved back up to summer pool, Carver was told, by the Army Corps of Engineers.

Until then, guided trips will continue when the water is high enough, which is not uncommon in either the Fall or Spring seasons, Carver added.

Travel Channel will air the episode Top Secret Swimming Holes and will feature the hidden falls of Center Hill Lake in August.

Canoe the Caney at JBeez WaterCraft in Silver Point is located one mile off Exit 273 near Cookeville near at 17055 Smithville Hwy, Silver Point, TN 38582. 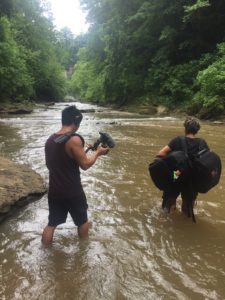