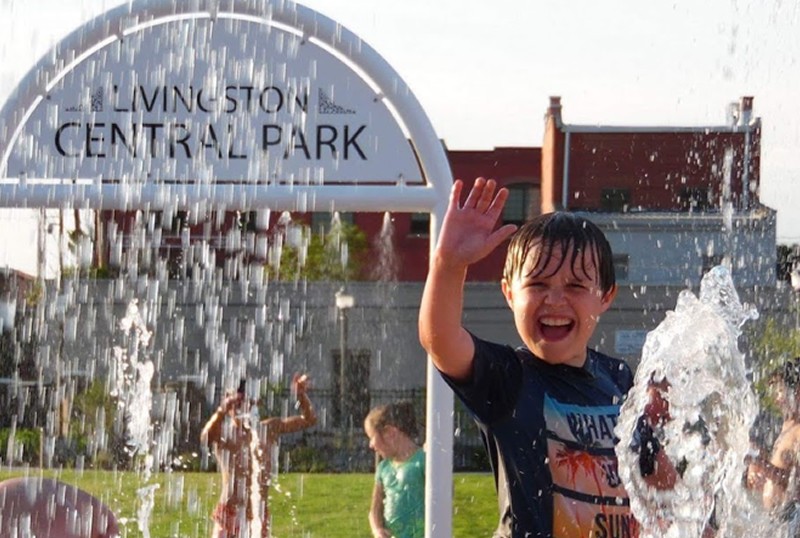 LIVINGSTON – Livingston has been a leader in downtown revitalization for more than a decade. The historic courthouse square along with the county’s rich outdoor recreation and Americana Music heritage serve as the primary amenities and economic engines for tourism in the community. With the construction of a new downtown park and event space, Livingston city leaders saw the opportunity to connect and grow these assets and improve the quality of life for residents.

The city was selected in 2007 as one of Tennessee’s Courthouse Square Revitalization Act pilot project communities. This allowed for the allocation of $.05 of each $.07 collected in sales tax from their designated downtown district to be returned for courthouse square improvements. The Livingston Downtown Revitalization Committee (DRC) led the Courthouse Square Revitalization program. The DRC consists of the mayor, Livingston-Overton County Chamber of Commerce representatives, downtown business leaders and property owners. Through this program, the committee has made strategic investments to make the courthouse square a vibrant home to many events that leverage the county’s Americana music assets.

In 2012, the Livingston Vision 2035 proposed building a Central Park. Livingston Vision 2035 allowed citizens to offer ideas of what that they would like to see happen in Livingston and Overton County. The process evaluated areas such as public safety, health, education, restaurants, hotels, nature and recreation. One of the top five recommendations was to build a park with an amphitheater, children’s activities and a walking trail. The resulting strategic plan positioned city leaders for future implementation.

Livingston was selected to participate in the TNECD Tennessee Downtowns program in 2016. The Livingston DRC is leading this effort to expand revitalization efforts to a larger downtown district encompassing the courthouse square, areas around Central Park and a nearby street containing a professional services district.

Livingston leaders are using the National Main Street Program Four Points of design, promotion, economic vitality and organization as the basis of their revitalization efforts. Their top priority in the design category is to protect and rehabilitate buildings by providing façade grants to property owners through the use of Tennessee Downtowns grant funding. The Livingston DRC identified streetscape improvements to connect the square and Central Park as another top design priority. Fortunately, city leaders had already secured funding for streetscape infrastructure improvements through a TDOT Transportation Enhancement grant in 2016. This TDOT grant will provide funding for new crosswalks on the square and sidewalks to connect Central Park with the Livingston courthouse square, library, farmers’ market, city hall and nearby neighborhoods. The mayor and chamber leaders are also working on the organization point by adding new stakeholders to the DRC and exploring the process to become a certified Tennessee Main Street community upon completion of the Tennessee Downtowns program in 2018.

In May 2017, the DRC hosted their ribbon-cutting ceremony for the Livingston Central Park. The city of Livingston leveraged local and state funding for construction and equipment of the park. Citizens and visitors now enjoy a state-of-the-art amphitheater complete with LED lighting, sound system and movie screen; a walking trail lined with trees and flowers; benches and trash receptacles to match those around the courthouse square; a large picnic shelter and water bottle filling station; a guitar-shaped splash pad to reflect Overton County’s “Home of Americana Music” brand; and a variety of colorful, all-inclusive play equipment with musical components that complement the city’s musical heritage. Central Park is enclosed by brick and iron fencing and includes 10 vendor stations with electrical service for downtown festivals. Restrooms and all park facilities are compliant with the Americans with Disabilities Act, and the park offers something for all ages and interests in an attractive, relaxing environment.

The Livingston Central Park has increased the number and size of community events that show immediate positive economic impact. The sales tax revenue increase from downtown events since May 2017 is $836,582, an increase of 27.8 percent from the same period one year earlier. Sales tax revenue for July, August (Solar Eclipse) and September 2017 increased 7.2 percent for that quarter alone. These increases show that the park is bringing new money into the community, which helps the economy, local businesses and residents and improves health outcomes. First year project results include: