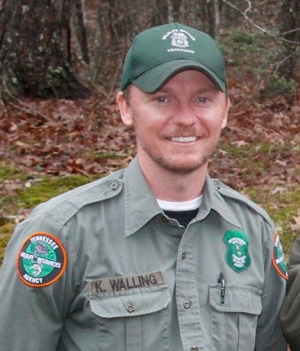 NASHVILLE – Kyle Walling has been named the Tennessee Wildlife Resources Agency Wildlife Officer of the Year for the Southeastern Association of Fish and Wildlife Agencies (SEAFWA).

The recipient of the award was announced by Darren Rider, TWRA Boating and Law Enforcement Division colonel.

Walling is a wildlife officer in TWRA Region III’s District 31 and was selected among other TWRA law enforcement officers to become the state recipient. Walling is assigned to Van Buren County, but works throughout the district’s 12 counties. He will be recognized at the annual SEAFWA meeting in October, this year to be held in Mobile, Ala.

“It’s always a difficult situation when one officer is selected out of a group of officers that have all gone above and beyond the duty of ensuring Tennessee hunters, anglers and boaters are provided safe and enjoyable recreational opportunities,” said Rider. “All these officers are to be commended for their professionalism and efforts they displayed this year. All these officers had a fantastic year, but Kyle really excelled in all aspects of his job.”

“Kyle’s efforts in excellence and innovation were also great,” said Rider.  His dedication to the youth of the community and knowledge that he passes on is an achievement that will ensure the longevity of hunting, fishing, and trapping for many generations to come.

“Kyle is certainly not only a great asset for the agency, but also for the hunters, anglers and boaters in the state of Tennessee,” said Rider.