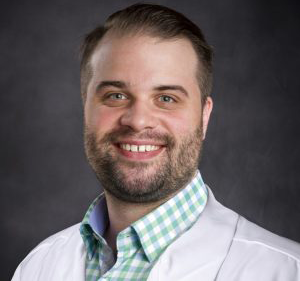 COOKEVILLE – Cookeville Regional Medical Center’s newest M.D. may have some small-town roots, but he’s looking to make a big-time impact on his new home at Tennessee Heart.

Dr. Matthew Sample, a cardiologist, was raised in the small town of Pickens, Mississippi – population 1,085 – the son of a farmer and a schoolteacher. Growing up, however, he had career aspirations of a different kind it seems. He wanted to be a rock star, he says. Late in high school, however, his focus shifted. Medicine, for the first time, crossed his radar. The rest, as they say, is history.

He attended community college before transferring to Mississippi State, and later, finished medical school at the University of Mississippi. While at Old Miss, he “fell in love” with cardiology, he says. His specialty was chosen.

“One of my buddy’s, his dad was a primary care doctor,” Sample said. “We never really had any direct conversations about it, but that (indirect) exposure and just the way he lived his life probably stayed with me.

“I always thought I would end up doing primary care, family medicine. But one of my professors at Old Miss was a cardiologist,” he added. “He was that breed of doctor that doesn’t really exist anymore, the kind who walks into a room, puts their hands on a patient and comes up with these incredible diagnoses that I would have to get all sorts of tests (for). I just enjoyed watching this guy practice medicine.”

Sample moved to Tennessee after med school and further honed his cardiology skills with a residency in internal medicine and fellowships in cardiovascular medicine and interventional cardiology, respectfully, at Vanderbilt University. Even while living in Nashville, a mere 80-ish miles away, Cookeville was admittedly not on his radar, at least not until an attending suggested he explore employment opportunities here. That bit of advice proved a perfect fit, both professionally and to suit Sample’s outside interests – literally. He’s an avid kayaker/hiker, and spends his free time and weekends exploring the region’s array of waterfalls, rivers and trails.

“Every time you turn around, you’re looking at another waterfall, so it’s kind of a Mecca for me,” he said.

“Overall, this place is a hidden gem, specifically the hospital,” Sample added. “(CRMC) is doing things I never thought possible in a town this size, and something about that excited me. I wanted to be a part of it.”

“Everyone is so down to earth; they’re all extremely well-trained doctors,” he said. “It’s definitely growing, and hopefully, within the next couple years, we’ll be able to expand what we’re able to offer even more right now.”

He sees all kinds of patients who are dealing with cardiovascular illness, including coronary artery disease, the most common type of heart disease, but has a special interest in structural heart disease and valvular heart disease. He hopes to help bring the newest treatment options to the Cookeville area.

His patient load is already building.

“Coronary artery disease is rampant, especially in the southeast, and Cookeville’s no exception,” he said. “There are patients with undiagnosed (conditions) walking around every single day, so that’s a need I’m not sure we’ll catch up with anytime soon.

“But once I’ve got my feet under me, I want to get involved. I don’t ever want to feel that I just work somewhere; I want to feel like I have a vested interest and to be a very central part of what keeps this place as good as it is – and help make it even better.”