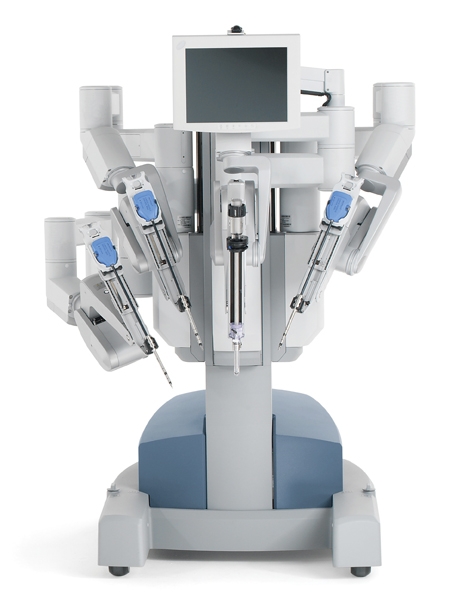 COOKEVILLE – In 2007, leaders at Cookeville Regional Medical Center welcomed a new member to the hospital’s surgical team that would forever change the way many surgical procedures were performed. Now, a little more than a decade since the first da Vinci robot was introduced at CRMC, the hospital is closing in on another milestone – its 2,000th robotic-assisted procedure.

“It shows the hospital’s commitment to robotic surgery,” Dr. Quinton Cancel said of the milestone. “You want to go to a place that has high volume to get your procedure done because they usually have better outcomes.”

According to Intuitive Surgical, the company behind the da Vinci series, da Vinci Surgical Systems have been used for more than three million minimally-invasive surgical procedures since 2000 and can be used for a variety of surgical needs.

At CRMC, da Vinci surgery is used across five specialties – cardiothoracic, gynecology and urology, general surgery and E-N-T (ear, nose and throat). The hospital was the first in the state to offer a five-specialty robotics center; meaning more surgical candidates are able to receive care close to home while helping CRMC secure its position as one of the leading healthcare providers in the region and state.

“We’re one of the few hospitals that have multi-specialty services using it,” said CRMC CEO Paul Korth.

The hospital’s first da Vinci system was retired and replaced in recent years, a nearly $1.5 million cost to the hospital.

“It is more expensive, from a true cost standpoint, to the hospital. It’s much more costly to us to do these type of procedures because the robot itself is a very, very expensive – at least $1.5 million to $1.7 million – piece of equipment,” said Korth.

The current device features an additional arm that allows for stapling or suturing, using preloaded cartridges. This provides greater control when closing surgical incisions but can cost more than supplies for traditional methods. This updated unit also provides a training simulator, allowing surgeons to keep their skills sharp.

There are many working parts to the da Vinci system; all vital to the success of each procedure. While robotic components physically come into contact with patients in order to carry out commands, the device is helmed by surgeons who are expertly trained and certified to use the da Vinci system.

Surgeons are stationed at the device’s console where they are able to view a high-definition, 3D image of the surgical site inside the patient’s body. The patient side cart, with three or four robotic arms used to carry out the surgeon’s commands, are controlled by the surgeon, whose hand, wrist and finger movements are translated into precise, real-time movements of the surgical instruments attached to the robotic arms.

Much like playing a video game, except on an infinitely grander scale, the da Vinci system requires excellent hand-eye coordination and complete concentration.

“There are studies showing that people who have played video games are better at robotic surgery,” said Cancel.

But, unlike playing a video game, where a sneeze or sudden unexpected movement by the person holding the controller could mean disaster for the on-screen character, the da Vinci console has safe guards in place to ensure only intended movements translate through the robot’s arms and instruments.

“If your head is not engaged in the (da Vinci) console, that robot doesn’t move,” Cancel said. “You have to stay focused. If you sneeze or put your head out and you had your hand on the controller, the robot would not move.”

Governed by a board within the hospital, comprised of trained robotics medical personnel, the robotics program at CRMC self-imposes strict guidelines regarding the training and usage of the da Vinci system.

“You do have to go through a pretty rigorous training. You can’t just walk in and say, ‘I want to be a robotic surgeon.’” – Dr. Bert Geer

Of the hospital’s nearly 2,000 robotic-assisted cases, approximately half of those have been completed by Geer who began implementing the robot in his procedures in 2009.

“I was a little bit resistant to do it right off the bat,” he told the UCBJ. “I used to do a lot of laproscopic surgery and I thought I was pretty good at it.”

After a patient of his was diagnosed with cancer, Geer contacted a colleague who, at that time had performed “a few hundred” robotic surgeries.

“I said, ‘Well, let me bring my patient down here and you do her surgery and let me watch,’” Geer said.

After less than an hour in surgery and only losing a minimal amount of blood – Geer estimates approximately two tablespoons worth – the patient was able to go home the following day. The same procedure, if done traditionally, would have required a large midline incision and an average hospital stay of at least five or six days.

Instead of waiting weeks or months, some patients are cleared to return to work in a matter of days, depending on the type of procedure they’ve undergone and their occupation.

“The patients get over surgery faster,” said Geer. ” They can go home the same day or the day after surgery.”

Shorter recovery times mean patients are able to heal faster and get back to their daily activities sooner.

“(Getting) back to work is the big key for our patients and getting them back to a healthy, normal lifestyle,” said Korth. “Anything we can do facility-wise to continue that is better for the patients and it’s what the patients are looking for.”

As the hospital closes in on 2,000 completed robotic procedures, there are plans to host a celebration marking the milestone. The public is invited to attend a celebration, slated to take place Feb. 13 at the main lobby of the hospital from 12 p.m. until 2 p.m. There, attendees will be able to see the da Vinci robot in person.