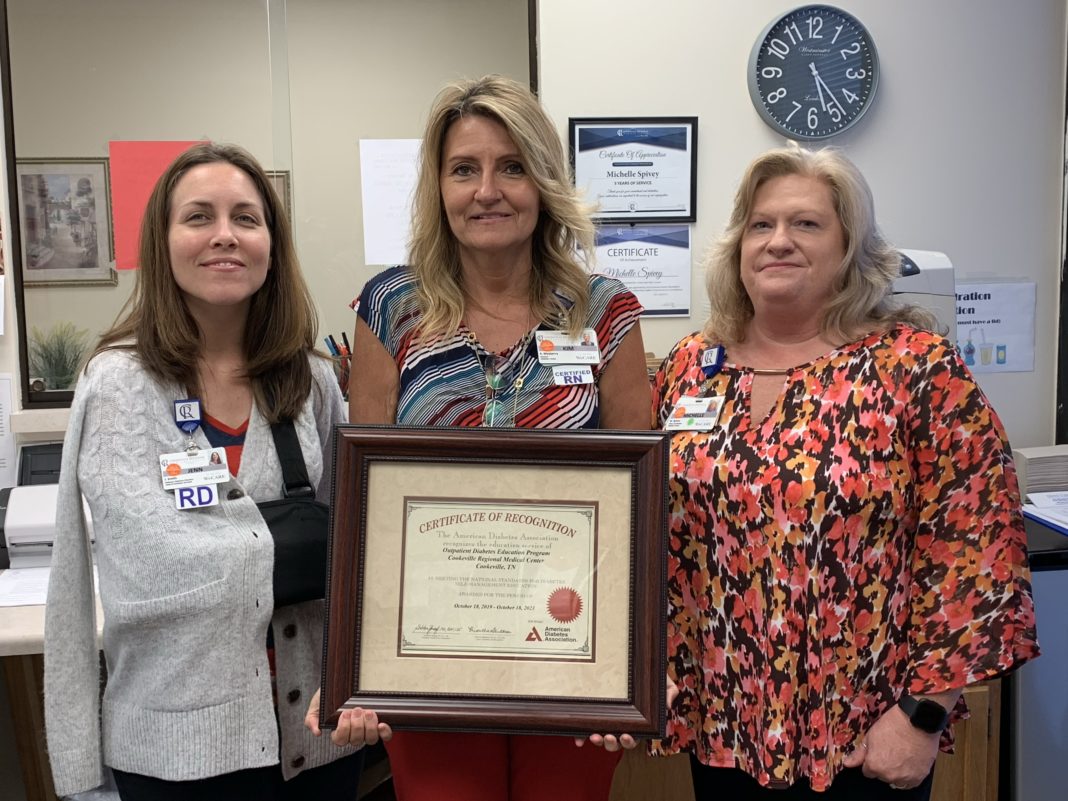 COOKEVILLE – The Cookeville Regional Medical Center Diabetes Center was recently recognized by the prestigious American Diabetes Association Education Recognition Certificate for quality diabetes self-management education and support (DSMES) service. This designation means that the ADA has found that Cookeville Regional offers the type of high-quality education that is an essential component of effective diabetes treatment.

The certification shows the ADA’s belief that the CRMC Diabetes Center is among the nation’s best in providing guidance to diabetes patients and is good for four years.

“The ADA Certificate is great. Not everybody has one, said Scott Lefti, CRMC chief nursing officer. “What it shows is we’ve gone the extra step in terms of making sure we’re meeting the recommendations of the American Diabetes Association in terms of how you help patients with diabetes. It’s a lot of hard work.”

This year is the first time that the program has been certified since Mayberry, Michelle Spivey and Jennifer Smith have been with the program.

“Kim and her team are very dedicated, very passionate about what they do,” said Lefti.

CRMC’s Diabetes Center is focused on helping patients learn to better self-manage their diabetes. This service is much needed since, according to Lefti, Tennessee is fifth in the nation in numbers of people living with diabetes.

One of the things that set CRMC’s program apart is they are intensely goal-focused. The program offers both one-on-one and group classes. Patients are provided with a lot of food knowledge.

Problem-solving is also a key focus of the program with Mayberry bringing it down to a useable level, not just the knowledge of the theory, but what the patient can actually do to achieve the desired result.

A big part of what they do is teach people how to deal with situations and be independent, self-management.

“We want to teach patients to be as independent as we can, so problem-solving is a big part of that,” Mayberry explained. “For instance, I’m on a pump, and I have supplies, but I drove three or four hours from home, or I’m in another state, and I forgot my reservoir. What am I supposed to do about that, and how can I fix that problem?”

At each meeting, patients are asked to set two goals. At subsequent meetings, they are asked about their progress on the goal, and CRMC staff works with them to develop plans if progress isn’t being made toward the goal.

“The whole thing is overwhelming, and when you can break it down into the small, little baby steps to meet the goals, and they actually can see the progress – thrilling,” said Mayberry.

The staff of the Diabetes Center was happy to receive the certification.

“We were just thrilled and excited to have confirmation that what we thought we were doing well was actually what needed to be done, so we couldn’t be happier,” added Mayberry.

“I want patients to know that they are getting the highest standard of care that they can get. That everything that’s clinically been studied and the evidence that is out there – that’s what they are getting. We’re current on that, and that’s why we’re recognized, and they can trust us to stay that way and provide them with that standard of care. At CRMC, they are going to get that caring, and the understanding and that one-on-one.”