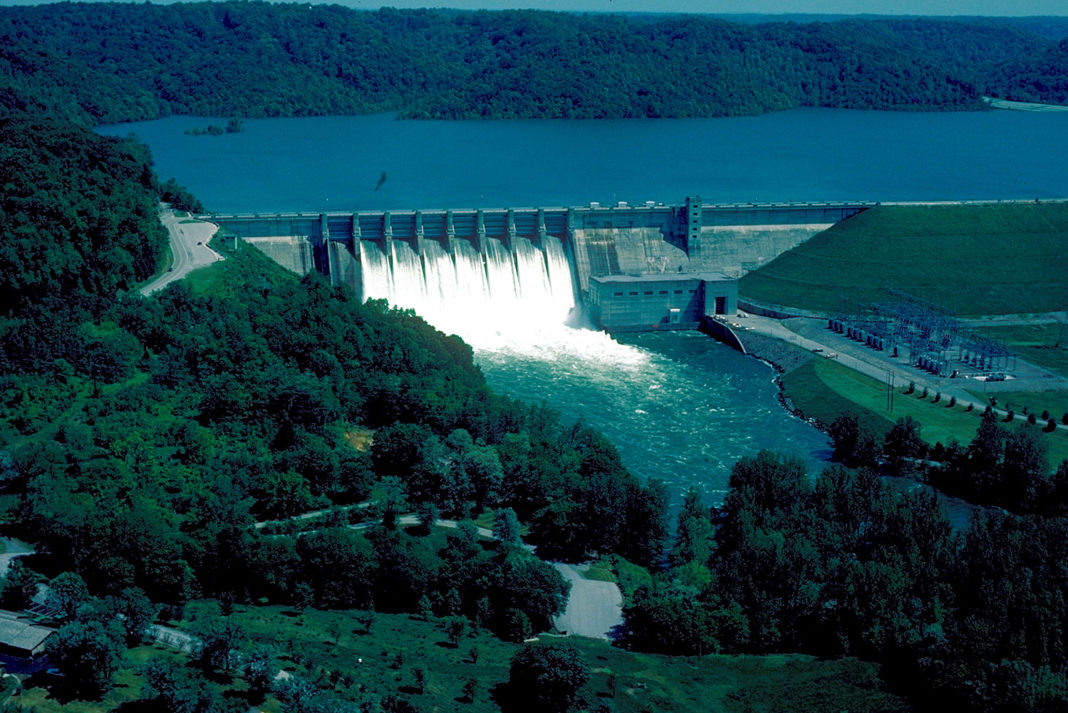 Replacement is needed because a Spillway Radial Gate Evaluation Design Document Report in 2016 revealed the eight spillway tainter gates are subject to overstress due to trunnion friction issues. Trunnion friction is the force generated around the trunnion pin during a gate lifting operation. It is caused by the bearing of the trunnion pin against the gates’ trunnion hub and bushing, which is the rotating point of the gate. In addition, the gates and lifting equipment have been in operation since the dam was completed for full beneficial use in 1948.

Omar Acevedo, Nashville District project manager, said the contractor will systematically replace each gate. The contractor is limited to three inoperable gates at any period of time, always leaving five operable gates. As an additional risk reduction measure, only one gate bay will be open at any given time during construction. Replacement of gates will only occur between June and November each year, which is considered the dry season, targeting lower peak summer lake elevations.

This replacement project will ensure the authorized flood-risk-reduction capabilities of the project will be realized for many years to come.

“The key takeaway is that public safety is our top priority,” Acevedo said. “Corps of Engineers’ water managers will maintain lake levels within current parameters agreed upon with the Southeastern Power Administration and the public will not experience significant drawdowns of the lake elevation. The most distinguishable change to reservoir levels during the construction period, may be a lower peak summer pool from 648 feet to closer to 645 feet. This adjustment would lower project risk during construction while still falling within current operating targets.”

Acevedo said it will initially take some time for the contractor to begin fabricating the new gates, so he doesn’t expect significant construction impacts in the near term to traffic crossing the dam on Highway 96. As the project proceeds later in 2023, the Corps of Engineers plans to communicate any road closures and impacts with signage, news releases and posts on Center Hill Lake’s Facebook page at http://www.facebook.com/centerhilllake.

“The Corps of Engineers will do everything possible in the planning and execution phases of the project to reduce traffic impacts to local businesses and residents,” Acevedo added. “Traffic on Highway 96 will be reduced to one lane for the duration of the construction and occasional full closure up to 24 hours, but not on weekends.”

The contractor will also have to modify the bridge substructure for accessibility to accommodate replacement of the eight spillway tainter gates, which are 37-feet high and 50-feet wide, and to access lifting machinery equipment. This includes wire rope and drum setup, and replacement of high and low-speed gear boxes, 10 horsepower electric motor, bull and pinion gears and the machinery base on each gate pier.

The replacement of the spillway tainter gates and lifting machinery equipment will not affect the operation of the dam’s three hydroelectric generating units, which provide a total capability of 135,000 kilowatt-hours of hydropower.

The public can obtain news, updates and information from the U.S. Army Corps of Engineers Nashville District on the district’s website at www.lrn.usace.army.mil, on Facebook at www.facebook.com/nashvillecorps and on Twitter at www.twitter.com/nashvillecorps. The public can also follow Center Hill Lake on Facebook at http://www.facebook.com/centerhilllake. For more information about Prime American Bridge, go to https://www.americanbridge.net/.