MCMINNVILLE – The phone has been ringing off the hook at Cumberland Caverns lately. Following the news of Bluegrass Underground’s departure from the facility, questions began pouring in.

And, while the cave itself is not moving or shutting down – just some of the questions Kelly Roberts, Cumberland Caverns’ Marketing Director, said she has received recently – there are some big plans in the works.

She recently spoke with the UCBJ to talk about Bluegrass Underground’s departure and what’s next for Tennessee’s natural soundstage.

“We appreciate what Bluegrass Underground brought to the table for so many years,” Roberts said. “They were a big boost to the area.

“It’s time for them to grow and time for us to grow too.”

It’s no secret Bluegrass Underground – which will open a new, permanent venue in The Caverns, located at the base of Monteagle Mountain, near Pelham, Tenn., in early 2018 –  helped boost attendance at Cumberland Caverns. 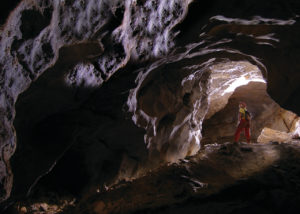 Roberts estimated the event accounted for about 25 percent of the business at the cave but the majority of visitors, she said, come to visit and tour the cave system itself.

Another question she’s received: are concerts at the cave over?

“We are definitely going to continue with the concerts,” Roberts said. “There’s going to be a great lineup announced. We’re putting the finishing touches on that.”

While she cannot give specific details just yet, Roberts hinted that there are plenty of exciting things lined up for Cumberland Caverns music-wise.

Americana, bluegrass, contemporary Christian, southern gospel, and rock acts are lined up for the 2018 concert season. The names of potential performers are being kept under wraps for now but an official lineup is expected to be released in the coming months and is promised to be “phenomenal.”

“We’re really excited to be able to branch off into some of these other areas that have really not been explored,” Roberts said.

The feedback they’ve received so far is also enthusiastic.

“So far, it’s been very positive,” Roberts said. “There’s been lots of interest from producers from all over the country that are wanting to do things in the cave now that it’s open.”

The Volcano Room – the natural soundstage within Cumberland Caverns – offers a pure sound much a recording studio, and is considered one of the top life music venues in the world because of its acoustics and unique features.

There are plenty of activities and attractions slated at Cumberland Caverns including various trail tours and camping opportunities, with a lantern tour coming in October. The facility is open year ‘round, from 9 a.m. until 5 p.m. each day. To learn more about Cumberland Caverns, visit www.cumberlandcaverns.com.