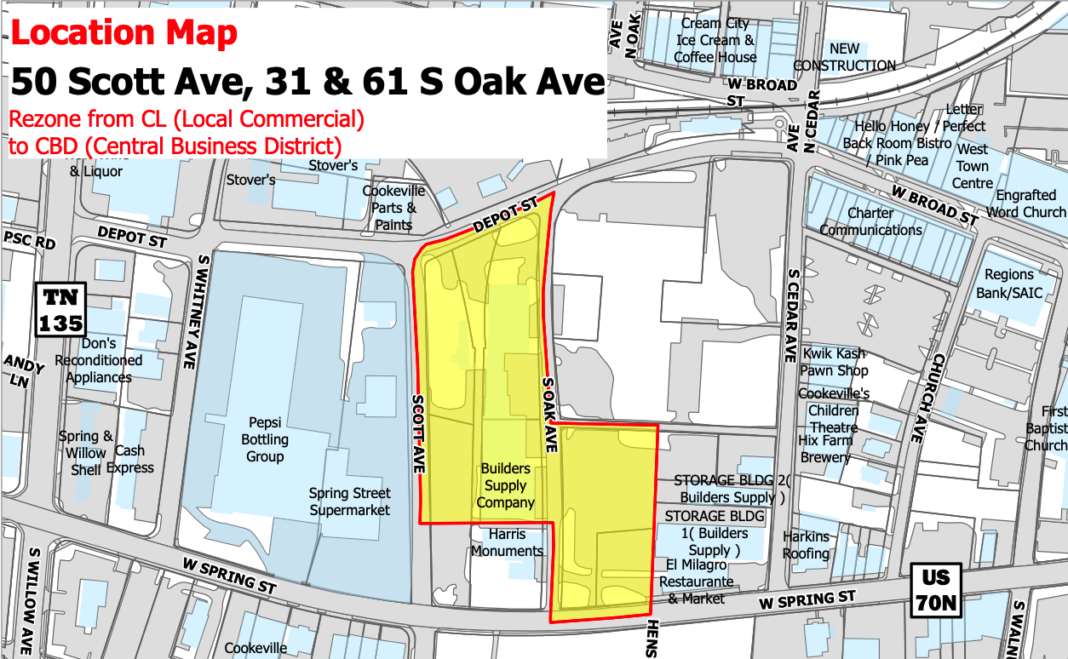 COOKEVILLE – Monday night, the Cookeville Planning Commission approved to rezone the former Builder’s Supply properties from CL (Local Commercial) to CBD (Central Business District) to pave the way for an “urban living” downtown residential development. The request will now be sent to the Cookeville City Council for approval.

Changing the zoning from CL to CBD will allow there to be twice the number of homes built on the property because it reduces the required unit size from 3,000 square-feet to 1,500 square-feet. The rezoning will also eliminate the 30-foot setback required in the CL district and eliminate the lot coverage area that limits development.

The CBD zoning would potentially allow the construction of 175 townhomes on the properties, although Developer Aaron Bernhardt expects there to be less than that.

The planning department has approved the western portion of the property for 91 residential units pending rezoning.

The eastern portion of the property could hold 84 units, but requires the developer to make infrastructure improvements as a condition of approval.

The water quality control department has identified sewer upgrades that would have to be made along Oak Avenue to accommodate the proposed number of units on the eastern side of the properties. Approximately 325’ of sewer line would have to be upgraded from an 8” line to a 10” line.

The sewer component would cost around $50,000, according to Bernhardt.

“If we build 30 homes versus 140 homes, we can disburse the cost over multiple units of townhomes,” he said.

The overall appearance of the development was another concern for the commission.

“It’s going to be a downtown look,” Bernhardt said. “I haven’t put it all on paper yet. It’ll look older but new, all brick, like you see in Nashville, a more commercial look to fit in the west town area.”

When pressed for specifics, Bernhardt said that demographics for people moving to Cookeville right now are “all over the place.”

Bernhardt added, “There’s been several requests from businesses around the area with employees wanting to walk to work. Big companies around the area want the urban feel, a cool place to live. They want to live there and be able to walk directly to work.”

City Planner Jon Ward said, “As long as we improve the pedestrian infrastructure, possibly wider sidewalks, this could be a good development for the city.”

Bernhardt said that the project is in the early stages and that he expects it to be 90 days before they have any specifics. If the city council approves that rezoning, he expects demolition of the existing building to begin in June or July.

Planning Commission Chairman Jim Woodford said, “It sounds very good and promising. I like the idea of having people in our downtown.”

Planning commission member Leslie Sullins Draper added, “It’s a real opportunity that you could make a real showstopper for us and that would be wonderful.”

“That’s what we plan to do,” Bernhardt replied

This is the first joint venture between Bernhardt and property owner Elizabeth Fournet.