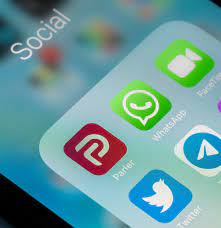 Nashville – Parlement Technologies announced today that it has entered into an agreement in principle to sell Parler, the world’s pioneering uncancelable free speech platform, to Ye (formerly known as Kanye West). Ye has made his fortune through music and apparel and is taking a bold stance against his recent censorship from Big Tech, using his far-reaching talents to further lead the fight to create a truly non-cancelable environment.

“In a world where conservative opinions are considered to be controversial we have to make sure we have the right to freely express ourselves,” says Ye.

The proposed acquisition will assure Parler a future role in creating an uncancelable ecosystem where all voices are welcome. Ye can be found on Parler here.

Parlement Technologies CEO George Farmer welcomes Ye as a compatriot in the fight for free speech.

“This deal will change the world, and change the way the world thinks about free speech,” said Farmer. “Ye is making a groundbreaking move into the free speech media space and will never have to fear being removed from social media again. Once again, Ye proves that he is one step ahead of the legacy media narrative. Parlement will be honored to help him achieve his goals.”

Under the terms of their agreement in principle, the parties intend to enter into a definitive purchase agreement and expect to close during the fourth quarter of 2022. The terms of the proposed transaction would include ongoing technical support from Parlement and the use of private cloud services via Parlement’s private cloud and data center infrastructure.

Parlement serves as the parent company and home of premier free speech social media app, Parler, and leading technology systems, including Web3 and secure cloud services, known as DeepRedSky and Dynascale. The company is a guiding force in the fight against Big Tech, Big Government, censorship, and cancel culture.

Parlement is based in Nashville and has a growing global community of industry trailblazers, product and service providers, content creators, freethinkers and loyal platform users. To learn more, visit https://parler.com or download on the Google Play Store or App Store now.