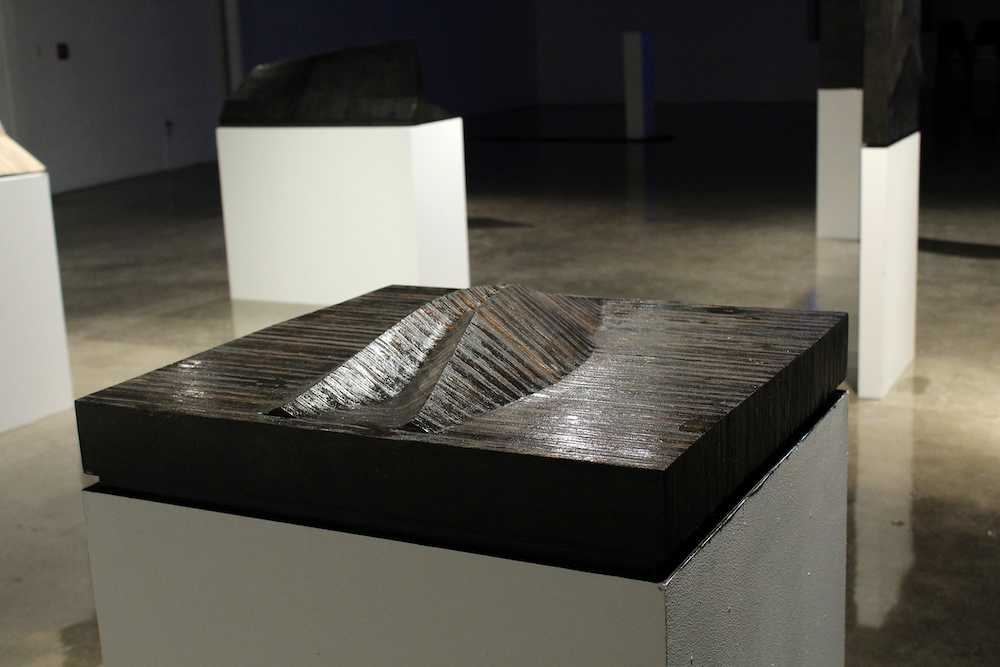 Smithville – Work from the versatile artist Bill Sieber is on display in the Joe L. Evins Gallery of Tennessee Tech University’s Appalachian Center for Crafts until November 21. Pieces from this collection are meant to resemble the reliefs on a topographical map.

Reliefs are the difference between the high and low points that best convey the landscape. The artistic process involves taking cellulose and polystyrene, carving them to form the reliefs, and then encasing the carvings in stained plywood.

“His materials are sourced from home improvement stores,” Brad Silk, ACC exhibition artist in residence, said. Silk explained it was part of an effort to, “create an accessible nature to art making and demystifying the process.”

The artist’s work has been featured in many exhibitions throughout the U.S., online and in Beijing. This exhibition is his fifth with his work as the exhibit’s sole focus and his 39th total having his work in an exhibition.

His evolution as an artist seems to have come full circle culminating in his current exhibit, “Exhume”.

Sieber has a history of working with a wide range of mediums. This is clear when comparing the artist’s different eras. Although his first solo exhibition consisted of mixed media pieces, he has since experimented with glass, cast paper and concrete. His most recent works have been more focused on wood and are an integral part of the “Exhume” exhibition, but it is also clear that he has begun a return to his roots in mixed media art. That can be seen in this current collection of pieces.

The exhibit features work that connects geology and cartography to Sieber’s exploration of artistic methods. According to the article “Torn Between Two Interests, One Student Finds a Way to Combine Art and Geology” from Southern Illinois University, this has long been an inspiration for Sieber.

At one point, he was an undergraduate geology major at the University of Illinois until he discovered a way to combine his two passions and embraced an art major. It is clear from this exhibit that geology continues to play a role in his career by inspiring his work.

Other work by the artist can be viewed at his website billsieber.com