UPPER CUMBERLAND – Come July, the Upper Cumberland will hum with a familiar tune. A rumble. An engine’s roar. A distinctive sound. For the fourth time since 2012, the H.O.G.s are coming to town.

But this year, the event that brings them here – a regional motorcycle rally for the Harley Owners Group – will have a slightly different look and feel, with a larger contingency to boot. And officials expect a greater regional impact than ever before.

The Southern Backroads H.O.G. Rally is a first-of-its-kind event, although the UC has played host to its riders before. Harley-Davidson has eliminated individual state shows in favor of more regional events, and Cookeville is the beneficiary.

“In the past, we had around 45-50 percent out-of-state attendance, but with this new regional concept, we’re anticipating 70 percent or more,” said Gary Bagwell, Southern Backroads H.O.G. Rally coordinator. “And that’s good thing.” 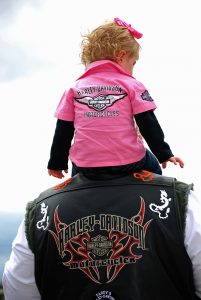 Pre-registration opened in late January. Nearly 1,000 riders signed up by mid-March – with attendees from as far away as Nova Scotia and Australia. And that’s without a major marketing push, said Molly Brown, spokeswoman for the Cookeville-Putnam County Visitors Bureau. Those efforts will kick into full gear as the weather warms, she said.

While there have been no official economic impact studies on previous Cookeville rallies, previous releases have guessed that number to be between $2.5-$3.5 million. Organizers are expecting an even bigger regional ripple effect this year.

Today’s Harley-Davidson riders are affluent; business professionals. They spend more than $300 per day (including lodging) when traveling.

“I like to say there’s four ‘M’s’ to this event. This is a mature group of people. They’re on motorcycles. Very mobile. And they have money in their pockets,” Bagwell said.

Harley-Davidson, Bagwell said, cut the number of rallies from 47 to 16 this year, opting instead for regional events versus individual state H.O.G. rallies – of which Cookeville hosted in 2012, 2014 and 2015.

Due to inconsistencies nationwide, attendance at some events had dropped. State and regional officials announced Cookeville as host city for the Southern Backroads Rally with a big splash in July.

Given the projected number of attendees, riders will make their mark on adjoining cities and counties, too, via “overnight stays as well as retail and fuel purchases from (those) attending the rally,” said Zach Ledbetter, vice president of visitor development at the Visitors Bureau.

Especially as rooms in Cookeville book quickly. The Hampton Inn on Interstate Drive, a host hotel, had just two rooms available at press time. The Holiday Inn Express, located on Bunker Hill Road, Days Inn and LaQuinta had none remaining.

The only logistical challenge, maybe, was in choosing destinations to accommodate larger crowds. Bagwell said they picked “the best of the best” from the three previous rallies. Among this year’s showcase: Cumberland Caverns, Hard Times USA, and Rock Island, among others.

Hard Times USA, an old-timey tiny town located in Van Buren County, was a stop in 2015. Owner Jimmy Yates built it from scratch on a privately owned 700-acre farm. It includes cabins for rent, and replicas, namely a saloon, bank, general store, fire hall and more. The riders, he said, embrace it.

“It’s a group of really neat people,” Yates added. “We serve them lunch, and they just mix and mingle and look around. It’s great publicity; we have cabin rentals, weddings and functions here. And they come back.”

Return visits, after all, are just part of the bigger picture. Bagwell said that the financial impact of the Rally goes beyond “just this one week.”

“The residual impact long term is much greater,” he said. “We’ve already seen the impact of 2012, 2014 and 2015; every year now, we have large groups of riders coming in from Michigan, Missouri, Florida,” who were exposed to the area during previous H.O.G. events.

“That’s an underlying objective of ours,” Bagwell added. “We want to present this five-day packaging in a way that encourages people to return and bring their friends and know that this is a community that embraces motorcycling. It’s no accident that Harley-Davidson chose Cookeville, and it’s because of all the support from the community. That doesn’t happen in big markets. But it happens in Cookeville.”