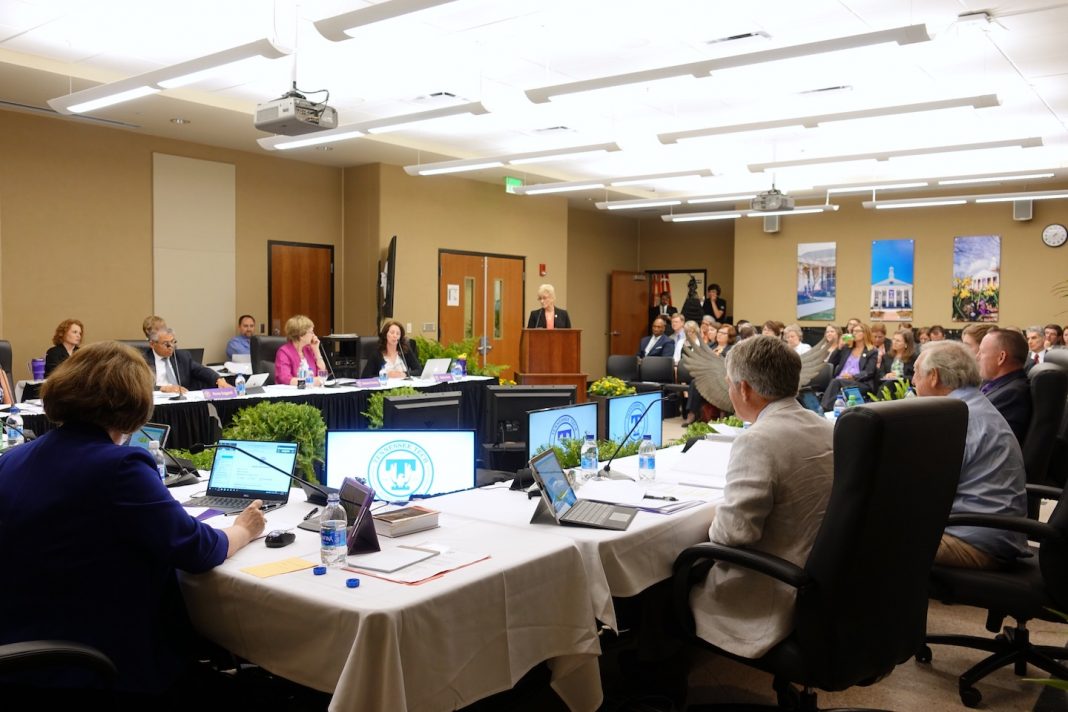 COOKEVILLE (June 15, 2017) – In a full agenda, the Tennessee Tech Board of Trustees approved a nearly four percent tuition and fees increase, voted to establish Tech’s newest academic college, adopted a board policy on free speech at the university, and approved a proposed budget for 2017-2018.

For 2017-2018, an undergraduate student taking 15 credit hours will see an increase in maintenance and mandatory fees of $161 per semester.

The board also approved an increase in select mandatory fees, which are paid by all Tech students. The increased fees are the student athletic fee and the campus recreation fee. The remaining four mandatory fees remain the same as last year. The combined fees will increase $23 for 2017-2018, a 3.9 percent increase.

This year, the Tennessee Higher Education Commission set a legally binding four percent cap on tuition for all state universities and colleges. This authority was given to the commission under last year’s FOCUS Act.

Housing these programs in an identifiable college will help build identity and visibility for fine arts at Tech, strengthening opportunities for recognition of alumni, current students and the strong arts offerings at the university.

The restructured College of Education – with the departments of counseling and psychology; curriculum and instruction; and exercise science, physical education and wellness – will also better align to accreditation requirements.

The free speech policy is in response to The Campus Free Speech Protection Act, which was passed by the state legislature and signed by Gov. Bill Haslam this year. The legislation

requires each public university board to adopt a policy that provides certain protections related to speech on campus. Both the statute and policy reaffirm the First Amendment.

The board approved a 2017-2018 budget of $156 million, including approximately $2 million to cover the state-mandated three percent payroll increase pool. A one percent raise, effective July 1, will be given to all benefitted employees who were with the university by Dec. 31, 2016. The remaining two percent of the pool will be used to fund the university’s compensation plans for faculty and staff, and any raises under these plans will be effective Aug. 1.

In other action, the board approved:

Materials from today’s meeting and the webcast of the full board meeting are available at the board’s website, www.tntech.edu/board.