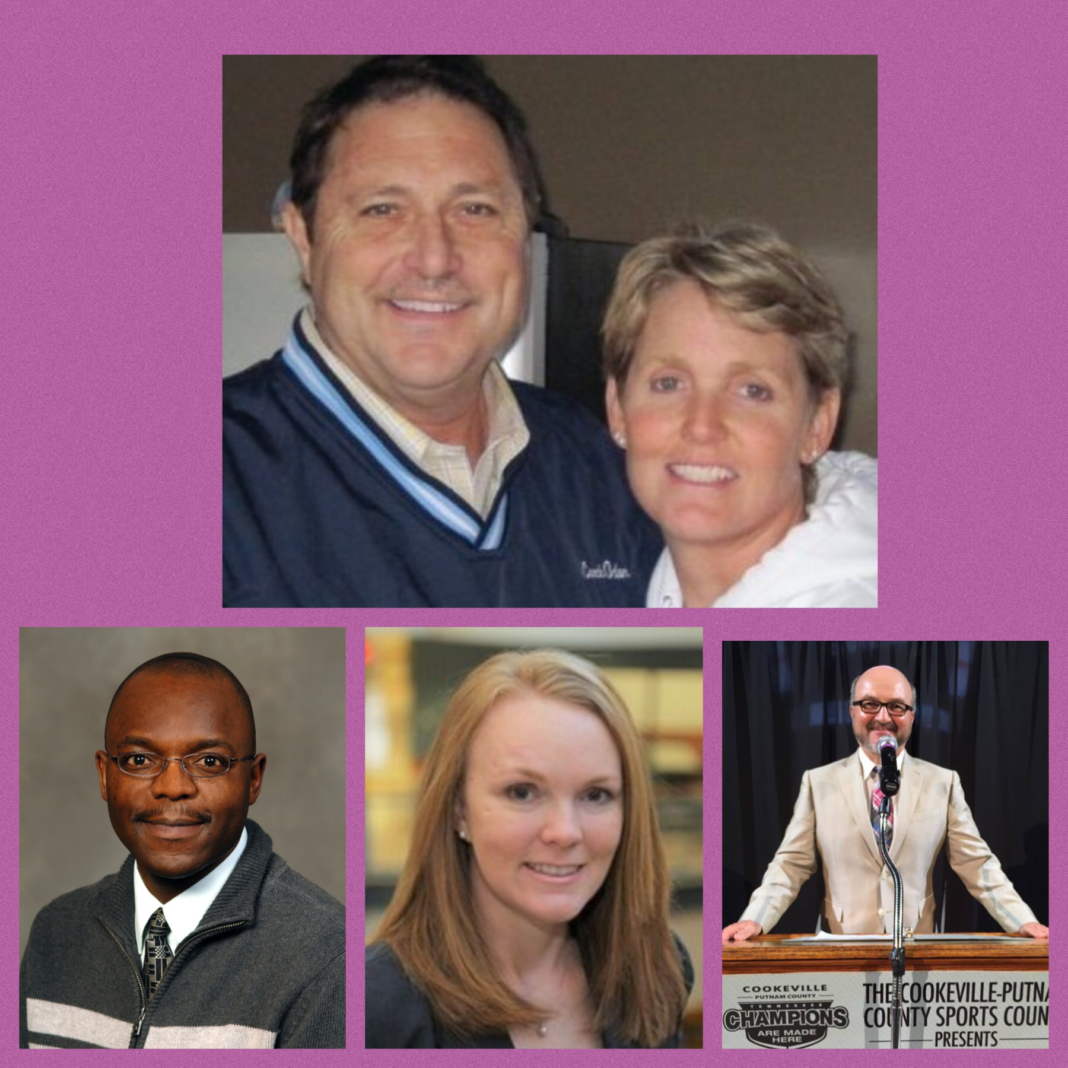 Mark and Mindy Odom, Philip Gibbons, Morgan Chitiyo and Janey Camp will be recognized by Tennessee Tech’s Alumni Association at The Evening of Excellence on Friday, April 12.

COOKEVILLE– On Friday, April 12, Tennessee Tech’s Alumni Association will honor four individuals who have demonstrated professional success or recognition and affect great pride among the faculty, students, and alumni of the university.

The Evening of Excellence is open to the public and will be held in the Tennessee Tech Roaden University Center’s Multipurpose Room at 6:00 p.m.

Since graduating from Tennessee Tech with an M.B.A. and Ph.D. in 2003 and 2005, respectively, Morgan Chitiyo has become a highly-recognized distinguished international scholar and leader in the field of special education.  He also received a bachelor’s degree in geography and religious studies from Africa University in 2000.

Chitiyo currently serves as Professor and Department Chair of Counseling, Psychology, and Special Education at Duquesne University in Pittsburgh, Pa.  He was recently invited by RTI International, an independent, nonprofit research institute dedicated to improving the human condition, to serve on an international panel of researchers in Washington D.C. to explore ways to increase inclusive education opportunities in low- and middle-income countries.

Chitiyo’s research has been published in more than 50 publications and he has presented at more than 60 national and/or international conferences. In 2014, he received the Duquesne University School of Education Faculty Award for Excellence in Scholarship, and in 2017, he received the Presidential Award for Excellence in Service to the Mission from Duquesne University.

At first glance, Janey Camp is not unlike many Tennessee Tech alumni who grew up in the middle Tennessee area.  She was a first-generation college student and stayed in the middle Tennessee area after graduating from Tech.  She stands out among many others, however, in what she has done since receiving her degrees.  Camp received a bachelor’s degree in civil engineering in 2002 and master’s degree in civil engineering in 2004 from Tech and went on to earn a Ph.D. in environmental engineering from Vanderbilt University in 2009.

Mark and Mindy Odom have become a pair of the most important benefactors in the history of Tennessee Tech Athletics.  But their support extends far beyond their philanthropy.  They give of their time and talent as well and have held Tennessee Tech season tickets since 1979.

Mark graduated in 1978 with a bachelor’s degree in civil engineering.  He is the Area Construction Manager with Rogers Group Inc. in Cookeville and the former Vice President of Highways Inc. in Cookeville.  Mindy was a member of the Golden Eaglette women’s basketball team and played for Coach Marynell Meadors.  She helped Tech win two Ohio Valley Conference regular season titles and one OVC tournament title and make one appearance each in the NCAA Tournament and Women’s National Invitation Tournament.  Mindy won the most valuable player award following her freshman season and was named team captain for her senior year.  She earned a bachelor’s degree in health and physical education from Tech in 1985 and a master’s degree in administration and supervision in 1994.  She went on to coach women’s basketball for 33 years, spending four seasons as assistant coach at Tech under Bill Worrell and 25 years as head coach of the Cookeville High School Lady Cavaliers.  She is now a physical education instructor at Prescott South Middle School.

The Odoms established the Mark and Mindy Odom Eaglettes Scholarship Endowment at Tech, are 37 years True to Tech, and are members of the President’s Club and Visionaries Society.

“Let’s welcome our Tennessee Tech Golden Eagles!” is how Philip Gibbons has welcomed the crowd at Tennessee Tech football and basketball games since 1982.  While many fans may not know his face, they’ve heard his voice in Tucker Stadium and Hooper Eblen Center for 37 years.

Gibbons’ 45-year career in radio has reached nearly everyone in the Upper Cumberland.  He is the Program Director for WGSQ-FM and hosts the midday show on 94.7 FM The Country Giant.  The station has won seven CMA Radio Station of the Year Awards in the Small Market division, and Philip has been nominated for the CMA and ACM Personality of the Year Award.  He has been a guest announcer at the Grand Ole Opry for the past 10 years and has been a stage host for the CMA Music Festival.  He was recently elected for induction into the Tennessee Radio Hall of Fame for the 2019 class.  (The inductee ceremony will be held Aug. 3, 2019, in Murfreesboro.)

In the community, Gibbons plays an active role working with the Tennessee Alzheimer’s Association, the Cookeville Rescue Mission, the Algood Lions Club, the Susan G. Komen Race for the Cure, and was part of a team that helped raise more than $1 million for St. Jude Children’s Research Hospital.  He is an honorary member of the Shriner’s Club and has served as Master of Ceremonies for numerous local and regional events.

To register, visit www.tntech.edu/univadv/cac/registration-alumniawards or call 931-372-3205.  The deadline to register is April 5.  The Evening of Excellence is part of Wings Up Weekend, a weekend of events, both on campus and in the community, for all ages.  The full listing of Wings Up Weekend events can be found at www.tntech.edu/wingsupweekend.