NASHVILLE – Are you ready for the ‘Roo? The annual Bonnaroo Music and Arts Festival will soon take place in the city of Manchester, Tennessee.

Since its beginning in 2002, the four-day, multi-stage event continues to be one of the most popular live music festivals in the country, attracting thousands of attendees. To fully enjoy the varied lineup of performers and musical styles that Bonnaroo has to offer, festivalgoers from all over the country camp out on a 700-acre Middle Tennessee farm, making it their temporary home for four days.

As in years past, tens of thousands of music lovers are expected to attend the 2018 Bonnaroo festival, which kicks off Thursday night, June 7, and winds down Sunday night, June 10.

During the Bonnaroo Festival, the area in and around Manchester sees increased traffic volume as festivalgoers make their way into the festival site.

As Manchester prepares to welcome a multitude of visitors, the Tennessee Department of Transportation and the Tennessee Highway Patrol are gearing up for the extra traffic expected in the area. TDOT and THP are working closely with the Manchester Police Department, the Coffee County Sheriff’s Department and festival promoters to keep traffic moving on I-24 while also getting Bonnaroo attendees to their destination.

“TDOT has once again coordinated with our partners at THP and other agencies to ensure safe, efficient travel during the Bonnaroo festival,” said TDOT Commissioner John Schroer.  “The main objective is to keep through traffic moving smoothly on I‑24 while getting festivalgoers safely into and out of the Bonnaroo site. Because of advance planning, we feel certain that we can successfully minimize traffic delays throughout the weekend as we have in past years.” 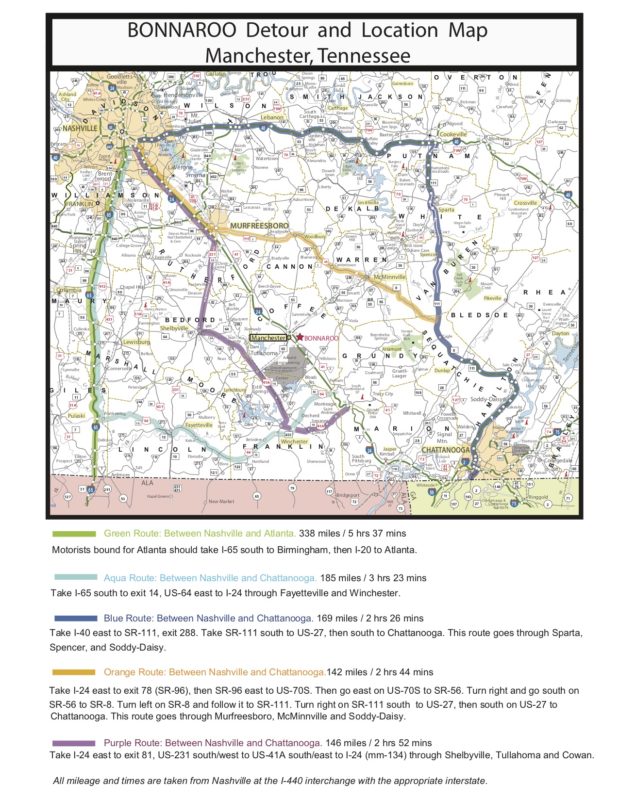 This year, Bonnaroo will officially open all its gates on Wednesday evening June 6 at 8 p.m. to allow more time for vehicles to enter the campgrounds. State Troopers will be on-the-job 24 hours a day, beginning Wednesday evening, patrolling on the ground and by air.

Also, drivers should keep in mind that if they need the assistance of a state trooper while traveling anywhere in Tennessee, they can simply dial *THP (*847) from their cell phone. They will be automatically connected to the nearest THP dispatch office and the operator will send a state trooper to their location.

“The number one goal of the Tennessee Highway Patrol (THP) is to reduce traffic related incidents and fatalities,” said THP Colonel Dereck Stewart. “I have emphasized a statewide priority to our captains the importance of working closely with TDOT and our public safety partners. So think twice if you are planning to drive under the influence of alcohol or drugs, because troopers and local law enforcement will be looking for you. Always wear your seatbelt, and do not drive distracted. The Tennessee Highway Patrol is committed more than ever to reducing crashes and saving lives on Tennessee roadways.”

TDOT HELP units will assist with traffic management during the festival and will aid any motorists who require assistance. In addition to having HELP trucks on-site, TDOT and other agencies will be taking the following steps beginning Wednesday, June 6 through Monday, June 11:

During the festival, motorists should call 511 from any mobile or land line phone for traffic updates or visit the TDOT website at www.tn.gov/tdot where they can also find information on alternate routes.  From your desktop or mobile device, get the latest traffic information and live streaming SmartWay traffic cameras at www.TNSmartWay.com/Traffic.  TDOT is also on Twitter.  For statewide traffic tweets follow TN511 or for regional traffic information follow Nashville511, Chattanooga511, Memphis511 andKnoxville511.