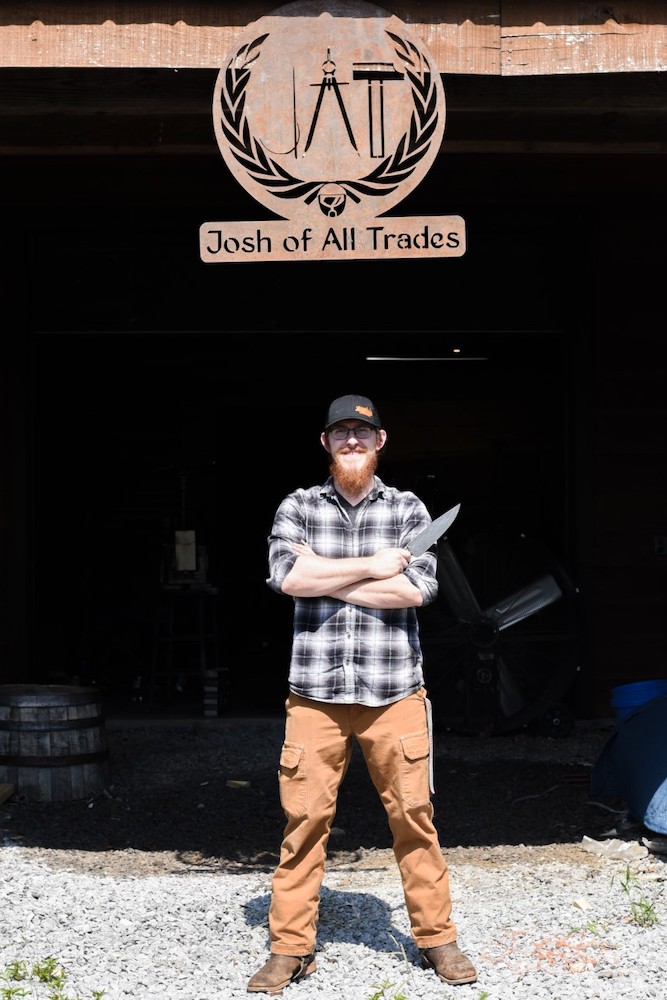 His journey to the show, however, was not a traditional one. The opportunity to be on “Forged in Fire” was one Foran participated in as a learning experience and a chance to improve his blacksmithing skills. Before the show, he could be found showing his skills at smithing events and family gatherings.

Foran is originally from outside Detroit Michigan, but moved to Tennessee for college. His family has roots in Morgan County in East Tennessee.

The manufacturing and industrial technology program, now known as engineering technology, has continued to grow at Tech since Foran’s time as a student.

“I’ve always been interested in metal fabrication. While at Tech I took welding, machining and metal casting,” Foran said.

He works as lead design engineer at Fields Auto Works where he makes production level CAD models for their vehicles and designs and reverse engineer components.

“I chose Tech because I’ve always been into racing and fabricating and I was drawn to the Formula Society of Automotive Engineers program,” Foran said. “It was small at the time and was an excellent opportunity to get exposed to designing and building a racecar. Now I’m doing it for a living.”

Foran worked six and one-half years as an engineer for Honda Manufacturing of Alabama where he reviewed new model drawings, and proposed design changes based on past problem history, assembly concerns and preventing new issues.

“The MIT program actually gave me a good foot to stand on in that industry working directly with manufacturing to improve processes and installation of components. Honda also had an associate run race team that raced professionally,” Foran said. “I was able to be a part of that and build and race cars. I raced professionally for Honda for two years in the Pirelli World Challenge.”

He then went to work at Shape Fidelity using 3D scanning for inspection and reverse engineering for the space, aerospace and defense industries. He was there for three years as the metrology manager.

“Now I’m at Fields Auto Works helping to get the cars and CAD models ready for production manufacturing,” Foran said. “And with the blade smithing, I get to use what I learned in physical metallurgy and heat treating.”

Ironically, while at Tech, Foran was unaware that Tech had quite an established blacksmithing program while he was here. It wasn’t until he moved to Alabama and found the Alabama Forge Council where he was able to try his hand at blacksmithing.

Foran said he had thought blacksmithing was a dying craft, but because of the new influx of interest, it is booming right now. He recently took a class at the Appalachian Center for Craft in Smithville and said he was very impressed with the program.

“I actually just met Jay at the spear forging class at the Tech craft center. I love his work and look forward to firing with him again,” Foran said. “He’s a journeyman smith with the American Blade Smithing Society. I hope to test for my JS in the next two years.”

Foran said a favorite memory at Tech was going to the FSAE competition in Michigan and he really enjoyed Fred Vondra’s foundry class.

“Next in my career is to keep building awesome race cars with Fields Auto Works, keeping up with the farm and always learning and improving my blacksmithing and blade smithing,” Foran said.

He lives in Alabama with his wife Ashley, on the Foran Family Farm, a small farm with cows, chickens and quail, and they grow a market garden.

“I’m grateful for my time at Tech and the doors it opened for me. I did my co-op for a year at Volkswagen Chattanooga, and because of that I had excellent job offers right out of the door,” Foran said. “The FSAE program gave me a good basis to build on for my metal fabricating and racing interests.”

Foran’s work can be found on his website, joshofalltradesblacksmithing.com.